Day 4 of TCM’s Summer Under the Stars devotes 24 hours to the screen work of Mary Boland, a character actress best known for her collection of flighty wives, mothers and society women in movies of the 1930s and into the ‘40s.

More specifically Boland is best known for her 1930s screen pairings with Charlie Ruggles, but since all fourteen of those movies came at Paramount this winds up being the most underrepresented portion of TCM’s Boland celebration. With one major exception, Leo McCarey’s wonderful Ruggles of Red Gap (1935), which plays in TCM's highly viewed 8 pm EST time slot Sunday and features Boland and Ruggles in the very best of their team-ups.

With Charlie Ruggles otherwise missing in action we’re left with better remembered blockbusters The Women (1939) and Pride and Prejudice (1940) as the two most beloved Mary Boland titles airing on TCM Sunday. They both play late, back to back beginning with The Women at 11 pm EST.

I also want to recommend The Solataire Man (1933) at 11:45 that morning, not necessarily for Boland, though she has a major role in this fun MGM pre-Code that I previously wrote about HERE.

Marie Anne Boland was born in Philadelphia, PA, January 28, 1882. She grew up in Detroit, her father’s native city, where she went to school at Sacred Heart Convent. William Boland was an actor and his daughter, whose Philadelphia birthplace is attributed to William’s work route, soon followed in his footsteps.

Mary Boland made her stage debut in A Social Highwayman for the Pike Stock Company in Detroit, June 24, 1901.

Mary remained with the Pike company for the following season in Cincinnati and then worked for the Boyle Stock Company in Nashville during the 1902-03 season. In 1904 she appeared in something called Sky Farm before spending a short time with the Baker Stock Company in Los Angeles.

Mary Boland kept very busy during the 1904-05 season beginning with the Imperial Theatre Stock company in Providence, RI before moving on to a role supporting Virginia Harned in The Lady Shore. Boland’s first big break came when she became Robert Edeson’s leading lady in Strongheart, a play by William C. de Mille. The pair toured in this play for over two years, including time at the Aldwych Theatre, where Mary made her London debut.

Boland’s career continued to progress after returning to America and Broadway where she soon found herself under the employ of Charles Frohman, for whom she’d play in support of Dustin Farnum in The Ranger during the 1907-08 season.

After this Mary Boland achieved her greatest fame to date by becoming leading lady to the great John Drew. Drew is best remembered today for preceding his famous niece and nephews, who also took up the family business: Ethel, Lionel and John Barrymore. Mary Boland was John Drew’s leading lady for nine plays at the Empire Theatre from 1908 through 1914. It was a distinction that would top any mention of Boland in the press throughout the 1920s and until reestablishing herself on the screen in the early 1930s.

It was after her time as Drew’s leading lady that Mary Boland tried the movies for the first time. She acted in eight silent films between 1915 and 1920, getting her start in Willard Mack’s company and later co-starring with Frank Keenan.

Boland also continued to act on Broadway during this period, eventually scoring a role in the hit Clarence, a Booth Tarkington comedy that ran for 300 performances during 1919-20. With the success of Clarence, Mary Boland left the movies behind for a time to spend the 1920s back on Broadway, appearing almost exclusively in comedies throughout the decade.

Hits included Meet the Wife and Cradle Snatchers, each of which, incidentally, included young Humphrey Bogart in the cast. Boland played a major part of Bogart’s early ups and downs, promising the 24-year-old actor, “you’ll never work in another play with me,” after Bogie flubbed his lines during Meet the Wife (Sperber 32). She relented from this vow just a little over a year later after casting Cradle Snatchers proved more difficult than expected.

While Boland had been portrayed as a young beauty at the start of her career and a major leading lady during the following portion, the bulk of the 1920s saw Mary Boland, now past forty, portrayed in the press much as she would be during her later movie career. “I’m not a bit funny, off stage,” the noted comedienne declared in a 1926 interview in which she also confessed, “The terrible fact is that I’m old-fashioned and, I fear, normal and commonplace. I like dogs and old gold and I’m fond of my mother in a very old-fashioned manner.”

Boland hoped the reporter didn’t expect a barrel of laughs from her and, more importantly, stressed that she was being serious while they talked. “I think the saddest part of getting a reputation for being funny is living down the reputation.” The flip side to her fame was that, “I sometimes feel that I could begin weeping and that everyone within eyeshot would burst into laughter, quite sure that I was just trying to be funny.”

Off her success in The Vinegar Tree on Broadway, Boland returned to the movies signing a contract with Paramount in late 1931. While she occasionally returned to Broadway, Mary Boland largely spent the next two decades in the movies. Over half of the forty plus talkies she’d appear in came for Paramount and over half of those again, fourteen in all, came with co-star Charlie Ruggles.

In his Actresses of a Certain Character, Axel Nissen compares Boland with similar players of her time, Billie Burke, Alice Brady and Spring Byington, noting the subtle differences between each of these women who all portrayed similar parts during this period. Indeed, Boland has always seemed like a low rent version of Burke to me, though elevating herself to equal status when given opportunities in big budget Hollywood roles such as The Women (1939) or Pride and Prejudice (1940).

Mary Boland is third from the left in this shot from PRIDE AND PREJUDICE on this 1940 Max Cinema Cavalcade Tobacco Card from A & M Wix.

Perhaps more of those higher profile supporting roles were to follow, but Boland’s career was temporarily interrupted by injuries suffered in a November 1940 car accident that also saw her on the receiving end of a $50,000 lawsuit from the other party. Boland wound up settling the case for a little over $10,000.

Back in the theater in 1942 she ran into a rash of negative press after refusing to go on stage for The Rivals in Chicago that March. Boland claimed she had been suffering from pneumonia for some time and that she had performed earlier on the tour in St. Louis against doctor’s orders. By Chicago she said she “simply couldn’t go through” with her part. Actor’s Equity temporarily barred her from appearing on stage, screen, radio or even in night clubs, though Boland’s case was settled only about a month after the Chicago blowout and all restrictions were lifted. 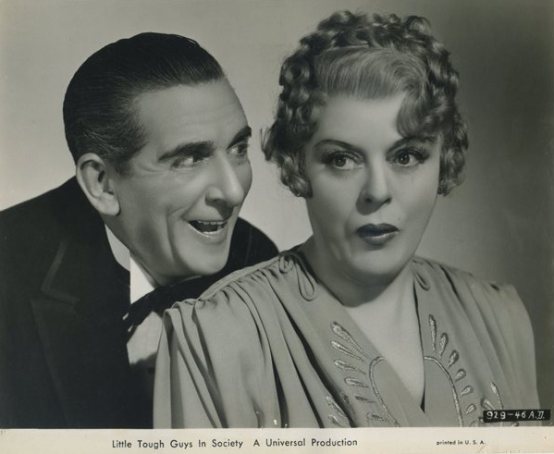 Mary Boland at the right with another popular character actor, Edward Everett Horton, on this still photo for LITTLE TOUGH GUYS IN SOCIETY (1938)

She appeared in only a few additional movies, but memorable parts that included In Our Time (1944), which saw Ida Lupino as her traveling companion; Nothing But Trouble, a late Laurel and Hardy film that same year; and a little later, hilarious in a small supporting role in the Greer Garson-Walter Pidgeon comedy, Julia Misbehaves (1948).

Boland looked to return to the stage, puzzling playwright Moss Hart, who asked why she wanted to rent her house in Hollywood. “Because when I come home to it at night, after a day at the studio, there’s no one saying to me, ‘Darling, you were great tonight. You milked the most wonderful new laughs out of your lines’” (Lyons).

But Boland was a senior citizen by now and her career began winding down as the 1950s progressed.

She appeared against type in her final film, the film noir Guilty Bystander (1950), but was back to comedy for her final Broadway appearance in Lullaby, which ran for 45 performances at the Lyceum in early 1954. She made a few guest appearances on early ‘50s television, with her final bit of work a reprise of her Countess DeLave in a 1955 “Producers’ Showcase” adaptation of The Women on NBC. 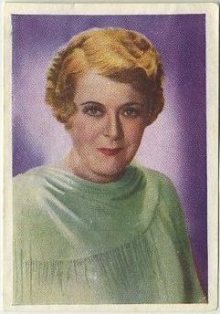 Mary Boland never married nor had any children, but seems to have had a happy existence away from the cameras. After her retirement she quietly split time between hotel residences in Beverly Hills and New York. Her New York apartment was said to overlook Central Park. The papers reported her recovery from a 1959 abdominal surgery she underwent in Hollywood, but otherwise nary a peep was heard from the formerly busy actress after her retirement until the time of her death.

Mary Boland spent over fifty years in show business, a career her Associated Press obituary called, “a colorful era — from horse and buggy days on Broadway to the frantic tempo of mid-century Manhattan, from Hollywood’s early, jerky silent films to modern sound productions.”

Punctuate that with her forays into early television and Mary Boland’s lengthy career spanned the most exciting half-century in the history of show business.

Enjoy Mary Boland on TCM today and be sure to check out what other film bloggers are talking about at the Summer Under the Stars Blogathon at Sittin' On a Backyard Fence and ScribeHard on Film.

The Films of Mary Boland and Charlie Ruggles