You are here: Home / Movie Reviews / Charles Laughton as Ruggles of Red Gap (1935)

The cast of Ruggles of Red Gap is filled with some of the best comedy character actors of the era ... and Charles Laughton as the funniest one of them all. 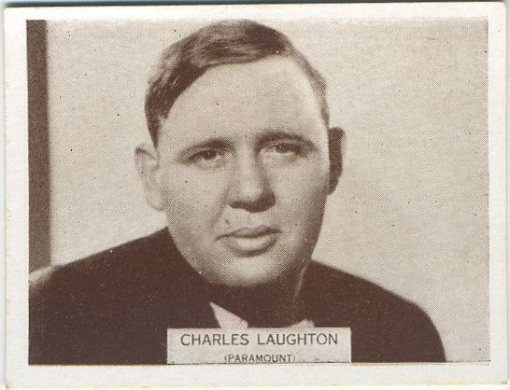 Set in 1908, Charles Laughton plays Marmaduke Ruggles, a gentleman's gentleman, who has always been just plain Ruggles to his master, the British Earl of Burnstead. Since the Earl is played by Roland Young he is far from respectable and so the film opens with his breaking the news to Ruggles that his ownership has been transferred to the Floud's as, ahem, the results of a poker game with Egbert Floud.

Through Laughton's masterful eye rolling and puckered lips we pretty quickly get the idea that being handed over to the Floud's is not a step up in society. No, the Floud's are first off, American, and second off Egbert is check-wearing Charlie Ruggles who's married to aspiring socialite Effie, played by Mary Boland. Ruggles of Red Gap is one of 14 movies pairing Ruggles and Boland together in the 1930's.

Upon returning from Europe to untamed Red Gap in the state of Washington we meet the rest of the cast including Maude Eburne as earthy Ma Pettingill, lovely pre-code starlet Leila Hyams as the somewhat castigated Nell Kenner.

Nell is portrayed as a popular young woman who simply likes to host parties and sing for her crowd of friends, but I'm pretty sure this is the production code's way of identifying her as the town madam. In fact, Wes D. Gehring's 2005 title "Leo McCarey: from Marx to McCarthy" thinks the same, so even if I'm incorrect in my assumption I don't feel alone.

McCarey, director of comedy legends such as Laurel & Hardy and the Marx Brothers, would later win the first of three Oscars for the fantastic Irene Dunne-Cary Grant picture "The Awful Truth" (1937), picked up two more statues for both writing and directing of 1944's "Going My Way" with Bing Crosby, and find himself nominated another five times. Oscar wasn't quite ready for McCarey by 1935's Ruggles, but the film itself was nominated for Best Picture, which wound up being awarded to "Mutiny on the Bounty" (1935) that year.

Back to the movie itself, rounding out the main cast is the cook at Nell's place, Prunella Judson, played by ZaSu Pitts, who is long from her masterful performance as Trina in Greed (1924) and well into the run of goofy comedy roles she's mostly remembered for today. It may be that ZaSu simply isn't my cup of tea, but hers is the one role in Ruggles of Red Gap that I really would have liked recast. Her Prunella is just a little too silly for me and her performance stands out as the least natural of any of the main actors.

It's on the American frontier in the company of these free spirits that Laughton's Ruggles comes to appreciate his own independence. Slowly casting off the chains of his voluntary, but at the same time inherited, position of servitude, the hitherto stuffy and complacent Ruggles is slowly pulled from his state of supposed satisfaction partially through the good intentions of Egbert and Ma and especially through his feelings for Pitts' Prunella.

Another big help in setting Ruggles free was the mistaken impression spread throughout Red Gap by reporter Jake Henshaw (Clarence Wilson) that Ruggles was a British Colonel. Once that rumor spreads, which is basically as immediately as it is uttered, Ruggles' main foils, Boland's Effie and her brother Charles Belknap-Jackson (Lucien Littlefield) are forced to relent on their plan to fire Ruggles and send him away.

Belknap-Jackson did in fact get so far as handing Ruggles his walking papers, but in the most poignant moment of the movie, Ruggles is reassured of his position by Egbert and Ma at the town saloon after Egbert asks "What was it that Lincoln said at Gettysburg?"

We work our way through the entire bar with the question being passed like a hot potato. The answer is not revealed until we swing back to Laughton's Ruggles who stands proudly mumbling Lincoln's Gettysburg Address to which Egbert declares, "That's it!" Egbert gets Ruggles to speak up and recite the Address clearly while all in the bar lumber towards the British servant to take in the important words and watch Ruggles reborn.