Note: I just kept finding neat images to include in this post so please do be sure to make it down to the "More Drews and Barrymores" section towards the bottom for some of my favorites.

I recently split an October 1907 issue of the Burr McIntosh Monthly and was stopped in my tracks by this familiar profile:

Not so very far from this, is he?

Drew, Jr., was a major star, so successful that he'd eventually be dubbed "The First Gentleman of the American Stage." He was the second born child of Louisa Lane and the elder John Drew. His own daughter, Louise Drew (1882-1954), is pictured below to the right of Marion Lorne in 1909's "The Flower Shop." She would marry the actor Jack Devereaux (1881-1958) just before he went off to war in 1917.

But we're getting a generation ahead of ourselves. The first child born to Louisa Lane and John Drew, Sr., Louisa Drew (1852-1888) somehow avoided the stage, but she did however marry an actor, Charles Mendum, and had two children, one of whom, Georgie Drew Mendum became a musical-comedy performer.

--followed her elder brother's footsteps to the New York stage in 1876 where she established herself as a popular comedienne. Georgie Drew soon married her Pique co-star, born Herbert Arthur Chamberlayne Blythe, but by then already known as--

--Maurice Barrymore (1849-1905). Georgiana and Maurice would have three rather famous children, but before we get to them there's the matter of this fellow leftover from that earlier generation:

Sidney Drew (1863-1919), whose exact origins appear to be somewhat in question. Appearing on the scene shortly after the death of the first John Drew, matriarch Louisa Lane said she adopted him, but it's also speculated that she actually gave birth to him either by the late John or most likely by another party altogether. Sidney also took to the stage and the screen with his wives, both billed as Mrs. Sidney Drew. The first, Gladys Rankin (1874-1914), predates my early movie collectibles, but the second, Lucile McVey (1890-1925), shows up quite a bit:

Other than that glimpse of John (Barrymore, that is) up above, we haven't even reached the best known of the bunch yet. But I think it's important to remember that all of those folk pictured above were huge stars in their day. Outside of the last couple their fame pre-dates film, but these were the celebrities of the 19th Century. Matriarch Louisa Lane worked with stage stars even better remembered today than she is, actors such as Edwin Booth and Joseph Jefferson.

What's interesting about this group is they seem to have remained somewhat close, working together, even living together. John Kobler, in his, Damned in Paradise: The Life of John Barrymore

, writes about Louisa Lane's full house during the period just before John Barrymore's 1882 birth that it: "...had become too populous for comfort when every member of the Barrymore-Drew clan was in town at the same time, what with ... Maurice and Georgie Barrymore, John Drew ("Uncle Jack"), Sidney Drew ("Uncle Googan") and a platoon of servants" (27, nicknames presumably given by John Barrymore). What a fantastic time it must have been, fame behind them, fame in front of them and even more soon on the horizon.

Much is written elsewhere on this site of those three children of Maurice Barrymore and Georgiana Drew, so we'll just continue with the photos for now. There was, Lionel Barrymore (1878-1954):

While Lionel was first to the stage younger sister Ethel Barrymore (1879-1959) was the first to stardom:

And then there's the youngest, John Barrymore (1882-1942), who's shown again here, his most respected period of work already behind him, with his third wife, Dolores Costello (1903-1979), on the cover of Filmjournalen Magazine.

I won't travel any closer to present from John Barrymore and Dolores Costello other than to say this is the line that heads directly to their granddaughter, Drew Barrymore. Let's rewind for a moment though, Dolores Costello and her sister Helene (1906-1957) were child actors during the 1910's:

Which is none too surprising considering their parents were both actors as well, mother Mae Costello (1882-1929), and more notably star of stage and screen Maurice Costello (1877-1950): 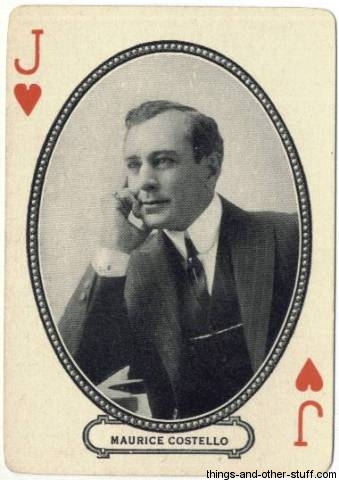 Both Costello girls would return to the screen after adolescence in the 1920's, each earning the distinction of being a WAMPAS Baby Star, though Dolores, first by virtue of her entrance to the Barrymore clan and some plum roles opposite John, and later through an impressive mini-run of character roles in the talkies, would be the brighter and better remembered star.

And there you have it, while a little jumbled, hopefully this stands as a somewhat comprehensible Photo Family Tree showing just how all those Drews, Barrymores, and Costellos are linked. The images of Louisa Lane and John Drew (I) at the top of the post are from 1899's Autobiographical Sketch of Mrs. John Drew (as are others below). The photo of Georgiana Drew Barrymore come from a larger photo inside the Kobler book mentioned earlier. Maurice Barrymore is from 1896's Famous American Actors of Today by Charles E. L. Wingate. The Louise Drew and Marion Lorne photo is from a 1909 edition of Burr McIntosh Monthly found on Wikipedia. (Note: Wikipedia gives Louise Drew's date of death as 195?--it's actually April 24, 1954 according to the newspapers.) The other images are all vintage collectibles that have passed through my hands, some of which may still be available inside the Immortal Ephemera Store.

Finally an interesting Sidney Drew item from after his passing. Illustration by James Montgomery Flagg, poem by Leonora Speyer.

The above appeared at the front of the Life and Letters of Sidney Rankin Drew, published 1921. Drew's son by his first marriage, Sidney Rankin Drew was an actor himself and according to the second Mrs. Sidney Drew, who edited the book and wrote the preface, was a member of the Lafayette Flying Corps and "the first American actor killed in the World War." Sidney Drew wanted this published very badly, but he died in 1919 leaving the task to his son's stepmother who by this point goes by Lucile McVey Drew.

And now the earliest shots I could find of Maurice and Georgie's famous children. First up, Ethel Barrymore, approximately age 16, from inside the pages of Munsey Magazine, sometime in 1895:

Next, eldest Lionel at age 25, from a Burr McIntosh Studio photograph printed inside a 1903 issue of Munsey's:

Lionel is the Italian organ-grinder in "The Mummy and the Hummingbird" co-starring Uncle John Drew.