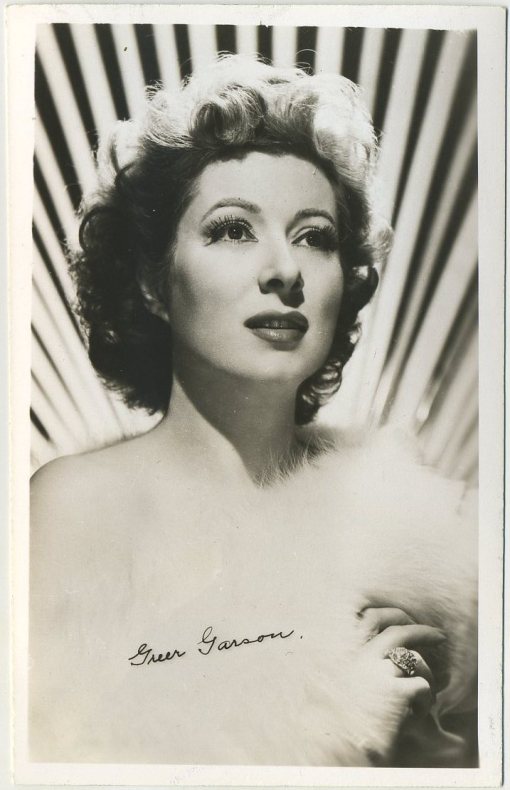 Academy Award nominations were nearly an annual occurrence for Greer Garson between 1940-1946. She was nominated for Best Actress six times during this seven year period, yet somehow the Academy missed both Pride and Prejudice (1940) and Random Harvest (1942). Well, Random Harvest wasn't so much a miss as it released during the same calendar year as Mrs. Miniver (1942), the film which would win Miss Garson her only Oscar statuette.

This stunning record of achievement and recognition was further enhanced when 15 years later the British born beauty earned her seventh and final Academy Award nomination for playing one of America's most famed First Ladies as Eleanor Roosevelt in Sunrise at Campobello (1960).

Since I'm naming several of Garson's greatest hits her other Oscar nominated titles, in reverse chronological order, were: The Valley of Decision (1945), set around a 19th century Pittsburgh steel mill and covered in full here; Mrs. Parkington (1944), which traces the life and love of Greer as title character with favorite co-star Walter Pidgeon and covered in brief here; paired off with Pidgeon again in Madame Curie (1943) for more of the same, except with a historical basis this time; Blossoms in the Dust (1941), yet another biopic with Pidgeon, starring Garson as real life child's rights advocate Edna Gladney; and, in her feature film debut, as wife of Robert Donat's title character in Goodbye, Mr. Chips (1939), which will be covered in more detail in a moment.

"And from London comes news of an actress whose stage failures won her a film contract. She is Greer Garson, aged 25 years, who had never appeared in a play that ran for more than three weeks. She was 'discovered' by Noel Coward and she is now the proud owner of a seven-year Hollywood contract" (Axford)

The wording isn't very flattering as Coward's discovery led to Garson's being cast in his Mademoiselle. That one was a hit that lasted over four months before the general economic conditions closed it in London and sent it out on the road (Troyan 56). But the overall sentiment of the Axford quote is correct in that Garson had largely built her reputation on the London stage for personal triumphs in what were flop shows.

After some difficult negotiating MGM signed Greer Garson to a seven-year contract in September 1937. Goodbye, Mr. Chips, her debut feature film, would not be released for another 20 months. In between was a long and arduous wait for the right part capped by a period of illness before, ironically, Garson set sail back to Britain for the filming of Goodbye, Mr. Chips at Metro-Goldwyn-Mayer's British Studios. She became known as "the actress who traveled 12,000 miles to get a job" (Harrison).

But it would be worth the wait.

Garson's Kathy does not appear in Goodbye, Mr. Chips until nearly 40 minutes into the film. Star Robert Donat's Charles Chipping begins as shy and reserved schoolmaster at Brookfield, an all boys' school, prior to finding her. Young Chipping had been tread upon by students and fellow faculty alike. While giving the new history master a pep talk at the beginning of the film, elderly Chipping confesses to having had his own troubles early in his career but agrees with his young colleague that he did eventually find the secret to overcoming those woes. "But I didn't find it myself," he tells him. "It was given to me. By someone else. Someone else."

We go back in time for the story of how Chipping was transformed into Mr. Chips, meeting the someone else who was responsible along the way.

He finds her while mountain climbing in Austria. Mr. Chips, as Garson's Kathy soon dubs him, had not known many women and certainly none like Kathy. Greer Garson manages to somehow penetrate the darkness and mist of the mountain that strands them to capture our hearts along with that of our dear fuddy-duddy Mr. Chips. Before the mist clears and they descend that mountain there can be no doubt that the character of Kathy is a special woman and, what's more, newcomer Greer Garson is a special actress. Her star quality breaks that mist and we're soon rooting for Chips to gather the nerve to romance her.

They are married by the time Chips returns to Brookfield and in a touching scene Chips introduces Kathy to fellow staff, who had expected much less in Mrs. Chipping but are instead bowled over by Mrs. Chips' youth, charm and beauty. The same goes for Chips' boys, who doff their caps for the lovely new lady on campus and become weekly visitors for tea at her invitation, a tradition which will last long beyond Mrs. Chips' own years.

For approximately 35 minutes in the middle of the film Greer Garson takes over. She builds Mr. Chips into the man who will be beloved by the boys of Brookfield for the next several decades. But while Robert Donat is shown aging from 25 to 83 in Goodbye, Mr. Chips, we only ever get to see Greer Garson at one age, that at which she was Mrs. Chipping. Her final words come as friend Max (Paul Henreid) comes to offer a holiday toast. He asks Kathy to make a toast of her own: "To the future," she declares, raising her glass.

Frank S. Nugent seems surprisingly underwhelmed by Goodbye, Mr. Chips as a whole in his New York Times review, but he does rave over Garson as Kathy. He writes that, "Miss Garson's Katherine—the assertive young woman who changed the dour Mr. Chipping into the lovable Mr. Chips—is altogether believable and quite entrancing. Mr. Hilton deserves no credit for her at all," and furthermore, "When she dies, we hate to have the picture continue without her."

I wouldn't go quite that far, but I can understand the sentiment.

Greer Garson took the American public by storm with the release of Goodbye, Mr. Chips. A 1939 release, often cited as the greatest year in movie history, it's worth noting that many of the most beloved titles didn't release until later in the year: The Wizard of Oz in August; Mr. Smith Goes to Washington in October; Gone With the Wind not until mid-December in Atlanta; Of Mice and Men, even closer to New Year's 1940. So Goodbye, Mr. Chips had a leg up on that more favorably remembered crop of titles when it premiered in New York on May 15, 1939.

Somehow MGM next managed to err in placing Garson as the love interest in between Lew Ayres and one of their top stars, Robert Taylor, in her next film, Remember? Reviewers were disgusted by the waste of Garson's talent, some hoping that MGM hadn't squandered the appeal she had earned as Mrs. Chips. MGM quickly righted itself casting Garson in Pride and Prejudice (1940) with Laurence Olivier, whom had had a major impact on Garson's early career when she played with him on the London stage in the Olivier produced The Golden Arrow.

After Pride and Prejudice we run into the string of five consecutive Oscar nominations mentioned up above.

While Greer Garson is nowhere near forgotten she does seem to have fallen somewhat out of favor in modern times. Perhaps she is doomed to be considered old-fashioned because of all of the period pieces though her often imperious characters are always strong women well ahead of their times. While those characters may speak with Garson's deep, musical whisper they are always made of steel on the inside. She is never helpless.

The one film which she did win her Oscar for, Mrs. Miniver, seems dismissed as simply a World War II propaganda piece today, though I think those doing so are missing what an entertaining story of the period it is. Did it also deserve Best Picture? No, not in retrospect. Not with choices like Yankee Doodle Dandy, The Magnificent Ambersons, and even Garson's own Random Harvest also among the ten nominees that year, but Mrs. Miniver was perfectly timed to take Oscar honors. It's status as winner is only weakened by comparison with some of those other great films released that year, and not weakened by much in most cases. I do believe she earned her Best Actress award for that same part though, and that was over a group including perennials Bette Davis and Katharine Hepburn.

The tasteful romances, loose biographies and literary adaptations that Greer Garson starred in during her glory years of the early 1940s may be best beloved today by fans of the type of programming shown by Masterpiece Theatre. Current Masterpiece hit Downton Abbey even lifted the flower show scene from Mrs. Miniver, giving hope that perhaps the film itself may get swept up in the current fervor for a second life.

Perhaps her films have become considered too old-fashioned, Garson's characters too kind, for most modern audiences. Maybe her peak wasn't lengthy enough, though that doesn't detract from the quality of each of the individual films. Each of Greer Garson's best films, those many named on this page, are loaded with charm and elevated by the presence of the soft-spoken yet strong-willed Garson.

Always a titanic presence, Greer Garson lives up to the star billing every time.

Greer Garson with Robert Young and Errol Flynn in That Forsyte Woman (1949), covered on the site HERE.