As announced in the Fourth Estate clipping shown to the right Wampas, or the Western Association of Motion Picture Advertisers was formed in February 1921.

The Association was made up of press agents for the various motion picture studios and is recalled primarily for it's (mostly) annual selection of (usually) 13 Baby Stars.

As journalist Dan Thomas described the Wampas Baby Stars in 1934 when the latest and, unbeknownst at the time, last batch of Baby Stars were chosen, "One of the most highly-prized honors which a rising young screen actress can win is to be elected a Wampas Baby Star."

While you'll find many recognizable, a few even legendary, names on the Wampas rolls detailed below and listed to the right, you're also likely to encounter several names you've never seen before.

When Wampas announced the official end to the awards and their organization in October 1935 secretary Lindsley Parsons explain their origin:

"It was formed in 1920 to exploit the press agents of the picture industry as a group and to make them an integral part of the business.

"The baby star idea was to gain recognition for the organization, but we also had an altruistic motive in that we felt there were many capable youngsters in Hollywood who deserved to be brought to the producer's attention."

Parsons cited a lack of interest and the fact that some of Wampas' work had been taken over by the producer's association as reasons for their disbanding.

Wampas left behind a group of names that continue to fascinate.

Seems like a bumper crop of baby stars, no? Well, Wampas took some flak for their 1926 selection because many of the stars they chose this time around were already well established movie actresses.

Wampas went this route because they hadn't had the number of breakthroughs that had been hoped for out of their first four crops of baby stars. The 1925 grouping was especially thought of as a flop. So in 1926 more than one journalist would complain that these were not baby stars, but "real stars."

I thought the caption and text surrounding this Dolores Del Rio clip summed up this feeling best:

Seems a bit sarcastic, doesn't it?

The clipping to the right suggests that next year perhaps Wampas will select "Mae Murray or Louise Dresser" as Baby Stars. So insulted were they by the 1926 selections that they prematurely announced, "the end of a very original and charming idea."

Prior to the Wampas announcement Dan Thomas had speculated that Carole Lombard, Marion Byron, Kathryn Crawford, Lillian Roth, Mary Doran and Dixie Lee were can't miss Baby Stars for 1930. In the end though ...

Baby Star Joan Blondell does not appear in this photo, though she is in the video below.

The stars are introduced by "the most beloved mother of all time," Madame Ernestine Schumann-Heink.

June Clyde is not pictured above.

This video features Willy Pogany composing a portrait of the "Stars of Tomorrow" as Johnny Mack Brown introduces them:

This last group of Baby Stars also appeared in Kiss and Make-Up (1934) starring Cary Grant. The Baby Stars are little more than glorified extras in the humorous sex comedy from Paramount.

It is available on DVD as part of the Cary Grant: Screen Legend Collection 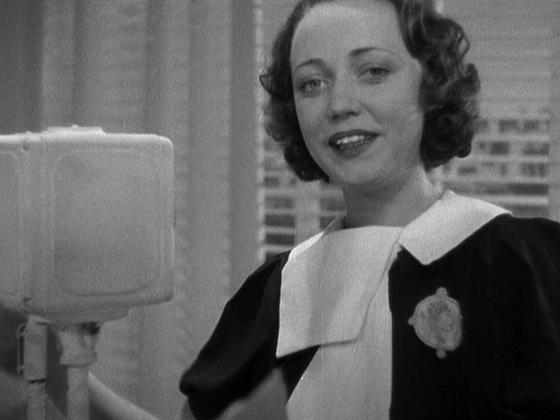 In 1934 Wampas also awarded a Silver Trophy to past winner, Joan Blondell. The clipping to the right below shows Joan with her trophy.

Blondell was awarded the trophy for greatest accomplishments over the past year by past Wampas Baby Stars. It was said that Ginger Rogers finished second with third a toss-up between Constance Cummings, Gloria Stuart and Frances Dee.

For 1934 Wampas decided that none of its Baby Stars were to be under contract to any studio in order to really give an opportunity to the latest batch of 13 (basically the opposite extreme to 1926. This ticked off Paramount who struck back by naming their own six "protegees" for 1934: Evelyn Venable, Frances Drake, Dorothy Dell, Helen Mack, Elizabeth Young and Ida Lupino.

Oddly, one of those two films featuring the 1934 Wampas Baby Stars, Kiss and Make-Up, was a Paramount production. Ironically it featured Helen Mack billed above the Baby Stars. Dan Thomas had written about Paramount's crop of stars in April 1934 and Kiss and Make-Up was a July release, so either a deal was struck or the falling out was all another bit of Wampas publicity.

These were the last batch of Baby Stars though there were similar promotional methods used by individual studios, à la Paramount, throughout the 1930s. Wampas was back in the news in 1955 when a group led by former Baby Star Ginger Rogers selected 15 young women as Wampas Baby Stars of 1956.