TCM’s Summer Under the Stars launches with 24 hours of wall-to-wall Humphrey Bogart beginning at 6 am EST, August 1. Barring the absence of Casablanca (1942) I get the idea that TCM’s selections for Bogart day would have met with approval from the screen icon himself.

Of the twelve films being shown the earliest release of the bunch is Raoul Walsh’s High Sierra (1941) featuring Bogart in the Hollywood breakout that finally stuck for the veteran actor. It plays at 7:00 am EST and is appropriately followed by the film that would cement Bogart’s stardom, John Huston’s The Maltese Falcon (1941) at 9:00 am.

Bogie’s previous movie breakthrough had come when he reprised his own Duke Mantee from the stage, at Leslie Howard’s insistence, in The Petrified Forest for Warner Brothers in 1936. But despite all the electrifying possibilities that the Mantee role offered the actor it only cemented his profession as movie actor and brought some financial stability. The long line of “B” movie leads and Mantee-light supporting roles in better movies didn’t immediately boost him to top flight status. 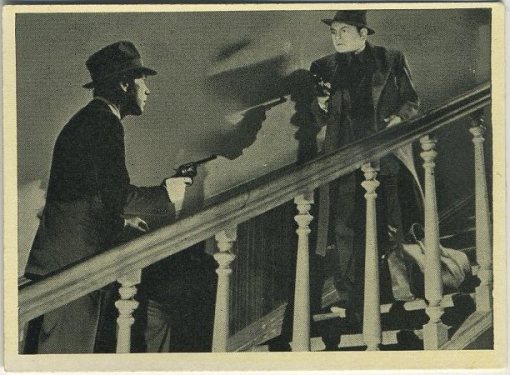 Humphrey Bogart and Edward G. Robinson shoot it out in BULLETS OR BALLOTS (1936) on this 1940 Max Cinema Cavalcade tobacco card from A & M Wix.

Still, that portion of Bogart’s career certainly left him a lot better off than he had been after his first run of movies in the early 1930s!

But Bogart’s path to stardom with Warner Brothers after The Petrified Forest was initially blocked by more established movie stars such as Paul Muni, Edward G. Robinson and George Raft. As the ‘30s fell away so too did Muni, who was pushed out, and Robinson, who was deemed past his prime. Finally, George Raft’s infamously poor career decisions paved the way to Mad Dog Earle and more for Humphrey Bogart.

Bogart had already been washed up before his smash Broadway performance in The Petrified Forest. Biographers A.M. Sperber and Eric Lax wrote that the 33-year-old actor was living with second wife Mary Philips in a “shabby apartment” in New York in 1933. There they shared grocery bills with two other couples and Bogie, waiting for something to break on Depression dormant Broadway, grew his bar tabs (44).

Hollywood hadn’t treated him well at all during his first grab at wider fame and glory. He reached the movies as many other actors of his time did. Bogart had spent the 1920s on Broadway eventually coming to prominence in Cradle Snatchers, a mid-20s hit, and Saturday’s Children a little later in 1927. When talking pictures came about he was yet another actor summoned to the movies because he had proved he could talk on stage.

Ahead of Bogart day on TCM I went digging into the online newspaper databases looking for interesting early pieces about the then floundering actor. Some of the images and ads that I spotted illustrate this post, but the most interesting text I could find comes courtesy of a November 1930 Consolidated Press Association piece.

Jessie Henderson gets the byline on this early interview with Bogart that really presents a rather vacuous young man to readers of his time, but seems more of a mischievous wink at us who read today.

While many of these old-time interviews range somewhere between studio press release and creative writing time for journalists, I’m always more inclined to buy into these early, pre-fame pieces. After all, with just two supporting roles under his belt what ambitious young movie actor wouldn’t love to get some space in the press? Still, even if the quotes that follow are real, knowing Bogie as we know of him now, it really seems like he’s playing with Henderson.

You’ll get an extra kick out of this conversation if you read the quotes with Bogart’s voice in mind.

“But where are the wild Hollywood parties?” complained Humphrey Bogart … “I’ve hunted the darn town over from the hills to the boulevard, and not a wild party have I seen, heard, or attended yet. Hollywood is calm as a summer brook.”

The reporter suggests Bogart must be going around with the wrong people.

“I’ve been going round with everyone,” Mr. Bogart declared … “All night I’ve listened and heard nothing wilder than a fire engine. Even that was a false alarm. Great scott, you aren’t supposed to have to hunt for wild parties! From what I was told in New York, wild Hollywood parties simply spring out at you from behind every palm tree. Well, it isn’t true. It’s the bunk.”

It’s suggested that Bogart may not know a wild party if he saw one.

“Hah! I’ve been in the navy. Along the waterfront in Marseilles—but that’s another story. Wild parties in Hollywood simply ain’t. This town has been slandered.”

Then we get to what is perhaps the point of this piece, published as I read it in Middle America’s Zanesville Times Signal. Hard working young actors and a moral Hollywood.

“My own opinion, based on earnest research,” Bogart said, “is that wild parties went out with the silent movies.

“Actors have to work too hard today to make whoopee tonight. You can’t raise the dickens till 4 a.m. and speak your lines correctly at nine the next morning. The exigencies of the English language have just about abolished whoopee in Hollywood. And a good thing, too. It’s one of the results, little recognized, of the talkies. They’ve done what reformers couldn’t.”

I really just want to believe that the sentence, “The exigencies of the English language have just about abolished whoopee in Hollywood,” is all Bogart and not at all reporter Henderson!

Bogie didn't even make the headlines for his first wedding. From the Bakersfield Californian, May 20, 1926, page 7.

Enjoy Humphrey Bogart on TCM today and be sure to check out what other film bloggers are talking about at the Summer Under the Stars Blogathon at Sittin' On a Backyard Fence and ScribeHard on Film. 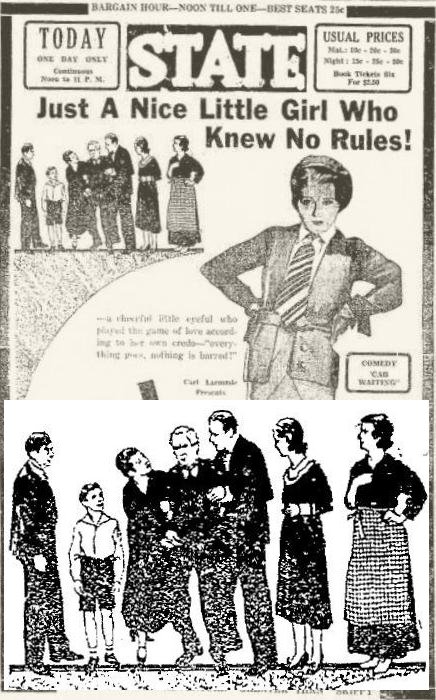 I was forced to cover up the title of the movie being advertised, THE BAD SISTER, in order to enlarge and overlay the little cartoon at the top left of the ad. It shows Bogart towards the middle helping to keep Charles Winninger on his feet. Co-star Bette Davis is right next to Bogart. The large full length shot to the right of the illustrated figures is BAD SISTER star Sidney Fox. Found in the Daily News Standard, July 8, 1931, page 2.