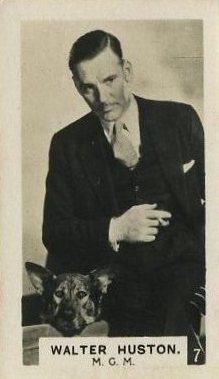 I know, why bother at all, right? I mean it’s April 6, why not just do the May preview? Because it’s Walter Huston’s birthday today and TCM is playing his movies throughout Monday morning and afternoon, that’s why!

That said, this is going to be a short version of the preview. I really mean it this month. I’ve got a lot of site news to talk about in the section after I give you my picks. So here it comes, my TCM recommendations for what remains of April 2014:

Holmes and Page play a loving couple with a small baby. Huston is a corrupt judge being investigated by Lewis Stone. Huston’s paranoia leads him to torment the young couple. He sets up Page and has her arrested on morals charges; he takes their baby away from Holmes, now a single father, who can’t look after him properly. Huston’s character really has no redeeming qualities, so it’s a lot of fun to see him finally squirm. Strong ending, even if the District Attorney nearly sends it off the rails (just keep the box open, would you!).

I’ve written about Night Court in the past, HERE, and I feel as though I’m in good company because my friend Karen of Shadows and Satin also chose it as her pre-Code of the month. It was a difficult choice for me—I’ve bolded titles of those that came closest to claiming this top spot (including a couple of more with Walter Huston!).

Here, in brief, are my remaining picks for April:

Here's a post I'd previously written about April Star of the Month Anthony Quinn.

Star of the Month for May will be Sterling Hayden.

Karen, who I mentioned up above, and Danny of Pre-Code.com hosted a four-day Pre-Code Blogathon last week. I wrote two new pieces for the Blogathon, a review of Blood Money (1933) on Immortal Ephemera and a biography of Warren William at Warren William.com. 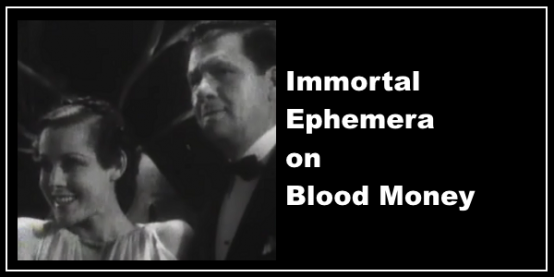 Check out posts from each day of the Pre-Code Blogathon here: Day One | Day Two | Day Three | Day Four

Speaking of Danny, I had the pleasure of meeting him for the first time this past week in Manhattan. Over the past couple of weeks Danny has provided some great coverage of his trip to the TCM Film Fest on Pre-Code.com, and the Festival was just one of several classic film subjects we discussed when he made New York one of his post-TCMFF vacation stops. Will McKinley of Cinematically Insane also met up with us for a little while. Luckily, Danny had a camera on hand and snapped this shot of the three of us: 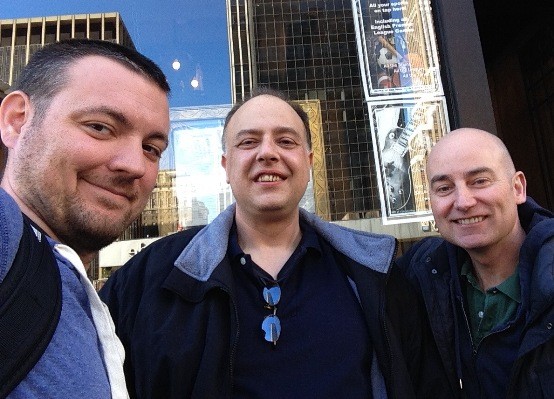 Left to right: Danny of Pre-Code.com, Cliff of Immortal Ephemera, and Will of Cinematically Insane.

I’ve never made the Festival, so it was great to catch up with both of the guys in person! 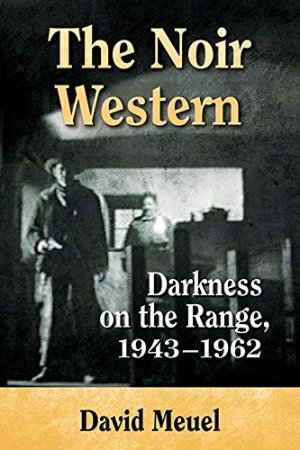 Author and film historian David Meuel became a friend of the site last year after I reviewed his first book, Women in the Films of John Ford. This time around he chooses another interesting subject, The Noir Western: Darkness on the Range, 1943-1962, and tackles it with the same thorough and incisive style and methods he used in the previous John Ford book. David was kind enough to send along a complimentary copy of The Noir Western, even after I told him it was slightly outside the current focus of the site to review, so I wanted to thank him again for the gift.

I have read the introduction, “The Dark Cowboy Rides into Town,” and the first chapter covering three William Wellman westerns, The Ox-Bow Incident, Yellow Sky, and Track of the Cat, and found the ideas and entries every bit as fascinating as I did the work in his previous book. I won’t give away the rest of the titles David discusses in The Noir Western, but the films are grouped by director, so I will list those for you: Wellman, Raoul Walsh, Andre de Toth, Robert Wise, Sam Fuller, Henry King, Anthony Mann, Allan Dwan, Delmer Daves, Budd Boetticher, and John Ford.

Based on the bit I’ve read so far and my past experience with David’s John Ford book, I don’t hesitate in recommending his latest to all fans of these dark westerns. You can pick up a copy on Amazon HERE

, through my affiliate link, with my thanks!

First off, and this ties into the other items mentioned below, I’ve upgraded the Search on the site. I’m still tinkering with some of the settings on the “Pro” version of the previous plugin I’d been using, Relevanssi, but I like what I see so far, and expect I’ll be able to get my posts and other items to index just as I imagine they should be. Adding the pro version of the plugin will add even greater relevancy to any subject you search on the site.

I’m also adding several new categories of posts to the site and there will now be multiple new pieces of content—daily. If you’re an email subscriber, don’t worry: I’m moving subscriptions over to Mad Mimi’s service and segmenting the list.

What this means is if you just prefer to receive what you’ve been receiving: Previews, such as this, other standard News & Notes, the regular Reviews, and my Classic Movie Biographies, I’ll have a special “Standard” list for you to subscribe to. If you want to see all of the new stuff, every day, you’ll want to sign up for the “Classic Movie Daily” version of the list.

You can select your preferred subscription through THIS link (Don't forget to tick one of the selection boxes to choose your subscription). It will be the default sign-up form on the site by Tuesday morning. Later this week I’ll begin discontinuing the current email subscription service (Google’s Feedburner) and will manually move any remaining names to the new “standard” list at Mad Mimi. So even if you miss this email, you won’t experience any changes beyond a pretty new format to each mailing.

So what are “Classic Movie Daily” subscribers going to see?

All of the same types of posts you see now, plus Photos — single images that don’t fit in the gallery section. Press and Promotional photos, fan photos, even postcards. A few a day, similar to what Facebook fans and Tumblr followers currently see, but only the best images—and not all of them will post to Facebook or Tumblr (Likewise, images of cards that post there can already be viewed on the main site in the Galleries). Some photos will be treated separately as Birthday Alerts that I hope to use to build into an annual calendar over time.

I’ll also be posting some shorter, more informal content, which was a goal of mine this year. I’m spending a lot of time researching daily, whether it be for reviews on the site or material for my eBooks, and come across a lot of interesting facts that I scribble down for myself. I’m going to begin sharing some of those on the site.

Plus some other new kinds of posts, a few of which are also being sampled below.

Subscribe to "Standard" to keep your subscription as-is. You’ll continue to receive the 1-2 posts per week that I’ve been averaging recently. They’ll arrive in your inbox in a pretty new template after today.

Do nothing: I'll get you set up on the "Standard" feed by the next mailing. I'll also include a reminder to upgrade to "Classic Movie Daily" if you want more free stuff, every day.

Subscribe to "Classic Movie Daily" to receive (one) daily digest containing all of the standard-type posts, plus all of the additional new content I’m adding to the site. Also in a pretty new template.

Going forward the posts like those that follow will not be included in the “standard” email (though standard subscribers would still receive this preview/news type post).