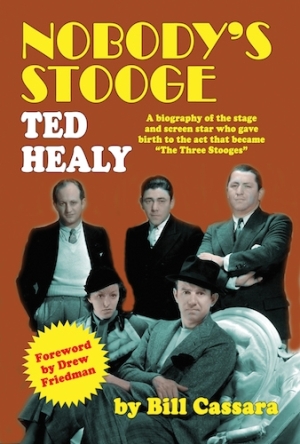 Nothing against The Three Stooges—I still lock them in any time I spot them while channel surfing—but they’re not the reason I requested a review copy of Nobody’s Stooge: Ted Healy by Bill Cassara. I was interested in this book for three reasons and they’re all about Healy:

I couldn't resist requesting a review copy of Nobody’s Stooge after reading the press release sent out by the book’s publisher, BearManor Media:

Ted Healy's sudden death at age forty-one just days after the birth of his son has long been surrounded in mystery and scandal. Author Bill Cassara, a retired law enforcement professional, digs deep into archives and never before seen sources to uncover the riveting, tragic, and at times hilarious truth about Ted Healy, the unjustly forgotten, innovative funnyman.

Plus, high praise from a respected source, quoted in the same release:

Bill Cassara, a retired police Internal Affairs sergeant, turns his attention to Healy and comes up with ‘the goods.’ He even devotes an entire chapter to the rumors and lore surrounding his mysterious death in 1937. Comedy buffs will welcome this thorough biography, filled with rare photos and newspaper clippings. –Leonard Maltin (Movie Crazy-Dec. 2014).

Above: Healy billed with his Stooges at the start of Meet the Baron (1933).

Cassara digs deep into Healy’s final days in the chapters “The Curious Death of Mr. Healy” (27 pages) and “The Great Ted Healy Death Mystery” (11 pages). While the author’s law enforcement background allows for the most qualified possible explanation of the available evidence, the book does not offer any earth-shattering new evidence that either makes more concrete the official cause of death or dispels more imaginative theories. As the author himself points out, "Any official police reports or files of this case have long been purged" (210).

Cassara provides a very complete accounting of mostly the same old sources: day-to-day newspaper reporting of the period and theories about Healy’s death that other authors have published in the past. Some of these were new to me (issues of Three Stooges Journal) or, I presume, previously inaccessible (Peter Lind Hayes unpublished memoirs), but I don't expect any single piece of evidence will be strong enough to ever completely stop the conspiracy theorists. Where Cassara stands out in compiling this information is in interpreting it through an eye trained for forensics and following up with other authors and (living) parties who have made past accusations against one suspect or another. 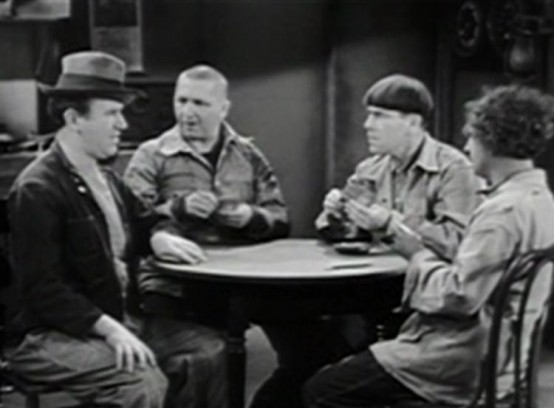 Above: Ted Healy and The Three Stooges in Meet the Baron.

Cassara concludes that Ted Healy died of natural causes, but I’m not sure he convinced me of the fact any more than I already was. This isn’t the author’s fault, it is the nature of conspiracy theories. I feel certain that a reader who is already convinced that Healy was murdered, by any of a handful of the usual suspects, could refute most of Cassara’s conclusions—I agreed with most of them, yet I didn’t come away from the book feeling as though I was armed with any definitive new evidence clearing anybody (Of course, there isn't any evidence clearly condemning anybody either, it's all circumstantial, always has been). Again, I don’t feel this is truly a negative, but it sure would have been great to completely close the book on this topic.

As to the rest of Nobody’s Stooge, first the physical aspects. From the BearManor release: “390 pages. Includes a richly detailed biography, a Filmography, Stageography, Bibliography, Index, and photos and illustrations.”

To elaborate, it’s a pretty standard sized trade paperback that's holding together like new even after my marking up and dog-earing my copy—I put my library through a workout and some books simply fall apart. This one didn't.

The images were great with plenty of goodies included for fans of the Stooges as well. There’s one picture beginning each chapter and two dedicated sections of photos (31 pages comprise those two sections).

The actual text, beginning with the Introduction on page one and stopping when Healy’s story ends (before the appendices and other back matter), runs 255 pages, which includes those two photo sections.

The Healy Stageography is impressive, a valuable compilation for the Healy completist, and runs 6 pages. The Healy Filmography runs over 60 pages and while each title does include a brief summary (apparently written by Brent Seguine), easily more than half of those pages are given over to cast listings that we can find with a few IMDb clicks today. Still, as this is likely to be the definitive volume representing Ted Healy for the foreseeable future, if not all time, it is worth having all of this information between the covers. 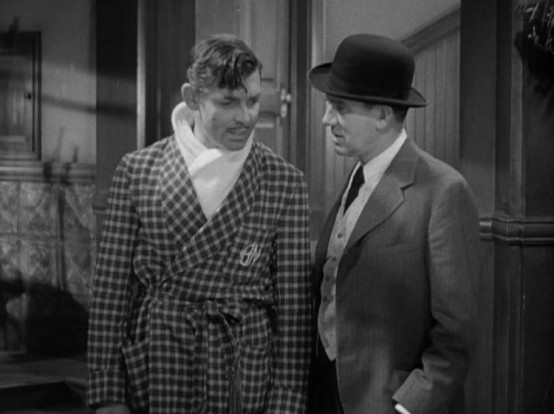 Above: Clark Gable and Ted Healy in San Francisco (1936)

Cassara’s text reproduces many old newspaper and magazine articles. But if Nobody's Stooge relies too much on reproducing old clippings, it cannot be faulted for lack of documentation. Footnotes decorate the bottom of several pages throughout the volume and the bibliography is a lengthy roll call of all existing media.

In his introduction, Cassara explains:

Since no one is still alive to offer firsthand accounts of Healy’s career, these are the only documents to draw from. What better way to sleuth the maligned, misunderstood and mysterious Mr. Healy? It is for this reason the author chose to include sometimes entire reviews within this book (4).

Again, that’s okay, because to reiterate Cassara’s above statement, Healy’s is a biography largely forgotten by the passage of time. Most of the remaining scraps are various promotional pieces that at least tell us where and when the subject did something, but otherwise may be the invention of publicity. And Cassara does interject every so often to suggest which notices should be taken with a grain of salt. Healy as a subject is an unenviable task at this late date and I feel certain that Cassara provided every bit of due diligence in tracking down as much of the story that remained to be told. I would have preferred the author to relate more of this information through a more personal narrative, though Cassara’s passion and interest in his subject does shine through when he takes that route.

Above: Healy gets into it with Nat Pendleton in Death on the Diamond (1934).

Another problem with the liberal citations comes in the formatting, which can sometimes make it confusing to tell whether we are still reading a newspaper clip or if we have switched over to Cassara’s own voice. There were three or four occasions that I had to backtrack and read a section over to decipher one from the other. That one isn’t the author’s fault though.

Not having exposed myself to any of the countless existing books about The Three Stooges, I cannot answer to Nobody’s Stooge based upon Stooge-content. I like The Three Stooges, so what was there I found interesting, though I’m not the reader to tell you if it was new information. But again, I didn’t want to read this book because of the Stooges. So how did it fair on the points that attracted me to the book?

The beginning of the book covering young Ted Healy, his family and show biz beginnings was the most enjoyable portion for me. Cassara overcomes the tough task of scraping together enough information about a relatively obscure subject to tell what feels like a complete story. I thought it was the strongest part of Nobody’s Stooge 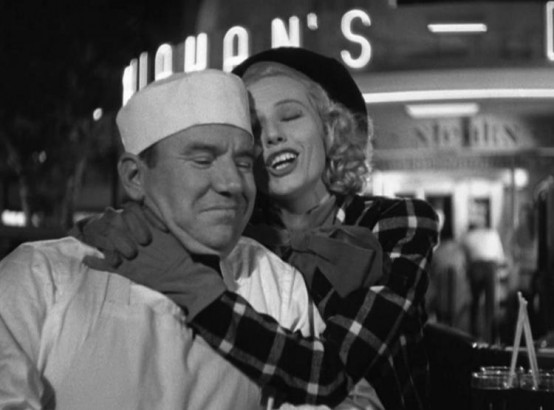 Above: Healy with the bizarre Mabel Todd in Hollywood Hotel.

I could have used more about Healy on film during the 1930s. Not every movie is covered (though they are in the Filmography) and the entries are brief for those that are. Just a few paragraphs each, up to about a page at most. The author definitely thought a lot more of Healy’s movie career than I ever have, but he didn’t convince me that it was worth a reappraisal. Personally, I don’t believe Healy’s premature death robbed Hollywood of any great performances, though I believe he could have made a major impact on early television, as suggested by Drew Friedman in the foreword.

Which brings us to my final area of interest, Healy’s death. As explained above, I thought Nobody’s Stooge presented a very well done survey of the existing landscape of fact and rumor that was enhanced by Cassera’s qualified opinion as an experienced law enforcement professional. I’ve purposefully steered away from discussing other names that have fallen under suspicion over the years, primarily because I feel it’s Cassara’s right to explain those to you, but for my own purposes I do like this tidy summation from Cassara: “The rumors that Wallace Beery ‘murdered’ Ted Healy can be dismissed once and for all as unsubstantiated falsehoods” (225).

If you’ve never delved into the period articles about Ted Healy’s death, then these two chapters present a wealth of information. To be honest, I preferred Larry Harnisch’s stronger voice in tying it all together in his Daily Mirror series, but Cassara does a better job of incorporating existing Stooge lore, plus he follows up with other expert authors who’ve covered Healy’s death in the past.

My final word on Nobody’s Stooge by Bill Cassara: recommended. The content outweighs any other issues I may have had and the book succeeded in completely filling my knowledge gap about Healy’s early years, while enhancing my understanding of Healy’s death. That makes it a winner on two of the three points that made me request a copy in the first place.

Many thanks to BearManor Books for providing a review copy of Nobody’s Stooge: Ted Healy by Bill Cassara. You can pick up a copy of the book direct from BearManor’s site HERE.

Above: Healy gives Moe a smack in Meet the Baron.