You are here: Home / Movie Star Biographies / Barbara Stanwyck, Biographical Beginnings to Baby Face and Beyond

This originally posted when Barbara Stanwyck was Star of the Month on Turner Classic Movies in December 2012.

Ruby Catherine Stevens was born in Brooklyn, NY, July 16, 1907. Her mother died when she was four and her father abandoned the five kids pretty much right after that. Older sister Mildred was a showgirl. She took care of her younger siblings, but Ruby and the others were placed in foster care whenever Mildred went on a road tour.

"In the environment in which I grew up," Stanwyck said in 1955, "kids existed on the brink of domestic or financial disaster. We were alert, precocious and savage. I endured this world by developing a bitter hatred of it. I tried to escape by retreating to a dream world of my own" (Shearer).

Ruby dropped out of school and worked a quick succession of odd jobs before entering show business herself.

By 1922 the fifteen year old was a Ziegfeld Follies chorus girl and spent the next few years singing and dancing in revues and at nightclubs. Writer Willard Mack, a jack-of-all-trades who also acted, directed and produced, cast Ruby in her first Broadway show, The Noose, in 1926.

It was with The Noose that Ruby Stevens became Barbara Stanwyck.

The legend behind the Stanwyck name is that Mack and Stanwyck spotted a poster or playbill advertising old time actress Jane Stanwyck in Barbara Frietchie, a turn of the century play, and just combined elements of the billing to create Barbara Stanwyck. This origin story is repeated with regularity throughout Stanwyck's life and still survives as the popular explanation as to how Ruby Stevens became Barbara Stanwyck.

Problem is that after running some soft searches I can't find record of the original Stanwyck. Neither could these folks, who saved me the trouble of becoming too obsessive over this by digging a lot deeper than I did.

sticks mostly with this same story in similarly befuddled tones. Wilson offers an alternative in the possibility of Stanwyck being combined from the last names of Addison Stanton and Dorothy Southwick, two actors appearing together in Victor Herbert's 1906 Dream City, but the idea seems a stretch and is limited to a single paragraph on page 71 of her book.)

At any rate The Noose flopped, but 1927's Burlesque, which starred Stanwyck with Hal Skelly, was a big hit that made the actresses' name her own, no matter where it may have come from. During Burlesque Stanwyck met Frank Fay. They married in 1928 and Stanwyck followed her husband to Hollywood where he already had a contract.

Stanwyck soon had her first Hollywood hit in Frank Capra's Ladies of Leisure, which appropriately kicks off TCM's December 2012 Star of the Month slate of movies. Including that title TCM spends December showing you what Barbara Stanwyck was doing those next thirty-plus years:

If for any reason you are looking for TCM's December 2012 Stanwyck schedule, just click this text and the section will be expanded to reveal it. 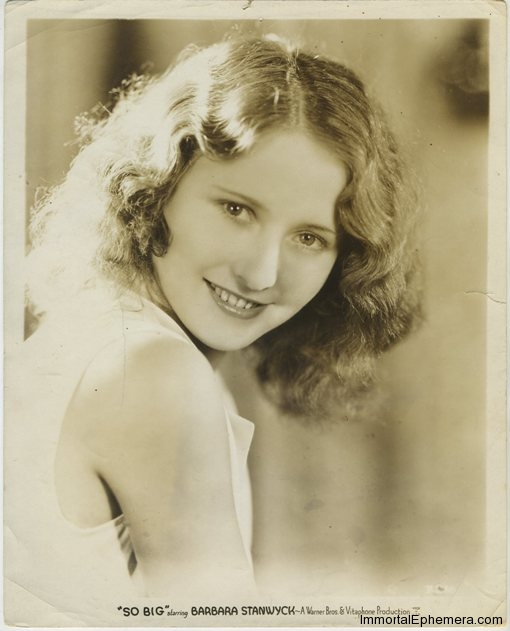 The marriage to Fay was not a good one and ended in divorce in 1935. They had adopted a son, Dion, in 1932, and Stanwyck was given custody, but the relationship with her only child eventually became estranged. Stanwyck later married MGM leading man and former co-star Robert Taylor in 1939. After divorcing Taylor in 1951 Stanwyck would not remarry.

Stanwyck received four Academy Award nominations during her film career, but her only Oscar was an honorary award received in 1982. Her nominations for Best Actress all fell between 1938-49 and were received for her work in Stella Dallas, Ball of Fire, Double Indemnity and Sorry, Wrong Number.

Emmys came a lot easier than Oscars for Stanwyck though. She'd win three during a television career that kept her especially busy in the 1960s.

The first of those awards came for The Barbara Stanwyck Show in 1961. As The Big Valley joined the TV Western craze in the mid-1960s Stanwyck found herself responding to criticism anticipating that she'd be nothing more than a "Ma" Cartwright:

"Fine, let them compare us to 'Bonanza' ... I'll tell you this, though. We get mad at each other in our show and make mistakes. Lorne Greene is the Loretta Young of the West. That's not for me" (Humphrey).

She picked up her third Emmy years later for The Thorn Birds miniseries, a true television event at the time it originally aired. Stanwyck's final television work came in Season 1 of The Colbys, a 1985 series spun off of Dynasty, in which she had appeared in a few episodes earlier that same year.

The December 2012 TCM Star of the Month schedule is absolutely packed. 55 Barbara Stanwyck movies. A few I need to see, but no more than one or two that I cringed over (The Two Mrs. Carrolls and Lady of Burlesque if you must know).

It took me about three or four minutes to type the first day of TCM's big Barbara Stanwyck schedule. Those movies that air beginning this Wednesday at 8 pm EST. When I got to the end of that first 24 hour Stanwyck movie marathon I found myself thinking, There's more?

No, my fingers weren't tired, but after listing Stella Dallas, The Miracle Woman, Baby Face, Golden Boy, Meet John Doe and Executive Suite, to rattle off less than half the December 5-6 schedule, I had a hard time believing TCM hadn't spent all of Stanwyck's best titles on opening night.

But there was still Remember the Night, The Lady Eve, Ball of Fire, Double Indemnity, Sorry, Wrong Number, Forty Guns and a bunch of Westerns I haven't seen, Night Nurse and a bunch of pre-Codes that I've watched over and over.

I can't really speak to the Westerns. For me they make up the most interesting part of TCM's December schedule as personally undiscovered territory. But I expect to find more of the Barbara Stanwyck I know from all of those other films tucked inside those Westerns.

I know Baby Face gets a lot of play, but I think it's Stanwyck's truest performance and consider it her key role. I never see as much of the Stella Dallas character or Double Indemnity's Phyllis Dietrichson in Stanwyck outside of those movies, but Lily Powers of Baby Face emerges in some degree from most of Stanwyck's portrayals as I watch them. The other performances may require more skilled acting, but Stanwyck seems to reveal herself most as Lily Powers. Lily even seems to break through in her performances in Stella Dallas and Double Indemnity where, respectively, Lily's social aspirations and manipulative powers are on display in ways that trigger memories of Baby Face.

Years faded away when I read that 1955 Stanwyck quote excerpted at the top of this page: "We were alert, precocious and savage," she had said. How could I not think Lily Powers, one of the most savage screen characters of them all? Pretty alert and precocious too!