Everything Immortal for September 27 ...

I wasn't very impressed when I compiled the list of September 27 birthdays. I figured I'd just take a quick look for something about Wally Van (born 1880) and Olive Tell (born 1894), two silent era names that I knew nothing about. Very glad I began with Wally Van. Olive Tell, well, wait 'til next year.

I don't expect you to have heard of Wally Van. I'm most familiar with him through that playing card image above. Checking in on the IMDb for Wally Van's most popular films by viewer vote calls up an empty page. He is credited with 76 films on the page, yet not a one received a vote? I'm left to believe that the entirety of Mr. Van's work is either lost or completely forgotten.

So just who exactly are we celebrating then? Wally Van was a screen comedian for Vitagraph, especially active on film between the years 1913-1916 when he starred as Cutey in a series of shorts with some slightly better remembered co-stars.

Using the IMDb's "credited with" feature (now long hidden to the best of my knowledge, but accessible from this Immortal Ephemera post) reveals that Van starred with Lillian "Dimples" Walker in 26 titles; Flora Finch and Hughie Mack 21 times apiece; and even shared the screen 14 times with John Bunny, a number which may have been higher had Bunny not died in April 1915.

Wally Van also directed most of his "Cutey" features at Vitagraph and the co-stars named above were oftentimes featured together with Van.

So who, or what, was "Cutey"? Since I've never seen Wally Van in action I'll leave it to the period reporters. From 1915:

"It might be said editorially that Wally Van is a wholesome comedian of a different type from that which is at present so very popular. Wally is boylike and his pranks seem to savor of rich youthful reminiscences."

Charles Wallace Van Nostrand was born September 27, 1880 in New Hyde Park, NY. It is said that his college mates shortened his name to Wally Van, and while that may be true he continued to show up in the papers for awhile as either Wally or Wallace Van Nostrand.

In their August 1915 edition Motion Picture Magazine printed a brief biography of Wally Van in which they report that "strange to say, Wally Van ... is an electrical and mechanical engineer by profession, his most important work being with the Brooklyn Rapid Transit Company and in the subway tunnels of the East River."

As if that weren't fascinating enough Van, still called Van Nostrand by the papers, became an expert in marine engines during the speed boat craze of the early 1910's. He piloted the famed Reliance boats owned by Commodore J. Stuart Blackton, who happened to be the very same film pioneer who formed Vitagraph Studios at the turn of the century. That's the studio where Wally Van, Lillian Walker and the rest of the gang made their "Cutey" and "Dimples" features.

Tucked in the sports section of a 1914 edition of the Brooklyn Daily Eagle, underneath the baseball scores, is notice that C. Wallace Van Nostrand, aka Wally Van, as chairman of the entertainment committee of the Atlantic Yacht Club, entertained some yachting friends at the Vitagraph Theater in Manhattan.

I'll say he entertained them! He ran a couple of his own films! The tone of this clipping barely pays any attention to the fact that the entertainment chairman is a film star preferring to concentrate upon the general good time had by the yachtsmen:

"In addition to playing in a 'silent comedy' entitled THE NEW STENOGRAPHER, written by Commodore J. Stuart Blackton, Mr. Van Nostrand is the hero of the moving picture play entitled LOVE, LUCK AND GASOLINE, which is being shown at the theater.

"The yachtsmen were particularly pleased with the moving picture play as it included some wonderfully good pictures of racing yachts and motorboats ..." 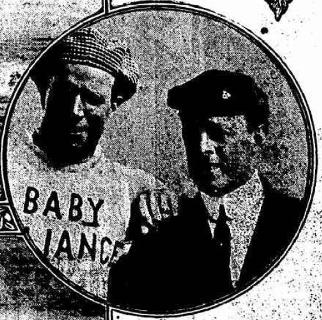 WALLACE VAN NOSTRAND, who will handle BABY RELIANCE IV, in the big motor boat races, and on the left a member of the crew in "service uniform." As appeared in The Sun, August 25, 1912, page 9.

While the brief biography from Motion Picture Magazine makes no mention of Blackton they claim that "Wally took an interest in working out engineering problems for the Vitagraph studio, and one balmy day, in a spirit of fun, posed as an extra."

Prior to entering films Van did perform a little vaudeville at local Brooklyn clubs and was said to have been "an inimitable comedian, with a fine ear for music, a good baritone voice and a fighting mixture of German and Scottish dialect" (Motion Picture).

Blackton left Vitagraph in 1917 while Wally Van left at the end of the prior year. Van's interests appeared more bent towards directing and producing and using his last Vitagraph film The Scarlet Runner (1916) as proof of his talents he made quite the statement in this 1917 advertisement appearing in Variety:

"Have just severed my connection with the Vitagraph Co. after six years' service as author, comedian, and director. My future activities will be announced soon."

Van disappeared from the screen for several years working behind the scenes as director-general of the independent Hallmark Pictures Corp.

The papers trumpeted his return in 1923, especially giving a push to The Drivin' Fool, but Van was soon off of the screen for once and for all.

The only hint I could find about his later years come courtesy of this photo included on a 1938 advertorial page in the New York Post:

That's Billy Rose standing with Wally Van seated at the left. The caption intimates that Wally Van screened talent for a company called Screen Test Pre-Views, Ltd. It's the last bit of press I could find for Wally Van, either in the National papers or the New York locals.

Also born on September 27 were the aforementioned Olive Tell in 1894; Bernard Miles in 1907; and in 1920 both Jayne Meadows and William Conrad.

A strong double feature this morning when TCM airs Alfred Hitchcock's Suspicion (1941) with Cary Grant and Joan Fontaine at 8 am EST, followed by Edward Dmytryk's film noir classic Murder, My Sweet (1944) with Dick Powell at 8:45 am.

It's also TCM's final night celebrating the work of Mack Sennett. The shorts kick off at 8 pm EST and run deep into the night. I'd bet money on Will McKinley having a detailed preview up at some point today.

Round one of the early 30s MGM Promotional Photos was a success last night with an upset provided when the shot of Mary Carlisle and Jean Parker sold for $56.50 plus shipping (pictured below). Round 2 of 3 winds down Friday so we'll save the preview until tomorrow. Once they all end I'll update the Preview Gallery Page into a Prices Realized Gallery Page where I'll note all of the final prices paid for photos from this collection.

For those who prefer to Buy it Now over the sometimes frenzied auction pace I am currently running a 10% off sale on over 1,700 items in my eBay Store. All movie stills and promotional photos, premiums and supplements are included as are several other items through October 1. Trading and tobacco cards are not on sale at this time, but shipping can always be combined between any of the items listed in my eBay Store - Sales items HERE

Not a film-related site, but the page I'm going to mention is.

It was while doing research tonight that I stumbled upon a post with photos of J. Stuart Blackton's estate in Oyster Bay, New York. You'll recall Blackton from earlier as the film pioneer who founded Vitagraph and hired Wally Van to race speedboats and star in comedy shorts for him!

Blackton's mansion is just a single page from the content packed and still active Mansions of the Gilded Age blog run by a Gary Lawrence, AIA and co-author of Houses of the Hamptons, 1880-1930

Mansions of the Gilded Age proclaims itself as "devoted to the histories and current state of the great mansions of America's Gilded Age," and is the latest blog that I have personally subscribed to!

Hey hey, the weekend is in site! Have a Happy Thursday --
Cliff