Jean Harlow 1930s MGM Promotional Photo. 1 of 4 from this collection.

I recently acquired a collection of 55-60 vintage 8x10 Promotional Photos in August 2012. These vintage photos are largely from the early 1930s--nice exceptions include mid-1920s photos of Greta Garbo and Norma Shearer--and mostly from MGM.

These are all photos of actresses, though Johnny Weissmuller does pop up accompanying each Lupe Velez and Maureen O'Sullivan; Robert Young accompanies Anita Page; and John Gilbert is pictured alongside Greta Garbo on one of those '20s shots.

Most of these vintage photos have descriptive text captions in typeface directly on back of the photo (no paper tags). These captions are mostly in English throughout the grouping though those few mid-20s photos I mentioned do have Spanish language captions on back.

These photos were purchased from a gentleman whose grandfather worked for a movie magazine in Cuba during the 1920s and '30s. (Further explaining the few Spanish captions). This gentleman's father came in possession of the photos some 50 years ago and he, himself, had them handed down to him about 10 years ago.

This is the first time these photos have been offered for sale to collectors.

These photos will each be individually listed have sold at auction on eBay between September 19-23, 2012 with the 7-day auctions ending September 26-30, 2012. Each auction opened with a $9.99 minimum bid. No reserves.

Prices Realized are now included for each of the sold photos inside the Gallery.

All photos from this sale are pictured in the Gallery following below. Both sides, front and back, are shown for each.

Condition is generally nice when viewed from the front--a few chipped corners which will be described in full in the auction listings.

On back each photo has two spots of glue/paper residue from previous mounting. The good news is that I didn't see much in the way of paper loss on the reverse side, just additional paper residue from being removed from mounting in a book or album of some type.

Click any photo to enlarge--from there you can scroll through the entire collection enlarged at one time. Enjoy!

Note: I'm running behind on a few things—including email … END_OF_DOCUMENT_TOKEN_TO_BE_REPLACED 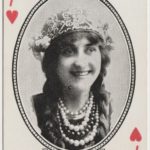 Thanks to those who wrote to point out Barbara Stanwyck's … END_OF_DOCUMENT_TOKEN_TO_BE_REPLACED