You are here: Home / News - Notes / George Raft Dances in the Immortal Archives for September 26

Everything Immortal for September 26 ...

For starters, George Raft in 1901. More below, but first we pick up from yesterday with a bit more about George Raft, especially his early biography following this later image: 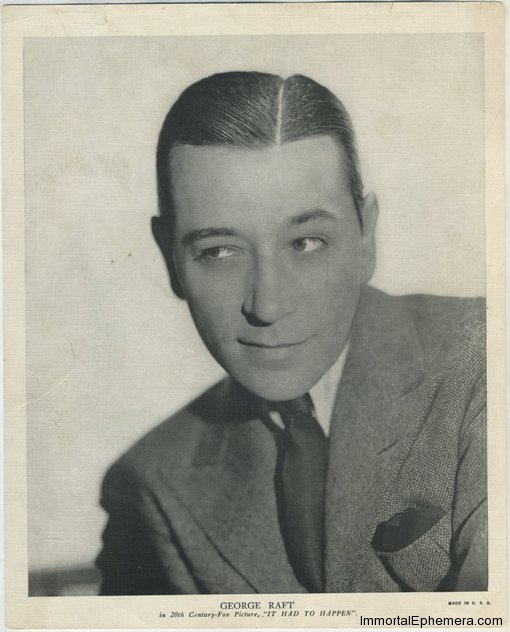 Later being just 1936. But we're not going to go that far. We're just going to get Raft into Scarface in the style of many of my recent Summer Under the Stars postings. Then we'll move on to a brief biography of Miss Fay Holden before wrapping up with some odds and ends for September 26.

"Just in case you don't connect the name with the actor, since George still is comparatively new as a screen hit, he is the young man in Scarface who always is toying with a nickel." 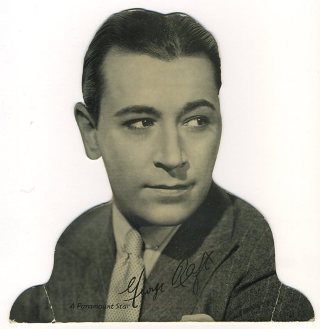 So wrote Dan Thomas in the Summer of 1932 managing to describe the way I still first think of George Raft today, despite benefit of seeing so many of his films which followed his Scarface break-out.

When Raft was 15 he spent two years as a club fighter in New York, supposedly getting knocked out 7 times in 25 bouts. The athletic young man next tried out baseball as a career, signing up with the Eastern League team out of Springfield, MA. He couldn't hit. He'd experience his first success as a dancer.

He danced in contests as a teen-ager and then made some money working tea rooms and night clubs. Places called Healy's, Churchill's, Murray's and Rector's, that last one where he worked the same floor at the same time as Rudolph Valentino. At 19 Raft was spotted by an agent after winning a dance contest and joined a vaudeville tour from there.

The Jazzology ad shown on this page was in promotion of an October 1920 performance at Poli's night club in Bridgeport, Connecticut. The accompanying text (separate from the ad itself) gave a brief overview of the act:

Jazzology, the closing act, has two very clever vaudeville artists in the cast. They are Edna Lee and George Raft. These artists, with the assistance of Guy Dunbar's Orchestra and others, presented a variety of tunes and steps which were very pleasing.

A January 1926 article titled, "Charleston: Everybody Is Trying to Do It!", spoke to Raft about the craze. He claimed to learn the dance five years earlier in New Orleans but that nobody paid it any special attention in his act until the dance became the big national rage. The anonymous author wrote that, "Very few can hope to get the magnetism and swaying grace which he puts into it."

In 1927 he went to work for Texas Guinan at her 300 Club where "the girls he know called him, affectionately, 'The Old Black Snake'" (George Raft, Popular). Soon he signed with Paramount Publix, where he performed "previews" on the stage prior to the movies rolling (think of what Cagney's troupe did in Footlight Parade).

Raft had dancing bits in three 1929 films, including his lost debut where he performed his act in Queen of the Night Clubs starring his boss, Texas Guinan.

He headed out to Hollywood and was "discovered" in 1931 by director Rowland Brown, who spotted him at the Brown Derby. Brown asked him if he wanted to be in the movies and Raft was soon at work on Quick Millions.

It was only about a year later that the public took notice of George Raft flipping that nickel in Scarface. He was a star playing leads for Paramount by the end of 1932.

I've previously covered one early George Raft title on the site and one later Raft title. See my article about 1932's Night World HERE and for Raft with a bit more seasoning 1949's Red Light HERE.

A look back at the huge 285-piece Artisti del Cinema set issued out of Italy in 1951. These are paper cards--or more accurately stickers--measuring a respectable 1-3/4" X 2-3/4 inches. What makes them special though are their absolutely blazing colors, one of the most colorful sets I've seen as the sample image of the youngest of our birthday celebrants, Barbara Britton, helps make clear below:

But really, you've got to see them all at once to appreciate how color the Artisti del Cinema cards are. Check out the entire gallery HERE.

The first round of my early 1930's MGM Promotional Still Photo auctions is ending TONIGHT beginning at about 10 pm EST. Sales ending tonight include vintage early 1930's photos of stars such as Joan Crawford, plus 3 mid-1920's (!) shots of Greta Garbo including two from The Temptress (1926) and one with John Gilbert; also Mary Carlisle, Elizabeth Allan, Virginia Bruce, Jean Parker, Anita Page with Robert Young, Muriel Evans and more!

Bidding is strong though the $9.99 opening bid is still available on several of tonight's photos.

You can bid on them all at eBay through THIS LINK.

Wishing you best of luck should you be one of my bidders tonight and best of days just for reading this far!
Cliff