I thought so, but it'd been awhile. Without a doubt Captain Blood (1935) is my favorite action/adventure film of all-time. Errol Flynn is simply amazing in the title role. He absolutely owns the camera with his every move with perhaps only Erich Wolfgang Korngold's rousing score registering on a scale approaching the young Flynn. Don't get me wrong, Olivia de Havilland shines as Arabella Bishop in what for her, like Flynn, is a breakout role, however as is so often the case when they're paired Flynn is the indisputable star of the film while de Havilland finds herself with much less to do as his love interest.

Prior to Captain Blood Flynn had only played a couple of small roles in the U.S. for Warner's; in The Case of the Curious Bride (1935), a Perry Mason film starring Warren William, and Don't Bet on Blondes (1935), another William vehicle from the same year. De Havilland would have been only a little more noticed having come to Warner's with Max Reinhardt's A Midsummer Night's Dream (1935) and then finding herself between James Cagney and Pat O'Brien in The Irish in Us (1935). And then what in retrospect seems like one of the most unlikeliest pairings of all time opposite Joe E. Brown in Alibi Ike (1935). Flynn was just 26 at the time of Captain Blood, while de Havilland was still a teenager, just 19.

Captain Blood was based on the novel Captain Blood, His Odyssey by Rafael Sabatini, published in 1922 with sequels in print to follow. Previously filmed by Vitagraph in 1924, a company sold to Warner's the following year, the silent version of Captain Blood starred J. Warren Kerrigan as Captain Peter Blood with Jean Paige as Arabella Bishop. A truncated version said to include most of the action scenes had been available on DVD at one time from Grapevine Video, but it appears to have slipped out of print. 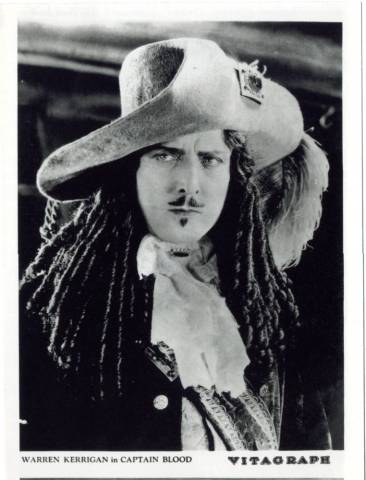 In the excellent featurette, Captain Blood: A Swashbuckler is Born, found on the Warner Brothers' DVD release of Captain Blood, it is film historian Rudy Behlmer who explains that Warner's sensed the Adventure film was back in vogue after the success of Reliance Pictures' The Count of Monte Cristo (1934), released in the U.S by United Artists, and MGM's Treasure Island (1934). Captain Blood was dusted off to be remade.

It's well-known that Monte Cristo star Robert Donat was offered the role, as was Brian Aherne (and I've also seen reference to George Brent and, yes, Warren William), but after things could not be worked out with the more established actors Warner's turned to fresh faced contract player Flynn who had previously worked for director Michael Curtiz in the aforementioned Perry Mason film. It'd be Flynn's second of 12 films with Curtiz, a wildly successful but at the same time sour relationship, as well as his first of 8 alongside de Havilland.

What a beauty! Olivia de Havilland as Arabella Bishop

All that gets us to the film itself, and what a film! Lest you dismiss Captain Blood as just another pirate movie I'd reply that it's half that. We follow Flynn's Peter Blood, a late 17th Century Irish doctor in England, to his trial after he is caught at the wrong place at the wrong time by King James' men and across the Atlantic into slavery at Port Royal where he's purchased through mercy and a lusty eye by de Havilland's Arabella. No such mercy is afforded by Arabella's uncle, Colonel Bishop (Lionel Atwill), a favorite of King James whose standing at Port Royal is only behind that of the gouty Governor (George Hassell). From the film's opening in 1685 it takes two whole years for our character to turn to piracy, or fully one hour of our viewing time.

Before Blood takes to the sea he plans an escape involving the financial backing of a pair of dimwitted Doctors (Donald Meek and Hobart Cavanaugh), whose standing in the colony has been withered by Blood's own successful treatment of the Governor, and the freedom of movement afforded a colonial debtor, Honesty Nuttall (Forrester Harvey). The plan is all but thwarted when Blood is discovered treating his friend, Jeremy Pitt (Ross Alexander), against Bishop's orders while Pitt is still tied to the whipping post. Enraged, Bishop has Blood tied to the post and is about to unleash a fury which will certainly detain Blood and the boys when off in the distance cannon fire is heard and Flynn, in a film absolutely filled with fantastic lines more or less winks at us and offers: "Now this is what I'd call a timely interruption."

It's from there that Blood and his fellow slaves take advantage of the distracted Spanish, who as the title card proclaims, "pillage and celebrate in pirate fashion," by taking over their landing vessel and making their official turn to piracy. Blood remarks that "We the hunted will now hunt." Yes, piracy is glamorized in Captain Blood though remember most of our crew of slaves were originally condemned together in England. These men aren't your typical band of marauding criminals, they were condemned of war crimes. They are simply regular folk battling against the injustices of their King and so possess a streak of morality is not all that unexpected, especially our hero Blood.

Flynn spouts so many great lines throughout Captain Blood that I considered a list, but then realized I couldn't understand him about 10% of the time. His best speeches are long and loud.

Despite Guy Kibbee's Hagthorpe's wish of stretching Bishop over the cannon so he could spread his guts all over the place, he's easily convinced by Blood that the most fitting punishment for Bishop is simply to be thrown overboard. See, they're not all that bad. On board beyond Blood's natural leadership, other assets include Alexander's Pitt, formerly a ship's navigator, Robert Barrat's Wolverstone, who had six years in King James' Navy, and Kibbee, sporting a hilarious wig as Hagthorpe, previously a gunner in the Navy himself. Perhaps the most depraved of the bunch on board Blood's ship is Honesty Nuttall (Harvey), the debtor and along with the Governor, our comedy relief.

Excepting some busy battle vignettes we're largely left to imagine any brutality, though the ship's charter lays out recompense for missing limbs and we are shown a couple of the men collecting after an early conquest--600 pieces of eight for loss of a right arm, 500 for loss of a left--"There you are, Andrew, and good luck," Blood says cheerily to one of the men after paying out 500 pieces of eight for his missing left arm.

Far more vicious were the lives the men lived as slaves under Atwill. This piracy seems simple enough by comparison, but for a couple of near fatal mistakes: 1) Blood's forging of an alliance with the French Captain Levasseur (Basil Rathbone), and 2) Blood's love of Arabella Bishop, which clouds his better judgment in a couple of key instances, though those instances do work out to Blood's favor whether through skill (overcoming Levasseur) or luck (the political landscape in England). Ironically Blood tells Levasseur that "women will be the death of you," and while that scenario plays out in the first of Flynn and Rathbone's memorable movie sword fights, the tension exists which could make Blood's line his own prophecy as well. As the action and the tension of the love story build to their climax his own men refer to Blood as a "lovesick madman."

Flynn and Rathbone clash for the first time on screen

As Korngold's theme rumbles through my head even now I think of Captain Blood as a film I wish I'd seen much sooner, how great it would have been to have seen this one as a kid so I could have played it with my friends! I can just imagine us beating the tar out of each other with switches in recreating Flynn and Rathbone's duel, though I suppose we did so anyway all in the name of Star Wars at that time. As it is even as an adult the dashing Flynn accompanied by that energetic score still manages to stir in me an excitement which has yet to dim through numerous viewings.

One final note, the idea of this, scares me. I may be wrong but in development I hope she stays!