Since the time of this post I've also added a dedicated Guy Kibbee biography to the site. 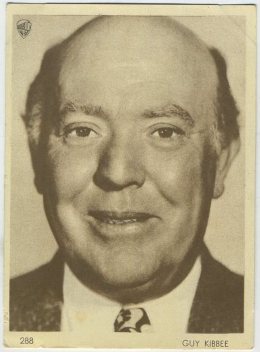 Turner Classic Movies has chosen the evening of March 6 to randomly air 5 movies featuring Jean Arthur. While that's wonderful and certainly what I've been looking for after suffering through 31 Days of Oscar, I'm even more excited by TCM's daytime offerings: 10 movies featuring character actor Guy Kibbee, who was born on this date in 1882.

TCM's Tuesday Guy Kibbee offerings are all pre-code releases from 1931 through mid-1934 and feature mostly titles I haven't seen. My busy DVR spent most of Monday transferring my few February recordings to disc in order to clear as much room as I could for Tuesday's Kibbee-fest. Here's the entire run down:

Please note that this is TCM US schedule and all listed times are EST.

The only one of these I've seen is The Strange Love of Molly Louvain, an Ann Dvorak movie that I highly recommend for fellow pre-code fans. A few others I know I've recorded (Havana Widows, Big Hearted Herbert) but have yet to get to.

TCM does not air the Guy Kibbee movie I recently wrote about on this site, Going Highbrow (1935), but I did include a mini Guy Kibbee biography up through that time within that article and so I reprint it here on Kibbee's birthday: 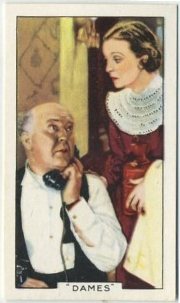 Guy Kibbee is one of those overnight sensations who brewed a good 20 years before getting there. He had played over twenty years in stock companies west of the Mississippi before making his Broadway debut in 1930's Torch Song at the Plymouth Theater. He was 44. Torch Song ran for 87 performances and Kibbee was described by several sources as the hit of the Broadway season. After Torch Song Kibbee appeared in a second play on Broadway, Marseilles, but it quickly closed.

He then returned West, but this time to Hollywood, and impressed with a small part as a police commissioner in the Nancy Carroll film Stolen Heaven (1931) at Paramount. Kibbee's rise on film was just as sudden as his discovery in theater as he next played supporting roles in the William Powell-Carole Lombard drama Man of the World and was Sylvia Sidney's father, Pop Cooley, in the hit City Streets (1931), which still plays well today.

After that he reprised his Torch Song role of Cass Wheeler in MGM's adaptation Laughing Sinners (1931) starring Clark Gable and Joan Crawford. Soon Kibbee would sign with Warner Brothers as a featured contract player and the very busy actor we know from so many films of the period, like Going Highbrow, began to get really busy!

And to make that biography a little less open-ended, here's a brand new finish:

Guy Kibbee's final film role came in 3 Godfathers in 1948 after which he did some television work through 1950. Unfortunately the end was not pleasant for Guy Kibbee. He stopped working because he was ill with Parkinson's Disease and spent a couple of years as a patient in a home for sick and needy actors prior to his death on May 24, 1956.

At the time of his death Kibbee's only income was reported to be his social security checks and his passing was greeted with unfortunate headlines such as "Guy Kibbee Dies Penniless." While that heartless headline was buried on page 27 of the May 25, 1956 edition of the San Mateo Times, Guy Kibbee was still beloved enough at the time of his passing to rate a front page obituary in many newspapers around the country.

Surely one day I'll write the middle of that biography!

Sure, I've seen it a lot, but wouldn't the only movie Guy Kibbee appeared in with Jean Arthur have made a nice 8 pm segue from the Kibbee birthday schedule to the evening of Jean Arthur films? Still, The Talk of the Town at 8 pm is great, I'm not complaining!

Returning to Tuesday's TCM schedule it looks like Laughing Sinners is certainly one to set the DVR for today. That probably goes without saying for most what with Joan Crawford starring and Clark Gable featured, but my own main interest in Laughing Sinners is that offers a chance to see Guy Kibbee in the part which made him on Broadway and brought him so quickly and successfully to Hollywood.

Note: I've since watched Laughing Sinners and even wrote an article about it which you can read HERE. Following are two paragraphs excerpted from that Laughing Sinners piece specifically about Guy Kibbee's part of Cass Wheeler:

It's an interesting schedule from Turner Classic Movies today: They appear to skip all of the Guy Kibbee movies I really know and love! No City Streets, Union Depot, Taxi!, The Dark Horse, The Conquerors, Central Park, Gold Diggers of 1933, The Life of Jimmy Dolan, Lady for a Day, The World Changes, etc. All titles I really enjoy, all made during the same period as today's TCM schedule. Big or small, none of them air. I know Molly Louvain is a winner, here's hoping for nine others that are just as good!

Recommendations from TCM's March 6 choices ... anyone? Which should I watch first after the DVR's red light dims?