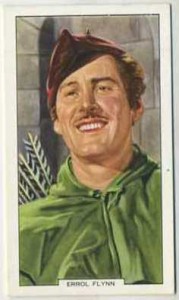 Partial myself to Flynn's swashbuckling pirate roles in "Captain Blood" (1935) and "The Sea Hawk" (1940), there's no denying that with casual film fans his legend has lived on largely through his portrayal of Robin Hood. The downside to being so heavily associated with a specific role is that a good deal of Flynn's other work, such as those pirate films, tends to be ignored, while the upside is such a charamatic performance can trigger interested parties to seek for more.

And really, Flynn's greatest fame coming from Robin Hood today is a whole lot better than the infamy associated with him by his contemporary fans. To the uninitiated, the saying, "In like Flynn," may still be uttered, but most people aren't taking the time to seek the origin. Sure, some of us still talk about Flynn with a mischievous wink, but what's often behind that is an appreciation for the tremendous personality behind so many roles we've come to know and love over the years.

Far from being simply the greatest swashbuckler since Douglas Fairbanks, Sr., and with all apologies to Tyrone Power fans, none to top him since, Flynn played in variety of roles, and played them well. From the WWI flying ace Captain Courtenay, who must cope with the guilt of sending young fliers off to die in "The Dawn Patrol" (1938) to his incredibly charismatic performance as late 19th century boxer Jim Corbett in the 1942 biopic "Gentleman Jim," Errol Flynn remains a pleasure to watch onscreen to this day.

Besides Flynn in the title role, "The Adventures of Robin Hood" is noteworthy for its use of the Technicolor process, which shows off such vibrant colors here you almost feel like you're watching a cartoon. The Oscar winning score by Erich Wolfgang Korngold, is often cited as one of film’s best ever. Another winning ingredient is the masterful sword work throughout thanks to the presence behind the scenes of archer Howard Hill as well as Flynn's on-screen foil, Sir Guy of Gisbourne, played by film's most famous Sherlock Holmes, Basil Rathbone. Rathbone also crosses swords with Flynn in "Captain Blood."

Co-directed by film masters Michael Curtiz and William Keighley, "The Adventures of Robin Hood" would win 3 Academy Awards plus be nominated for Best Picture which ultimately went to Frank Capra's "You Can't Take it With You" (1938) that year.

Errol Flynn appears here in the role of Robin Hood on a couple of different tobacco cards issued out of Great Britain.  Up top is card #12 of 48 from the 1939 Gallaher set "My Favourite Part" and on the lower left portion of the page Flynn is shown as card #12 of 50 from the popular "Turf Cigarettes" set issued by Carreras in 1949.  Either card can be found in sharp condition for just $8-$10.

At the bottom of the page, Flynn is shown with leading lady Olivia de Havilland, this time in "The Charge of the Light Brigade" (1936) on a "Serie F" tobacco card from Chile.  Issued by Cigarrillos Okey, the approximate date for this card is 1937.  Extremely rare, though still quite affordable, the Cigarrillos Okey cards are a little more valubale than those British issues mentioned above.

For more info: If you miss this morning's airing of "The Adventures of Robin Hood" I highly recommend Warner Home Video's 2-disc Special Edition found here on Amazon.  In addition to the feature on disc 1, disc 2 is packed with documentaries including "Welcome to Sherwood: The Story of The Adventures of Robin Hood," "Robin Hood Through the Age," shorts featuring archer Howard Hill and Errol Flynn off-set on his boat, The Zaca.  It's an excellent collection.  You can also rent it from Netflix where it's available for Instant Download as well.