Turner Classic Movies presents 24 hours of Danny Kaye "on what is likely the 100th anniversary of his birth," according to the Now Playing Guide. The Guide does note "sources vary" and most online seem to point to January 18. Close enough.

It's all here today: Up in Arms, The Inspector General, The Secret Life of Walter Mitty, Hans Christian Anderson and The Court Jester, plus six additional feature films, an episode of the The Danny Kaye Show and Kaye's 1971 appearance on The Dick Cavett Show.

For information about the life and career of Danny Kaye see his IMDB page, the Danny Kaye profile at TCM.com and this recent Movie Morlocks post filled with Kaye photos.

And don't miss this fact-filled 1987 Danny Kaye obituary originally published by the Los Angeles Times and reprinted HERE in the Eugene Register-Guard. 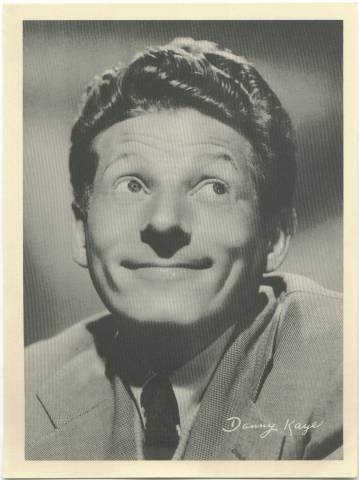 Just click on images for more information about any of the Danny Kaye collectibles pictured above. You'll be taken to my Gallery & Guide pages dedicated to each specific collectible.