Perspective for my first impressions: First time viewer of Little Women, though I think I had previously bumped into the last half hour. Some of the Paul Lukas scenes were familiar. I have not read the classic 19th century Louisa May Alcott novel. View what follows as either tainted or enhanced based upon those revelations.

Little Women left me wanting more, especially more pre-New York. I’m not a big Katharine Hepburn fan but I’m a bigger one after finally having made my way to this title.

The dynamic between Hepburn’s Jo March and her sisters: Joan Bennett as Amy, Frances Dee as Meg and Jean Parker as Beth, can be a bit sugary at times but this didn’t cause me to enjoy them any less. I wouldn’t have minded them staying together even deeper into the movie.

Like Jo asks at one point: “Why do things always have to change just when they’re perfect?”

Hepburn’s Jo is the tomboy of the group. A writer, she experiences life to its fullest and does her darnedest not to hold back. An independent thinker, Jo is brazen and loud, typically bellowing out a declaration of “Christopher Columbus” to express shock, surprise or delight. We also get to see the other side of Jo, especially as she develops from late adolescence to young womanhood and these touches humanize her all the more.

Bennett’s Amy, an artist, is the brat of the bunch but has more than enough redeeming qualities to make up for her social affectations. Amy is obstinate and prone to selfishness but charitable upon reflection, as pure at heart as any of the March girls.

Frances Dee as Meg is the most traditional of the little women and her story takes the most common path of the period, quickly settling down into marriage, children, etc.

Jean Parker is Beth, the tragic sister. More in a moment. 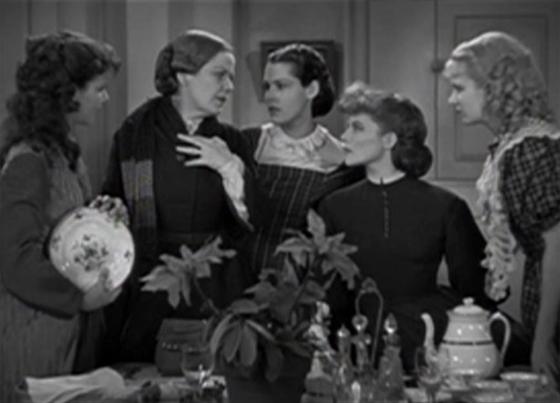 Next door is the intimidating estate of Mr. Laurence (Henry Stephenson), who after a fearful build-up turns out to have a heart of gold. Jo is drawn to the estate because of Laurence’s grandson Laurie (Douglass Montgomery) with whom she romps about the outdoors throughout the tail end years of her carefree youth.

I’m most familiar with Jean Parker from Lady for a Day, which released just a couple of months ahead of Little Women in 1933. She’s my least favorite character in that movie and thus I almost always begin any Parker movie with a negative prejudice against her. Little Women gives me very positive memories of Parker to help counterbalance that going forward.

Parker really does break your heart in Little Women. Her shy Beth is the musical member of the family. Even her sisters are surprised when Beth accepts an invitation from Mr. Laurence to come play his piano. The old man is drawn to the kindness of the sisters, and of them all Beth is the one most giving of herself. A special bond develops between Mr. Laurence and Beth.

The sisters inhabit an insular world, one filled with love that remains ideal even when disappointment and tragedy pay a visit. It’s a world you wish you never had to grow up and leave.

But after some success at freelance writing Hepburn’s Jo does depart, leaving her warm yet isolated life with her family for the wilds of New York and pursuit of the writer’s life. An ambitious choice for a woman during her time. While nursing heartache over Laurie an unlikely match between Jo and neighbor Professor Bhaer (Paul Lukas) soon sprouts from what had begun as a student-mentor relationship.

Also of note in the Little Women cast are Spring Byington as the girls’ mother, called Marmee by them; Samuel S. Hinds in a smaller part as their father who begins our story absent due to Civil War service; John Lodge as Laurie’s friend Brooke; and, breathing life into yet another 19th Century widow of means, Edna May Oliver as Aunt March.

RKO’s Little Women is based on one of the most read and beloved novels of all time, Little Women by Louisa May Alcott. It is the third screen version of the story following silent versions made in Britain in 1917 and the U.S. in 1918. MGM remade it in 1949 with June Allyson as Jo and Columbia in 1994 with Winona Ryder in the part. It has also been adapted for television. 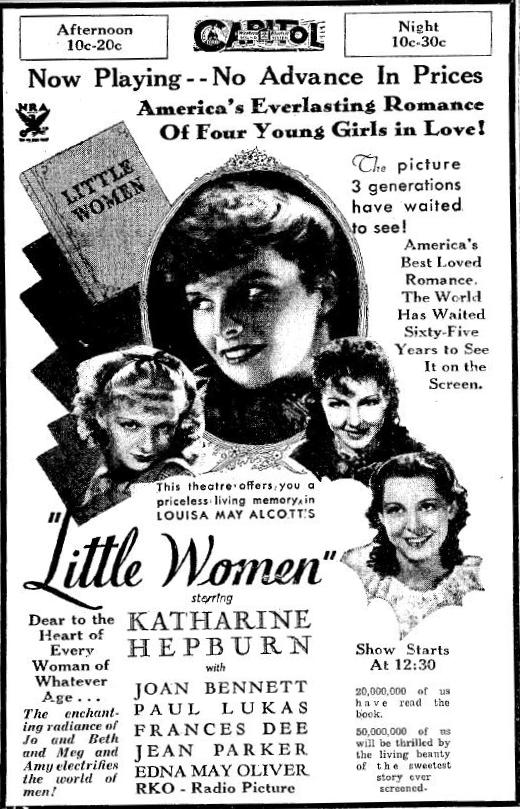 As you might expect Little Women proves a great title for all ages though not without its moments of melancholy and outright tragedy. Despite that hankie alert Little Women is generally uplifting and provides a fine role model for younger viewers in Jo.

For adult viewers it is likely to selectively recall the finer moments of your own youth and may likely jerk a few tears when personal memory meets idealized movie nostalgia.

Fine performances all around with Katharine Hepburn especially excelling and providing a benchmark for all future actresses. Hepburn did win her first of four Academy Awards for Best Actress at the 1934 Awards, but she had been nominated for Morning Glory (1933), not Little Women.

Little Women is available on DVD

from Turner Home Entertainment. For even more bang for your buck pick it up with three other Katharine Hepburn classics as part of TCM’s Greatest Classic Legends Collection

I viewed Little Women on Turner Classic Movies which is also where my accompanying screen captures come from. Check the top of TCM’s Little Women page for future air dates.