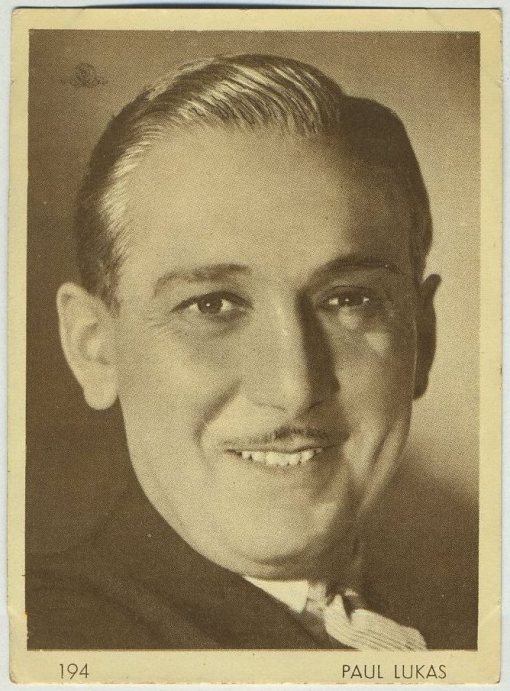 The Oscar winning actor Paul Lukas was born Pál Lukács in Budapest, Austria-Hungary, May 26, 1891 (though various sources list his year of birth from as early as 1887 to as late as 1895).

He made his stage debut in Hungary in 1916 and began appearing in movies there in 1918. He acted in two Alexander Korda films while still in Hungary, each featuring Korda’s first wife, Maria Corda. Lukas came to Hollywood in 1927 and was quickly challenged by the emergence of talking pictures.

With his English consisting of little more than what was useful for ordering dinner, Hollywood journalist Robbin Coons wrote, “he does not mind confessing that a voice double was used for him” in The Wolf of Wall Street (1929). But that idea repulsed the successful stage veteran who disappeared for several months in order to learn English. He returned later that year using his own voice in Halfway to Heaven.

Lukas grew popular during this time playing a mix of slick villains and romantic leading men and didn’t mind which he was assigned. “I am an actor because I love the profession and I don’t care what type of character I am portraying, as long as the part really gives me something to do” (Thomas).

He was the Big Fellow, gangster kingpin in Rouben Mamoulian’s City Streets (1931) starring Gary Cooper and marking Sylvia Sidney’s first film under contract to Paramount. He was far more sympathetic as the honorable man forced into being a stool pigeon in The Vice Squad (1931) with Kay Francis. He unleashes the Stanislavky method upon the world of contract bridge in the silly Grand Slam (1933) with Loretta Young. On a grander scale he was the sympathetic Professor Bhaer opposite Katherine Hepburn in 1933’s Little Women for George Cukor at RKO.

Continuing to name some of Lukas’ better or just better remembered roles of the post Code ‘30s: He is Philo Vance in The Casino Murder Case (1936), he has an affair with Ruth Chatterton that captures Walter Huston’s attention in Dodsworth (1936), earlier this week we saw him on TCM playing not-so-nice in Alfred Hitchcock’s The Lady Vanishes (1938), and he’s a fascinating Nazi in Confessions of a Nazi Spy (1939), airing on TCM today.

Confessions of a Nazi Spy is a fine title to pair with his later Oscar-winning performance as an anti-Fascist in 1943’s Watch on the Rhine. Lukas was still comfortable playing either the hero or the villain.

Paul Lukas won his Academy Award over a field including Gary Cooper in For Whom the Bell Tolls and, more notably, Humphrey Bogart in one of the most beloved performances of all time in Casablanca. It wasn’t any fluke. Lukas had won acclaim in originating the role of Kurt Muller in the Broadway production of Watch on the Rhine and had already captured Best Actor honors from the New York Film Critics Circle and picked up the Golden Globe for Best Acting by the time of the Oscars.

While Paul Lukas never duplicated the success of Watch on the Rhine--it was the role of a lifetime for him--he did continue working in movies and later on television nearly until the time of his death in 1971. More modern film audiences would recall him in movies such as 20,000 Leagues Under the Sea (1954), and in ‘60s supporting roles in titles such as 55 Days at Peking (1963), Fun in Acapulco (1963) with Elvis, and Lord Jim (1965). 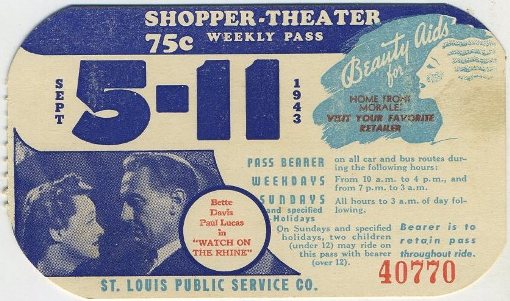 1943 St. Louis area bus pass pictures Lukas with Bette Davis in promotion of WATCH ON THE RHINE. Clicking any of the Paul Lukas collectibles on this page will bring you to a full gallery highlighting that card or collectible set.

Paul Lukas had planned to settle in Morocco but was hospitalized in Tangier and died there August 16, 1971.

“When I get to the top I am going to stay there, too,” Lukas told Dan Thomas in 1930. “I don’t mean that in a boastful way, but I have a confidence in my own ability—a thing every man must have if he is going to succeed. Staying at the top is far more difficult than being just one of the mob, however. In that respect, acting is very much like flying—the higher you go the further you have to fall.”

Paul Lukas Movies in the Papers