I'm currently working on a post about RKO's 1932 prison chain gang drama Hell's Highway, a title which released to theaters about a month and a half ahead of that more famous chain gang movie.

I'm hoping to have that for you tomorrow, but in the meantime I found myself distracted by the collecting activities of one prisoner. 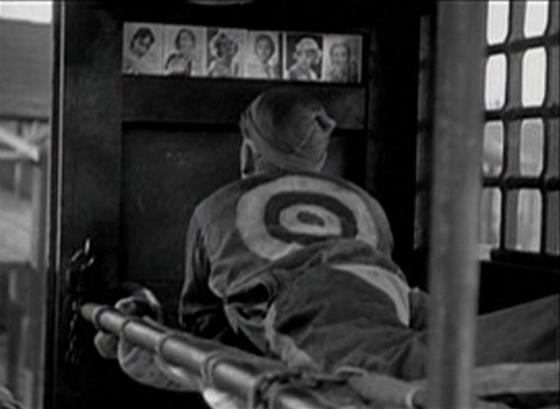 Before we get distracted, yeah, that is a target on his back. That's on every inmate's uniform in Hell's Highway.

We're given a closer look at Constance Bennett, in a very familiar pose, and Gwili Andre:

The image Romeo gazes upon each morning was picked up by Aguila chocolates in Uruguay and used on the card above, one from a set of 300.

(Nice try, Romeo, but we know better than Duke does.)

“It’s a good thing they got you locked up in a chain gang,” says Duke as he heads out for the day.

I'll say, keep that guy away from Connie! Though he also seems to have the hots for Rochelle:

The Rochelle Hudson/Mary Ellen photo gets Johnny in a bit of trouble after Romeo steals it out of his pocket to add to his own collection. But more on that next time.

It's good to know that no matter how harsh conditions on the chain gang may be, Romeo still remains an active collector. A little later on he has an entire new set of photos pinned up behind him: 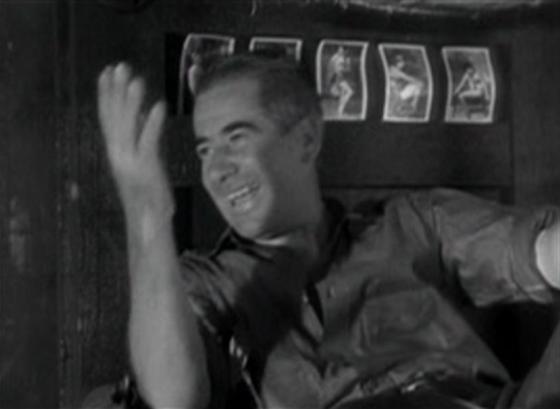 Those look to be more random cheesecake shots picturing unidentified models. I'm more interested in that first group of photos Romeo had on display. Once more:

There are six in all. We've got two of them ID'ed, Constance Bennett and Gwili Andre--and I swear I've had that Gwili Andre photo before but I could not for the life of me find an image on file this evening.

I'm going to guess that the actress to the left of Constance Bennett is Dolores Del Rio.

Different image, but I tried to select my closest match when attempting to identify these photos.

Up next, to the right of Gwili Andre, I'm pretty sure we have Irene Dunne, who was also working for RKO at this time:

I can't pull out the next one. All I can say is that what I at first thought was a bad hairstyle is actually a hat.

I've convinced myself that the last one is Helen Twelvetrees:

Especially since she had her hand, or hands, on her face in a few different card poses I had on file. Just like the actress in Romeo's right most photo. Seems to be a Helen Twelvetrees type post at least.

But I wouldn't flinch if you said Ann Harding.

Here's the entire bunch, once more:

Can you name Romeo's collection? I've got, Dolores Del Rio, Constance Bennett, Gwili Andre, Irene Dunne, unknown and Helen Twelvetrees. The movie spots us Bennett and Andre. All those I've named worked for RKO during this time.

I'll be back next time with a more in-depth look at Hell's Highway (1932) itself.

As is so often the case my copy comes from a previous TCM airing and so I was disappointed that there was no video release for this movie. That really limits the audience.

Here's something to expand it though:

In case that embed does not show up for you, you can view Hell's Highway for free at the Internet Archive HERE.

It's a whopping 61 minutes and highly recommended, especially for fans of I Am a Fugitive from a Chain Gang (1932). Check it out and come back and chat in a day or two after I post the main article to the site!

See you then,
Cliff 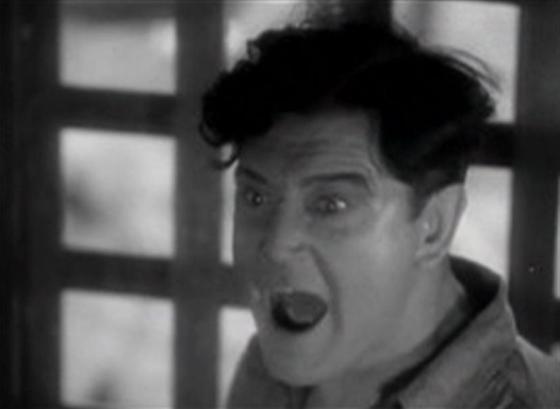 Closing it out with a shot of Richard Dix, who is actually the star of this movie!