You are here: Home / Archives for Movie Reviews

Spoiler-free reviews of movies from Hollywood's Golden Age, especially the 1930s. Most reviews also include research into background of the film and, when relevant, the history surrounding the subject of the movie.

The public was air-minded when RKO released Men Against the Sky (1940), an exciting “B” film starring former “Ace of Aces” Richard Dix, with Kent Taylor, Wendy Barrie, and Edmund Lowe. A look at why the public was so fascinated by flying at that time, and how the four stars and other elements of the film worked so well together.

A look at First National’s One Night at Susie’s, a 1930 crime film starring Billie Dove and Douglas Fairbanks Jr., but really showing off Helen Ware to advantage. Frederick Hazlitt Brennan’s 1929 short story from Liberty magazine is discussed and a biography of Miss Ware is also included. Plus, just exactly how long is this movie?

From a novel by Fannie Hurst, MGM’s Five and Ten stars Marion Davies and Leslie Howard, but this tale of the nouveau riche is at its weakest during their scenes. Strong support from Richard Bennett, Irene Rich, and Kent Douglass should have been even stronger. A recent MOD DVD-R release from Warner Archive.

Despite its poor reception in 1932, today Downstairs is often pointed to as John Gilbert’s best talkie and further evidence that his voice was not poor. A look at some key scenes with Virginia Bruce and Paul Lukas, plus just how bad of a guy was Gilbert’s Karl?

She Had to Say Yes is a pre-Code film so outrageous that it’s bound to bother men and women alike. An expose on the life of the “customer’s girl,” the Depression era’s version of a high class call girl in business circles. Starring Loretta Young, who manages to be pawed by Regis Toomey, Lyle Talbot, and Hugh Herbert, all in the same movie.

Warren William has his breakthrough role in The Mouthpiece, first and best of the 1932 cycle of William J. Fallon inspired lawyer films. Background on Fallon and his legacy included.

Upon publication reviews called John Monk Saunders anything from a hack to a plagiarist when his Single Lady cashed in as an inferior version of Hemingway’s The Sun Also Rises. Adapted as The Last Flight, Saunders’s story emerges as perhaps the best of any film about The Lost Generation. Directed by William Dieterle, with excellent performances from Richard Barthelmess and Helen Chandler.

A history of Madame X concentrates on the 1937 film version starring Gladys George. Includes a biography of Gladys George with comparison to Ruth Chatterton’s 1929 performance.

A look at Lee Tracy as the Walter Winchell inspired star of pre-Code classic Blessed Event (1932). Includes back story about the stage adaptation, movie casting and speedy film production, plus a bit about Walter Winchell himself, circa 1932. 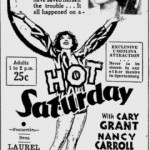