Classic Movie Daily subscribers will find images of Edward Earle and Heinie Conklin inside today's issue of the Daily, though you'll likely be more excited by the pics of Barbara Stanwyck and Ginger Rogers. Also included today is an image of Mary Philbin followed by a brief clippings post.

—7:15 am Crime School (1938), one of a few remakes, reworkings, or reimaginings that TCM is playing this morning. In this case I prefer The Mayor of Hell (1933), but you could do worse than Bogie and the Dead End Kids.

—10:30 am My Bill (1938), Widower Kay Francis brings disrespect to the rich side of the family, who suspect her Bill (Dickie Moore) isn't really their Bill. The rest of her children, including Bonita Granville, whose origins are not in dispute, are welcomed to the rich side of the family and turn on their mother (Francis) without a whole lot of prodding. Bill is loyal to the end though. Surprisingly good as Francis once again superior to the material Warner Bros. was giving her at this time.

—3:30 pm The Return of Dr. X (1939), generally thought of as Bogart's lowest point, and it's hard to disagree. Amazing how quick that turned around. The movie really isn't that terrible, except for Bogart, whose appearance makes it tough to watch. Directed by Vincent Sherman, who was born on this date.

—4:45 pm The Man Who Talked Too Much (1940), not nearly as good as the original, The Mouthpiece (1932), but I liked it better than the later remake, Illegal (1955), which I thought was pretty bad (Might be the only Edward G. Robinson movie that I don't like). George Brent is in the crooked lawyer role this time. A later movie for Richard Barthelmess, who's good as the crime lord. Also directed by Sherman.

—Evening theme is John Wayne in the 1970s. "Summer of Darkness" begins again Friday at 7:45 am with a good one, Tension (1950) starring Richard Basehart, Audrey Totter, and Cyd Charisse.

—GetTV Thursday features a run the same four Stanwyck's they've been playing lately. Can't blame them too much on her birthday, but I'm getting tired of typing these (Meet John Doe, Shopworn, Forbidden, Ladies of Leisure). When those end, at 7:00 pm, a four-movie marathon of the Crime Doctor starring Warner Baxter begins. The original plays at 7. Here's more on some of the other entries.

—No, you didn't miss the issue yesterday, I missed the issue—sorry about that! I did have the birthdays typed out and ready to go though, so I may as well give them to you:

—I also planned on linking to my Barbara Stanwyck biography yesterday, but since she was actually born on today's date, that still works. Here you go. And here's my review of Gambling Lady (1934), one of the '30s Stanwyck movies that TCM played yesterday.

—Speaking of that Stanwyck marathon, I caught the better portion of Night Nurse for, oh, must be around the 15th-plus time, and it's still so good. Gable is electric. It's probably because of the Gable that came after this, but somewhere in the back of my mind I always expect him and Stanwyck to get together in this one. There's just so much heat there, but this time it really is fire. I hold out hope up until the time he slugs Charles Winninger, and then I think we've hit the point of no return. Hey, it's not like Ben Lyon's character is a steady choice for her to fall in love with!

—If you were looking for a big Ginger Rogers clippings post, well, I already did that a few years ago. Here it is.

—I was excited to pass 500 fans on the Immortal Ephemera Facebook page—thanks very much if you've taken time to like the page. If you're not following yet it's more or less a stream of completely different images than I post here, about 8-12 a day, that I try to tie into the TCM programming. Failing that, I post images from random card sets. Article links are also posted when new or relevant to the TV that day.

—I pushed Helen Twelvetrees into the 1950s yesterday, which means the end is near. For once, I seem to be on target to meet one of my goals, which is sitting down with a print-out of the finished draft of the biographical section this weekend. In fact, I've already double-checked all research through the end of her story, so this should be easy(ish) sailing. Part of what's taken so long is that I do edit, fact check, and insert footnotes after drafting each section each day, so what I have is more polished than what's typically thought of as a first draft. The next painful bit is going to be inserting chapter breaks, which I've done for only about half of this section. Only where they've most obviously revealed themselves.

Have a great day and thanks for reading!
Cliff 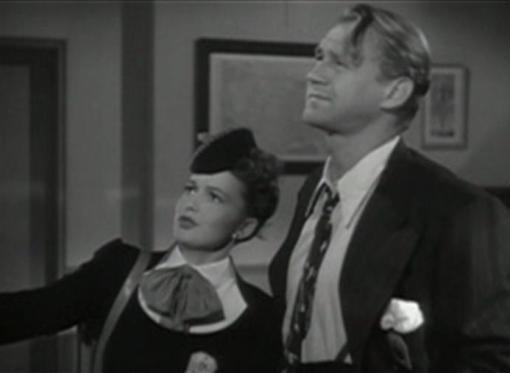 Above: Sonny Tufts with Olivia de Havilland in Government Girl (1943).

More Olivia de Havilland Friday Night Because, hey, you only turn a hundred once, right? Best Star of the Month … END_OF_DOCUMENT_TOKEN_TO_BE_REPLACED