“…you're going out a youngster, but you've got to come back a star!” – Warner Baxter’s Julian Marsh to Ruby Keeler’s Peggy Sawyer in 42nd Street (1933).

And despite his receiving only the second ever Academy Award for Best Actor as O. Henry’s The Cisco Kid in In Old Arizona (1928) it’s Marsh that Baxter is best remembered for today, by far.  Baxter himself was said to have favored the Kid, a role he’d play two more times in The Cisco Kid (1931) and The Return of the Cisco Kid (1939).

Born in Columbus, Ohio on March 29, 1889, Baxter was an office boy prior to his celebrity.  It sounds way too storybook to be believed, but Baxter’s 1951 obituary from the Associated Press credits his own first big break into show biz as very much the same as Keeler’s Peggy Sawyer.  Mentioned casually in the summary of his life, without any direct reference to 42nd Street, the AP says Baxter got his start on stage in Columbus in 1910 when a dancer broke his ankle and Baxter replaced him.

While he didn’t come back a star quite yet, he did stick to the theater thereafter with the occasional period as an insurance salesman mixed in, one must assume to make ends meet.  He married his first wife, Viola Caldwell in 1911, but it was reported not to have lasted very long at all.  In 1913 he joined an Oklahoma Stock Company, but information is sparse about what Warner Baxter was doing between that time and his permanent arrival on the silent screens of the 1920’s.

One potentially interesting note from the A.P. obit relates to Baxter’s first film appearance, Her Own Money.  The IMDb dates the film as 1914 and appears to have no other details about it beyond the fact that Baxter appears in an uncredited bit role.  The A.P. dates Her Own Money as 1916 and claims that it starred Ethel Clayton.

Baxter shows up in only one Broadway show listed in the Internet Broadway Database, albeit a succesful one.  Lombardi, Ltd. was performed 296 times between September 1917 and June 1918, though Baxter doesn’t receive any mention in the notices which concentrate on stars Leo Carrillo and Grace Valentine.  Potentially another IMDb error, their credit listing for the film version of Lombardi, Ltd. includes Baxter in an uncredited bit role, but I find this highly unlikely since Carrillo, Valentine, nor any of the other stage actors were used in the screen version.  Baxter did however develop into a successful male lead for Paramount and Famous Players-Lasky throughout the 1920’s. 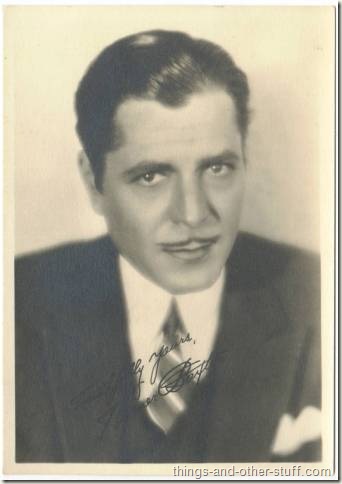 The film for which Warner Baxter won his Academy Award, In Old Arizona, comes with its own Peggy Sawyer story—Raoul Walsh had been set to both direct and star the groundbreaking Western but a jackrabbit jumped through his windshield and blinded Walsh in his right eye.  The injury would lead to the eventual loss of Walsh’s eye and he’d sport an eye patch thereafter.  Obviously, Walsh was out.

Other popular Warner Baxter titles today seem limited to West of Zanzibar (1928), which let’s face it, like 42nd Street remains popular not because of Baxter, but in this case Lon Chaney; a pair with Myrna Loy, MGM's Penthouse (1933) and Frank Capra’s Broadway Bill (1934) for Columbia; and finally 1936’s The Prisoner of Shark Island, a feature where Baxter is indisputably the star attraction as Dr. Samuel Alexander Mudd, the doctor who treated John Wilkes Booth on his way from the Lincoln assassination.  You think Muni had it tough on the Chain Gang?  Give Shark Island a try.

What I found interesting about Baxter and led to my writing about him in far greater detail than I had first imagined, is just how big this now all but forgotten star was.  If not for cementing his legacy with that 1930 Academy Award Warner Baxter would likely find himself in complete obscurity.  The amazing thing is just how very popular he must have been as throughout the late 1930’s he was among the highest paid personalities in Hollywood.

So what happened?  Well, during the 1940’s Baxter slipped to B status playing the lead, Dr. Robert Ordway, in a series of ten Crime Doctor movies distributed by Columbia Pictures from 1943-1949.  Perhaps this descent has diminished his overall legacy?

In his spare time Baxter was a tinkerer and inventor who as reported by Popular Mechanics in 1935 co-created a revolver-searchlight which would cast a light on a target and allow a marksman to fire at it through the dark.  Later he invented a radio-controlled device that would allow police and firemen to change traffic signals from up to two blocks away in order to better guarantee them safe passage through intersections.  Baxter installed this device at a local Beverly Hills intersection at his own expense in 1940 and it was said to have worked.  Said Baxter, “You just push a button on the dashboard of your car and the signals turn red in all directions.”  In the same interview Baxter claims that he’s used his earlier invention on hunting trips and has found that it “works perfectly.”

The only other item of interest I could find about Baxter’s personal life is a constant reference of being at William Powell’s side when Jean Harlow died.  Baxter and Powell appeared together in three 1926 features at Paramount, Along the South Seas, The Runaway, and The Great Gatsby, in which Baxter played Jay Gatsby, and I can only assume they formed a long-lasting friendship from that time.

Warner Baxter’s own end was filled with pain and suffering.  Newspapers report two hospitalizations early in 1951 prior to his death May 7 of that same year.  Baxter suffered from terrible arthritis that caused so much pain he wasn’t even able to eat.  This developed into a vitamin deficiency and left him on the verge of starvation.  In February ‘51 Baxter spent three weeks in a hospital for treatment, improving well enough during that time to be sent home.  During his second hospitalization in April, Baxter was given a lobotomy with hopes that the operation would lessen the pain and allow him to eat again.  Thankfully he was spared starvation when bronchial pneumonia set in and caused his death at age 62.

Baxter’s obituary says that he was survived by his beloved second wife of 33 years, Winifred Bryson, a veteran of the stage and screen herself through 1928, and his mother, Mrs. Jane Baxter.  I could not find any reports of children.

Warner Baxter in my eBay Store:
(Shop all of my eBay listings here