You are here: Home / Movie Star Biographies / Arthur Hohl – Broadway to Hollywood, Double-Dealers All the Way 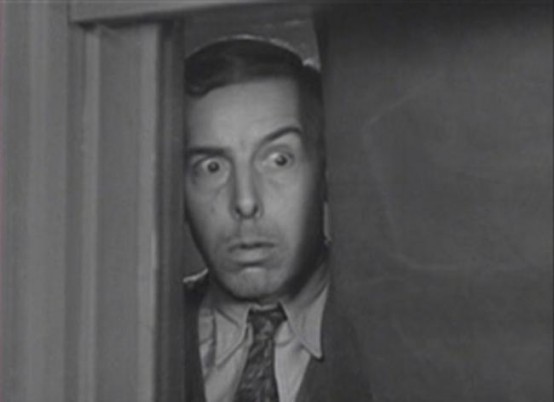 Arthur Hohl was another nasty piece of work on screen, though he seems to have lived a relatively quiet and stable life that was largely consumed by his work. Hohl’s gaunt appearance aided him in playing villainous parts in movies throughout the 1930s and ‘40s. While he almost always wielded a general nastiness, Hohl was often the cowardly double-dealing type of villain, ultimately caught or called out for his actions and looking every bit as guilty as he always was. Hey, this guy played Brutus in Cleopatra (1934), a part that definitely cast him in the proper skin.

Arthur Edwin Hohl was born in Pittsburgh, Pennsylvania, May 21, 1889. His father, Leonard Hohl, was born in Switzerland and came to the United States in 1883. Likewise, Arthur’s mother, the former Christine Metzger, arrived from Germany the year before her husband came to America. They soon met and married in 1884, the same year that Arthur’s older brother, Leonard, was born. The family did not remain in Pittsburgh long, heading west to Butte County in California’s Central Valley shortly after Arthur's birth.

Leonard Hohl wanted his son to follow in his footsteps and become an engineer, but despite two years completed at Stanford University and a halfhearted attempt at employment as a surveyor, Arthur’s desire to become an actor was just too strong for him to deny. Arthur E. Hohl made his stage debut with a San Francisco stock company in 1910. Ironically, considering his future part in Cleopatra, Arthur played the title role in an Oakland performance of Julius Caesar the following year. Hohl eventually ventured East and made his Broadway debut in The Dummy in 1914, a production also featuring future Hollywood character men Ernest Truex and Edward Ellis.

Arthur Hohl was kept busy on Broadway throughout the 1910s until the Great War interrupted. A member of the Washington Square Players at that time, it was reported that Arthur Hohl would have been working under David Belasco the following season had he not been called overseas. Arthur was inducted into the Army a little more than a week after his twenty-ninth birthday in May 1918. He served overseas, on the ground in France, from July 31, 1918 through the time of his honorary discharge on July 25, 1919. In May 1919 he was elevated to Second Lieutenant, a commissioned officer’s rank.

Above: Hohl is seated holding something over the bucket in this photo from In the Zone published in Theater Magazine, December 1917. (Click to enlarge).

Upon his return to New York Hohl picked up his career where he had left it. In January 1920 he began a two-month run for The Theater Guild in The Power of Darkness, but it was his next part, playing a villainous character of mixed race in a supporting role in Martinique that brought Arthur Hohl his greatest recognition to date. It was a happy time in the life of Arthur Hohl, for one day after Martinique opened, on April 27, 1920, he married an English woman ten years his senior, Jessie E. Gray at New York’s City Hall.

In 1924 Hohl began a long run in the most successful role of his Broadway career when he took over for A.E. Anson in the part of Witzel in White Cargo (Made into a movie years later starring Hedy Lamarr and Walter Pidgeon). At this time Hohl developed a reputation as the “Iron Man Actor” because before he worked in White Cargo during the evening, he spent the daytime beginning his movie career. It must have eventually proved too much because Hohl’s three 1924 film credits remain his only movie work until 1931. For one of these films, It’s the Law, an adaptation of one of Hohl’s earlier stage successes, he had to play three parts—plus Witzel in the evenings! It was a lot for one man to keep straight.

Broadway critic Arthur Pollock remarked that Hohl played his part in White Cargo “each evening as if he had never played it before.” It provided great frantic energy on the stage, but Pollock said it was because the actor “lacks the mechanical skill that makes such energy each night unnecessary.” Hohl had other misgivings about his role in White Cargo:

“Here I am trying to be a good American in private life, while in Leon Gordon’s new play I am compelled to imagine myself a Negro-hater eight times a week. It’s inconsistent with my past life, even though the play is a powerful story of African life.

“You see, it isn’t very easy for me to forget a few things about the colored race, particularly the part it played in the World War. Yes, I happened to be in it.

“I’m not anxious to tell you what I did in the war. Nor shall I tell you of what the colored troops did there. That’s what we’ve got history books for, and if the compilers are not behemently [sic] klannish they have set down, or will in due time, all pertaining to the heroism of the colored troops. I saw it, as did many other. I should like to remember it and I am sure others would, too.

“But try as I might I cannot act Witzel without completely exhausting myself. I guess I’ll have to get rid of this costume. It’s part of my service togs, worn for a whole year on the battlefield. I took it from the body of one of my colored men—a hero, of course—and it’s bloodstained.”

And White Cargo wasn't the last smash hit that Arthur Hohl appeared in on Broadway either. Previous roles reveal how early he’d become typecast for the collection of devilish characters he’d later play on screen. Well, when Hohl wasn’t playing a criminal in the movies, he was usually cast as the coldblooded prosecutor trying to keep bad guys and wrongly accused heroes locked up. I suspect that bit of casting came natural to his Hollywood bosses based on Hohl’s role as the District Attorney in the 1927-28 Broadway hit The Trial of Mary Dugan, starring Ann Harding. When Hohl arrived in Hollywood just a few years later his first two parts were as attorneys in The Cheat (1931) and The Night of June 13th (1932). Those wouldn’t be the last humorless lawyers he played.

Above: Mickey Rooney with Hohl in Stablemates (1938).

Arthur and Jessie Hohl had owned a house valued at $15,000 in Queens, but uprooted themselves for Hollywood in 1931. The couple bought a home on Coldwater Canyon Road in Los Angeles and Arthur Hohl settled into a career that saw him cast in nearly one hundred movies between the time of his arrival in Hollywood and his retirement in 1949. Unlike many of his peers Hohl never did any television work, despite the fact that he lived long into the era. Perhaps too long to be remembered.

Arthur Hohl died in Los Angeles, March 10, 1964, at age 74. Cause of death is unknown, as is Hohl’s later life: there were no published obituaries. Public records cease after World War II registration, so I’m going to assume Arthur and his wife remained married until the time of his death. The former Jessie Gray is recorded under her married name of Jessie Hohl at the time of her death in Dorset, England in December 1972 at age 93. There was no record of any children.

Above: Hohl with a fancy mustache as Captain Nichols in The Narrow Corner (1933). He shares the scene with William V. Mong.