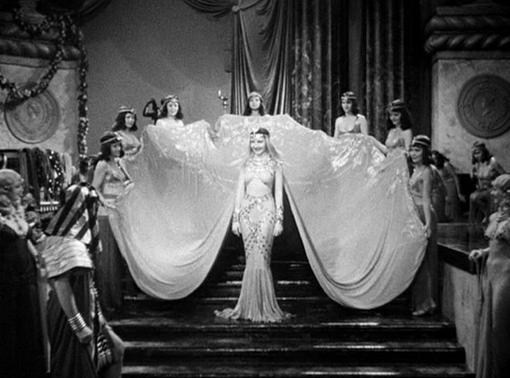 Lavish, of course, it is a Cecil B. DeMille picture, but beyond the grand scope of DeMille's historical vision is a movie that held up better than I had expected. Claudette Colbert powers Cleopatra in the title role by sheer force of personality. Her Cleopatra is manipulative, yet good-natured, and all sex appeal in every frame, surely straining the newly enforced production code.

Colbert shares the first third of the film with Warren William as Julius Caesar. William brings all of the force of his heartless pre-code businessmen to the role and is a steely Caesar, cold and focused. The leading man for the remainder of the picture is a somewhat green Henry Wilcoxon, recently arrived from England, playing Mark Antony effectively as confident Alpha male.

On WarrenWilliam.com I wrote a second Cleopatra article focused entirely on Warren William as Julius Caesar. You can read that HERE.

Most notable beyond this key trio are Ian Keith practically escaping notice as a whimpering Octavian, Caesar's nephew and Antony's brother-in-law; C. Aubrey Smith as a commanding Enobarbus, key Roman General who acts nobly throughout. Smith's presence is about all that gets Keith noticed.

Gertrude Michael is shown briefly as Caesar's wife, Calpurnia. Despite her brief time on screen she's does an effective job in gaining our empathy, first walking amongst the whispers of the Caesar-Cleopatra affair at a party she hosts. Next confronting it head-on in calming Antony's outrage against Octavian.

On the Egyptian side Irving Pichel turns in one of the few noticeable performances as Cleopatra's confidante, Apollodorus. He serves as Cleopatra's political drive in overcoming her desires, always reminding her to put Egypt first. Then there's Leonard Mudie as Pothinos, Cleopatra's enemy who has her exiled in the opening scene of Cleopatra. He's effective but, er, not around for too long.

Back to that opening scene, there's no way for it not to grab you as Egyptian chariots race across the desert, all of them ridden by men with the exception of Claudette Colbert, bound, gagged and blindfolded, her long dark hair whipping through the wind as she tries to squirm free of her bindings while slashing through the wind as they rush at breakneck speeds over the sand.

Pothinos crowns her "Queen of the Desert," leaving her for dead in the middle of nowhere with only Apollodorus for company. Abandoned by their captors Apollodorus explains the situation to Cleopatra. Pothinus is returning to ingratiate himself with Caesar; with Cleopatra out of the way, they can deal with her brother with no interference. Colbert only wants to know one thing: "How old is this Caesar?"

Apollodorus had it exactly right. Upon his return Pothinos does his best to convince Caesar that Cleopatra has fled Egypt and negotiates peace with Rome on Caesar's terms. Rome is to have one million denari, which the Egyptians flinch at, plus ten shiploads of Egyptian corn per year for the Roman unemployed. Pothinus, well aware of the Roman forces and Caesar's reputation as their leader has no choice but to agree. But they're interrupted from completely concluding this deal when a man enters bearing gifts for Caesar.

It's Appolodorus and he carries a rolled up rug which he places to the ground and unfurls to reveal a smiling, cheery Cleopatra. Pothinus' eyes nearly pop out of his head and after giving it his best to convince Caesar that this woman is just a Cleo-imposter, Caesar reads him and sends him away with a scolding. "So you would match wits with Caesar," says Cleopatra to Pothinus with a giggle. "Oh no."

Cleopatra sells Caesar on Egypt's importance by virtue of India and being a good businessman Caesar romances her in efforts to gain more land and riches. It's pretty clear she's fallen for him but nobody is convinced Caesar wants any more out of Cleopatra than her possessions. Still Caesar's Romans are in an uproar thinking Caesar is going to divorce Calpurnia, marry Cleopatra and declare himself King of the World. A couple of trouble makers work on a bearded and reluctant Brutus (Arthur Hohl) and soon enough daggers are slashing through the Senate and Warren William is done.

The Senate votes to make co-leaders of cocky Antony and sullen Octavian and they're bickering from the word go. It's decided Antony is going to head to Egypt, entice Cleopatra into his good graces with a friendly letter, and then bring her back to Rome in chains. That's when the real fun begins!

After Cleopatra doesn't show up to the agreed appointment, Mark Antony storms to her palace and is soon worn down by trivial flattery and finds himself enjoying the food, drink and love of Egypt. Highlights include Cleopatra treating him to some freshly caught clams--the net rises from the water and dumps out a pile of half-naked women who writhe across the ground to Antony's feet while holding out open clam shells filled with jewels in his direction.

Cleopatra encourages Antony to throw handfuls of the jewels across the floor so the pair can laugh at the Egyptian peasants scrambling to fill their pockets with the riches. This is broken up when out of a corner of the room comes, get ready for this, a group of women on all fours wearing leopard skins and acting like, what else, leopards. Their entrance scares away all of the fortune hunters leaving enough room for a series of catfights to break out with the leopard clad women clawing and scratching at each other and the guards who try to tame them with whips. Flaming hoops are brought out and the leopard women leap through them until the scene fades out.

Antony settles in with Cleopatra in Egypt which as you might imagine doesn't set well back in Rome where Octavian is looking to take complete control. A messenger arrives in Egypt in the form of someone I hadn't mentioned earlier, Joseph Schildkraut as King Herod. Herod, with sharp beard and narrowed eyes, is presented as a friend of both Cleopatra and Antony; however, all he does is cause trouble.

He separately informs each of them that Octavian let it be known that if Cleopatra were to poison Mark Antony, Rome would forgive her and Egypt would be saved. Antony thinks this is the most ridiculous thing he's every heard and is crippled with laughter as he marches off to tell Cleopatra the grand joke.

Soon after a murderer is brought before Cleopatra, who's to decide his mode of execution. Antony sees the man's corpse being carried away and asks the guards what's going on. "The Queen is testing poisons," he's told. Now he's a bit leery of cocktail time with Cleopatra. I won't say whether she poisons him or not, but their evening is interrupted by C. Aubrey Smith's Enobarbus presenting an ultimatum to Antony from Octavian. Antony wins Cleopatra over for good when he refuses Enobarbus' proposals and soon enough DeMille gives us a classic war scene.

Swords are forged, soldiers march and soon swords and spears are brandished in battle. The two sides come together in a violent clash and bloodied bodies are shown lifeless on the ground. Catapults hurl flaming projectiles, not just on land but at sea where the ships crumble into oblivion, soldiers are shown being pulled underwater as the rubble sinks beneath them. Chariots tumble while racing across the sand. Death is everywhere and the war is fought to it's conclusion, the Romans surrounding Antony, defiant to the bitter end.

Nominated for five Academy Awards, Cleopatra would win one for Victor Milner's Cinematography. None of the individual actors nor DeMille himself were nominated for their work on this film, but the 1935 Awards were a banner time for Colbert who won Best Actress as part of It Happened One Night's (1934) then unprecedented sweep of the four major awards.

Cleopatra's story had been brought to the screen prior to 1934, most famously in the 1917 lost production starring Theda Bara. It's also been done several times since including Vivien Leigh's performance in 1945's Caesar and Cleopatra and with Elizabeth Taylor taking the title role of the 1963 production, which I have to admit has put me to sleep a few times.

DeMille's Cleopatra won't do that! There's far too much action, pageantry and Claudette Colbert for the 1934 film to ever be considered boring.

You be Cleopatra and I'll be Antony. Note the flower in Antony's head gear

My favorite scene with Colbert came when she got the hiccups while drinking too much wine with Antony. As she fools around trying to find who's making the noise, Antony, wearing a wide grin himself, finally says, "I'm very much afraid it's the Queen of Egypt who's hiccuping." Colbert's Cleopatra fires back casually and cute with "Oh, but doesn't that seem a little absurd?" and soon enough they're in each others arms.

Henry Wilcoxon would next work in another Cecil B. DeMille film, The Crusades (1935) starring Loretta Young. Wilcoxon became associated with DeMille throughout the rest of his career, appearing in a number of titles for the legendary filmmaker and acting as associate producer on some of them as well. "I loved the old buzzard," Wilcoxon said of DeMille (Eyman 306).

Claudette Colbert's next film during her very successful 1934 would be Universal's Imitation of Life (1934) which began production almost two months after Cleopatra had completed. Her co-star in Imitation of Life would be. yes, Warren William. Meanwhile William's home studio, Warner Brothers, would squeeze both a Philo Vance and a Perry Mason out of him in between that pair of classics opposite Colbert, their only two screen appearances together.

Eyman, Scott. Empire of Dreams: The Epic Life of Cecil B. DeMille