King Kong premiered at Radio City’s Music Hall and Roxy theaters on March 2, 1933. President Roosevelt took office on Saturday, March 4. On March 6, just an hour after midnight, he announced the national bank holiday, effective immediately. Several states had previously proclaimed their own bank holidays prior to this, with New York and Illinois doing so in the overnight hours leading to the morning of March 4, inauguration day. I feel as though I may overuse the term “darkest days of the Depression,” but these are some specific events that marked the calendar around the mighty Kong’s arrival in New York’s most prestigious movie houses.

Americans had been hoarding their money in the panic and bank closures leading up to this time. Of course, if the Depression had already tapped your fortunes, there was no money to hoard. In that case when the banks closed your wealth consisted of what was in your pocket. In 1939's Since Yesterday

historian Frederick Lewis Allen described the “tingle of excitement” that swept the populace when the banks shuttered. Americans knew it was only a matter of time, but the new President had managed to inspire hope with the immediacy of his announcement and the confidence with which he made it. “You say you had thirty dollars on you when the banks closed?” Allen writes, recalling as much as imagining the types of conversations that were had. “Well, you’re in luck. I had only three-fifty—I’d planned to go to the bank that morning” (109-10).

But there was no bank to go to.

“Radio City has confidence in America and its people—until scrip becomes available our box offices will accept checks.” With no money in circulation it was believed that the issuance of scrip was inevitable. It didn’t come to that: the bank holiday extended a few days beyond original expectations to Monday, March 13, when sound banks were allowed to reopen. Scrip was printed, but not put into circulation. Instead, the Treasury Secretary used the Federal Reserve Act to print more money. The entire few days are covered with great detail on the Federal Reserve History website.

The Radio City ad shows ticket prices beginning at 35¢ for shows between 10 am and 1 pm; 55¢ from 1 pm to 6 pm; 75¢ thereafter. So Allen’s man who didn’t make it to the bank on time would have to wait for King Kong. At least if he were planning to take the family. But Radio City had no problems filling seats in the mean time.

“50,000 See ‘King Kong’ In One Day at Radio City,” Film Daily reported of the film’s March 2 premiere. And they kept coming, even after Roosevelt’s national bank holiday replaced New York’s local proclamation. On March 8 Hollywood Reporter reported just over $100,000 earned by Kong in its first six days, with the Music Hall taking in $68,814 and the Roxy, which had approximately half seating capacity, taking in the balance.

No matter how much or how little the Depression had personally touched them, each of those paying customers must have been experiencing that “tingle of excitement,” Allen wrote about. An anxiety that could have ranged from anywhere between devastating to thrilling as they waded shoulder-to-shoulder into the theater for the highly hyped King Kong. What a time to be seated for a movie unlike any ever seen before!

While that New York crowd would surely recognize Ann Darrow’s (Fay Wray) desperation when she reached for that apple, more immediately familiar would be the shudders of uncertainty and excitement Ann felt at the prospect of Carl Denham’s (Robert Armstrong) unusual proposal. The film had been completed well before the more immediate preoccupation of the bank holiday, but in Ann, here was a character who was plucked from the streets and filled with all of the same emotions many must been experiencing themselves as they watched her.

“We’re off!” Ann repeats, clasping her hands together and raising herself up on her toes, a bundle of energy, unsure of everything, except that this is better than what was. 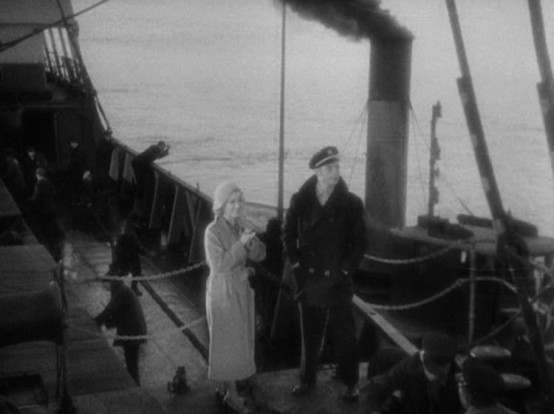 Above: Fay Wray and Bruce Cabot.

Before Denham even reveals their destination, Ann and Driscoll have had enough time together to overcome the mate’s initial reluctance to having a woman on board. They fall in love. Ann tells him, “I’ve had the happiest time of my life on this old ship,” and you can be pretty sure that still goes, even if she hadn’t fallen for the tall, handsome crew member.

If you count the unnecessary four-minute overture that’s been reinserted into the beginning of the film, it’s very nearly a half hour until the Venture spots Kong’s island. “Isn’t it exciting?” Ann says, as she joins the crew for an up close peek at the natives, who soon spot them after Denham is a bit too aggressive with his camera. Within a few more minutes the natives capture Ann and then, over forty-five minutes into the film, Kong first appears.

For the next half hour you could forget about the bank holiday or any personal troubles and invest all of your own emotion into the plight of Ann Darrow, that slight figure with the big scream, who’s terrified and terrorized while held in Kong’s clutches. There’s no dialogue between Ann and the mighty ape, just a bloodcurdling scream every so often from Ann and the occasional bit of charm from Kong, who raises his eyebrows, smiles, and fondles his new pet, when he’s not warding off even more terrifying reptilian creatures of the island.

It’s the men, including Kong, who do battle with these creatures. No civilized man may have seen them for millions of years, but these are monsters, always on the attack and killed with no remorse beyond Denham’s wish that he could bring some back alive. Denham’s a showman, not a scientist, so these fascinating creatures are nothing more than enemies to be disposed of on his path to the prey that launched him on this trip, Kong.

“He’s always been king of his world, but we’ll teach him fear,” Denham says, after Ann is safely returned to the group and her captor falls victim to Denham’s gas bombs.

Above: Robert Armstrong as Carl Denham.

When Kong explodes through the native’s barrier to wreak brief but deadly havoc before his capture, it seems realistic to believe that this is the climax of the film. At 75-80 minutes into the movie, King Kong is already longer than most other movies released during this time. It’s not unreasonable to think that Denham and company will kill the beast right there on the island, and that will be the end of King Kong. But there’s another twenty minutes to go, beginning with the unlikely appearance of Kong as Broadway attraction.

Could our anxious Radio City audience have ever experienced a greater bout of escapism than they did through what happens next? The beast is loose in their own city, among familiar sites. Perhaps the angriest members of the crowd, those who hurt the most, even fantasized about inflicting such damage and destruction. Hopefully, they were too caught up to do anything more than revel in the excitement. 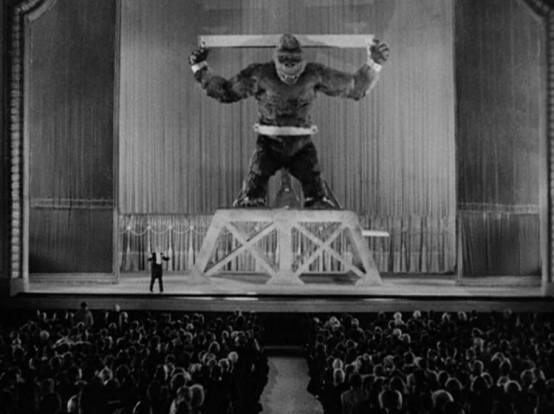 “He was a king and a god in the world he knew,” Denham says, introducing Kong to a crowd that looks a lot like the people seated before the Music Hall’s giant screen. “But now he comes to civilization merely a captive.”

Oh yeah? Old Man Depression can’t keep Kong down. Kong climbs by instinct, an instinct that makes him crave the top, for sake of strategy on one hand, dominance on the other. He’s climbing the tallest building in the world, located just several blocks from the theater we’re seated in, and he doesn’t care who’s in his path on his way to his perch. Our hearts fall when he falls, as Max Steiner’s celebrated soundtrack turns not triumphant, but sorrowful.

But King Kong’s charms were relevant well beyond both New York and March 1933. It’s still the most exciting and original, and add to that influential, adventure story that ever played. It’s filled with all of the -isms of the day: sexism, racism, nativism, colonialism, but 1933 is never going to apologize for that. It’s of my grandparents’ time, and like an old relative that you love dearly, you’re willing to overlook outdated and negative traits to cling to what makes you love them in the first place. The groundbreaking special effects are enhanced by the overall thrills and the surprisingly touching story of innocence struck down. While the acting can be spotty, the characters are spot on, and that goes for man and beast alike.

As spectacular as it still plays today, it’s hard to imagine seeing King Kong in New York, March 1933. But I gave it a try.

Above: Bruce Cabot and Frank Reicher.

This title has already been reviewed at a few other sites. I may add some more specific links later, but for now, here's the IMDb page of external links, and do have a look at ClassicMovieSearch for several from sites I hand-picked for inclusion.

King Kong is available on DVD from Turner Home Entertainment. The edition shown at the top of the page is their 2007 DVD release. The one I own is a box set that also includes sequel Son of Kong (1933) and the later Mighty Joe Young (1949). While I don’t see that exact set available, THIS one

Still One of the Best Ever

No nitpicking, my top score for one of my all-time favorite movies. The action and adventure still thrill and the effects are still mind-blowing. The story is timeless, though this review attempts to put it in a very specific time and place.