It had been a few years since I'd last caught Double Wedding so while the basic story was familiar the laugh cues had long been forgotten and the film was fresh all over again. In my view the screwiest of William Powell and Myrna Loy's pairings, Double Wedding features a Bohemian Powell, his Charlie often sporting a beret, a raccoon skin coat, even a fake beard in one scene, falling for Loy's meticulous dress shop owner Margit whose motto "One should know everything in advance and plan accordingly" covers everything from the daily breakfast menu to the minutest details of sister Irene's (Florence Rice) wedding to doormat Waldo (John Beal).

Despite the fact that Irene's pending marriage to Waldo has been arranged by her mother and micro-managed by her sister, she really does love the mope and wants to follow through. However when Waldo comes up short in rehearsing a love scene with her it leaves "Director" Charlie to step in and show him how to really make love to starry-eyed Irene in a 30's screen fashion--with plenty of yumph, as Edgar Kennedy's barkeep Spike points out--and with the yumph comes the realization by Irene that it's time for Waldo to be a bit more forceful. As Margit decides upon a date for her sister's wedding Irene suddenly pipes up and declares her love for Charlie. Margit turns on Waldo asking him how he could allow such a thing to happen, but Waldo says he "can understand it. He's got yumph," and furthermore that "to know Charlie is to love Charlie." 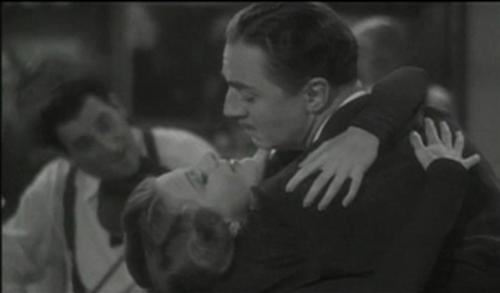 Incensed, Margit storms to Charlie's trailer the next morning to confront him about her sister's affections to which Charlie, ignorant from the get-go but immediately enchanted by Margit, plays along hoping to extend his time with Margit. Charlie tells Margit how much more beautiful she is than Irene mentioning her sense of aloofness and repression as other key character traits enhancing her beauty all the more. Margit doesn't take kindly to his familiarity and in response to her attitude Charlie physically throws her out of his camper by the scruff of her raincoat. Yet, there's no doubt, he's already in love.

Margit, slightly infatuated with Charlie despite their disagreeable meeting, puts in a call to the bar he's parked in front of and we get to see Spike summon Charlie to the phone by way of a BB gun shot to a gong Charlie leaves hanging in his trailer window. Powell is quite a sight pulling on his raccoon coat and popping open an umbrella as he journeys a couple of dozen feet from his camper into the bar under the pouring rain. Margit asks to come over and discuss Irene again suggesting 10 am as the meeting time which Charlie, already keenly aware of her passion for order, cracks back "Let's make it 10,1 (10:01)."

Charlie's painting of Margit, while Loy as Margit sits near Charlie's gong

At this meeting a settlement is made whereby Charlie is to give up Irene for three weeks in return for Margit posing for him to paint in that same time frame. It's Charlie's plan to win Margit over and Margit, who made the 10 o'clock appointment with more reason than negotiation over her sister's virtue, agrees. While her face barely betrays it she's fascinated by not only Charlie's lifestyle, but Charlie himself, and eager to get to know him better.

From here Double Wedding is about Powell's Charlie winning over Loy's Margit; Margit letting down her guard enough to realize that she loves Charlie, all the while attempting to rescue her sister from what Margit believes is Irene's impending marriage to Charlie. Connected to all this is Irene waiting for Waldo to show some backbone and Waldo doing his best to come up with one. Beal is as appropriately wooden as can be as Waldo, but gets to show better flashes later in the film as Waldo gathers some self-esteem, much of it from inside a bottle. Florence Rice as Irene does one thing very well throughout Double Wedding and that's relay moments of hope through a series of perfect sidelong glances whenever Waldo very nearly emerges from his shell.

Florence Rice in a hopeful moment for Irene

Work on Double Wedding would be halted due to the shocking death of Powell's girlfriend, Jean Harlow, June 9, 1937. Powell biographer Roger Bryant

writes that Powell returned to work after taking some time off to mourn on Ronald Colman's yacht, but then a July 17 newspaper report told of his collapse on the set of Double Wedding due to an illness directly resulting from his shock over Harlow's sudden passing. Following this Double Wedding took another break for several days after doctors ordered Powell out of town to rest (123).

Powell's terrible state is well worth noting because you're not going to find a hint of it inside the finished product. In fact Powell's performance in Double Wedding surpasses Loy's, who often appears to be struggling to maintain Margit's serious demeanor. Still, speaking in Loy's favor, this works well later in the film adding to the idea that her character is slowly breaking down her resistance to Charlie, rather than simply unmasking and revealing her love for him in the final scene.

The Mob outside of Charlie's camper

And, oh, what a final scene! Director Richard Thorpe skillfully handles a mob scene where hundreds, practically as one, move from celebrating a wedding ceremony outside of Charlie's tightly populated camper to a violence handled with a Preston Sturges-like touch of lightness. The crowd outside, highlighted by a hot dog vendor and the rag tag musicians from Spike's Place, a bar aptly described by Sidney Toler's Keough (Margit's butler slash detective) as a joint, is inspired by the even more manic doings from inside the camper where all of the main characters are gathered. The high spot inside is Loy's Margit doing battle with Edgar Kennedy's Spike, gruff owner of said joint whose been repeatedly referred to by Margit as an ape throughout Double Wedding.

Spike gets ready to give Margit's nose a twist

Jessie Ralph plays Mrs. Bly, an angel investor in Margit's dress shop whose primary motivation in backing the young entrepreneur was to lose enough money to save on her taxes. Margit's success foils this. Ralph's best moments come after a key reveal in a scene with Margit, Charlie and Keough which hilariously uncovers her nickname of "Stonewall."

Sidney Toler comes off almost as flat as Beal, but again, that's what's called for here and his practically depressed demeanor as Keough only adds some extra punch to his lines. Keough quite seriously insists he was the first G-Man and rants that he was the one who'd tracked down Dillinger on more than one occasion but he couldn't get his call through to Hoover in time to nail Public Enemy #1. Keough is also the one who first brought that fake beard I'd mentioned onto the scene using it to tail Charlie in a scene which plays right out of a Bugs Bunny cartoon. 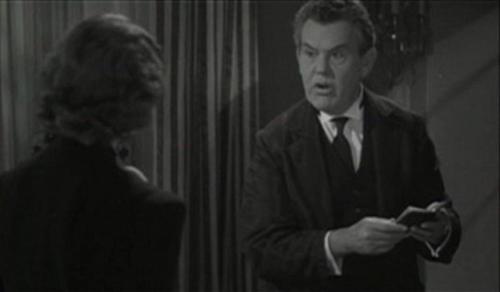 While it's easy to hang a star by almost any of Powell and Loy's 14 pairings (a count including The Senator Was Indiscreet, where Loy only has a small cameo) further reflection reveals Double Wedding deserves to rank higher in the canon just below the better Thin Man films alongside a smaller handful of their other joint works such as Libeled Lady (1936). But while the latter movie involves just as much Spencer Tracy and quite a bit of Jean Harlow, Double Wedding is pretty much all Powell and Loy with youngsters Rice and Beal in support. Double Wedding offers more comedy than all and more romance than most Powell-Loy outings with the characters, at least Powell's Charlie, placed in situations far wackier than you may be typically accustomed to.