You are here: Home / Movie Reviews / James Dunn and Claire Dodd star in The Payoff (1935)

Just that quick The Payoff becomes my new Claire Dodd favorite! How Dodd's calculating Maxine ever wound up married to honest New York sportswriter Joe McCoy (James Dunn) we'll never know, but I think we saw Joe bend his elbow just enough times to provide a clue. Their entire relationship is summed up nicely through this brief exchange:

Joe: It's getting so the fellows resent a guy trying to be ethical.

Maxine: You and your ethics. What good are they? Did you ever try and eat a nice big dish of ethics?

This is part of a conversation between the couple held while Joe is bandaged up lying in a hospital bed after taking a beating from three of Marty Bleuler's (Alan Dinehart) thugs.

Don't get me wrong, Maxine does show flashes of actually caring about her husband. When Joe's excited to fill in for the senior sportswriter covering the World Series (look close and quick, I believe we see Lou Gehrig smacking a base hit) Maxine gripes about there not being any extra pay involved. Joe placates her by saying he'll take her to any show she wants to see when he gets back from covering the game and yes, Maxine does smile, satisfied with the attention. Joe flubs this opportunity to win her good will by gassing up at the bar with the other sportswriters after the game while the clock back home swings past midnight. The result is an angry Maxine coming to collect him.

Okay, she's not yelling at her husband in this particular shot, but you don't want to mess with Maxine

When the same senior sportswriter is too ill to continue working Joe is promoted to his post and his pay doubles from $75 per week to $150. These are the kind of numbers Maxine can understand. Joe's too busy working to have any involvement but he winds up mighty impressed by the new apartment and furnishings Maxine has secured for them while he had his nose to the grind. The cost: $1,500, leaving a stunned Joe to ask her to please go a little easy on the spending for awhile. This moment inside their lavish new digs is the closest Maxine comes to being the good wife, she actually seems to understand Joe's call for thrift. Abiding the call, well that's another story.

Joe's editor, Harvey Morris (Joseph Crehan), is impressed by his job on the new column and sends him off on an expedition covering the Winter Sports Circuit beginning with the Rose Bowl in Pasadena and finishing with Baseball Spring Training in Florida. Joe gets an expense account and is allowed to take Maxine, whose initial response to his excited news is irritation: "You mean we're going to cover a lot of baseball training camps and sleep in honky tonk hotels in hick towns all winter. Well, that's very interesting." But when Maxine hears Pasadena her eyes light up at the idea of California and not only is she in, she happily dances with Joe in celebration while he sings "California, Here We Come."

Happier times for Joe and Maxine

The happiness doesn't last too long as upon their arrival California has its annual day of rain and a soaked Maxine packs up and storms back to New York on her own. This is when Joe's real troubles begin.

Connie tries to get Joe to sober up

Prior to the California trip Joe has built his reputation for honesty and ethics through his Real McCoy column heavily relying on taking swipes at renowned gambler Marty Bleuler. Apparently in the world of The Payoff Arnold Rothstein never existed because it's Bleuler who fixed the 1919 World Series and walked away with all the notoriety that the real-life Rothstein still enjoys to this day. Other than siccing those thugs on Joe and landing him in that hospital bed, an incident which Joe faithfully reports in his column upon his release, Bleuler has been somewhat powerless in bringing Joe around to his way of thinking. But when Joe returns from the Winter Circuit trip he arrives at the apartment to find Maxine hosting a party for her friends: Marty Bleuler and his gang.

Marty hooked Maxine on his roulette wheel leading to a stack of I.O.U.'s in the McCoy name as well as a very close relationship with Bleuler himself. It's made pretty clear from their first meeting that Bleuler's prime interest in Maxine is using her to eventually break Joe. When he thrusts the I.O.U.'s in Joe's face the honest sportswriter has no choice but to not only quit the daily nudges of Bleuler in his column but to even take orders from Bleuler about what makes the column. Ethics tossed aside the quality of Joe's work steeply declines and with Bleuler dating Maxine the quality of his marriage drops off a cliff as well. The only thing on the climb for Joe McCoy at this point is his alcohol intake. 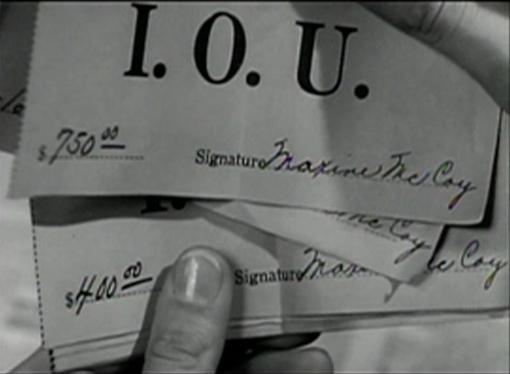 Here's how Maxine kept busy while Joe was out of town

Directed by Robert Florey for Warner Brothers and First National The Payoff is a somewhat surprising release for 1935 somehow surviving the fangs of the Production Code to include Maxine's obvious affair with Bleuler as well as Joe's growing and somewhat unresolved alcoholism. The movie had a definite pre-code feel to it thanks largely to Florey's pacing and the Warner's approach to realism. For Florey, who had a hand in Frankenstein (1931) before having to pass it over to James Whale and subsequently directing 1932's Murders in the Rue Morgue, The Payoff is one of a run of entertaining fast paced films he directed at Warner Brothers in the early and mid-1930's. I'm extremely familiar with a few of these titles because they were vehicles for Warren William: Bedside (1934), Smarty (1934), Don't Bet on Blondes (1935), the latter two also featuring Claire Dodd who had also previously appeared in Florey's Ex-Lady (1933) starring Bette Davis. All play with a similar style and pace to The Payoff. 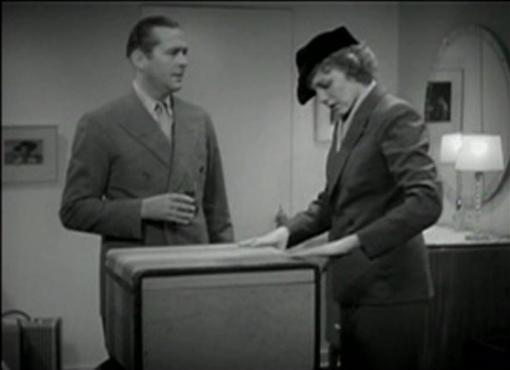 Maxine packs up after presumably one day on the West Coast, Joe protests but he's no match

James Dunn, best remembered today for playing another heavy drinker in his Oscar winning turn in support as Johnny Nolan in 1945's A Tree Grows in Brooklyn, was at this time coming off three appearances opposite Shirley Temple very early in her career. Sadly alcohol would hold Dunn back in real life as well, though he does seem to have a long record of stage and television appearances throughout the 50's and 60's before his death in 1967. Dunn is enjoyable here as the sap star of The Payoff, a film more concerned with entertainment than alcoholism. What was surely intended to be primarily the story of a newspaperman's ethics has a layer added to it by Dunn and Dodd's somehow subtly growing marital discord--I know I make Dodd seem anything but subtle, however her moods do seem to sprout from little seeds planted along the way. And while Dunn's Joe McCoy holds journalistic ethics most dear he winds up making the choice to compromise them through Dodd's Maxine, who by that point really deserved to be discarded anyway. 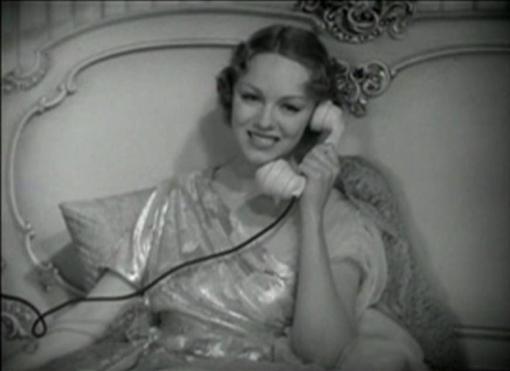 My favorite Claire Dodd scene in The Payoff, she's despicable!

Also playing a prominent part in The Payoff are Warner's regular Patricia Ellis as the lone female journalist, Connie Travers, a fellow sportswriter at the same paper as Joe who leaves no doubt to anyone but Joe as to her crush on the Real McCoy. Connie is the good girl of the picture, whom we're rooting for to wind up with Joe from almost the first time we meet her. While Ellis is only called upon to moon over the flawed Dunn character throughout most of The Payoff she does excel in her key scene with Dunn which involves Connie telling Joe off and slapping him across the face. More ridiculous is the attitude she's forced to take from Dodd when her Connie stops by to plead with Maxine for Joe's welfare. By the point of their meeting I had wanted to believe in a stronger Connie, the Connie we see smack Joe later on in the picture.

Frankie Darro gets prominent bill on the opening title cards but for most of The Payoff we're left wondering what part he's going to play. Darro's Jimmy hawks newspapers on the sidewalk and harbors dreams of becoming a jockey. The young man is an admirer of Joe's and when he finally lands his dream job mounting up on the race horses it's Darro's previously unimportant Jimmy who plays a big part in giving Joe McCoy his shot at redemption. Horse racing and gamblers, well, they don't mix, but the big scene did wind up feeling sort of tacked on, despite its importance, because of Jimmy's own lack of importance throughout.

Joe stops by to chat with Jimmy (Frankie Darro)

The Payoff is a fun, fast, imperfect mid-1930's effort typical of the Warner Brothers' output of the time. Don't be turned off by the lack of name stars, instead tune in just to be amazed by Claire Dodd and her wicked ways, the actress I've come to love to hate more than any other of the period.