You are here: Home / News - Notes / Odds and Ends: Wallace Beery Under the Stars With More to Come

Two full days have not been enough to get my Beery bio together. They could have been had I been satisfied with giving you the short version. Maybe I should have, because now I've got myself in pretty deep. 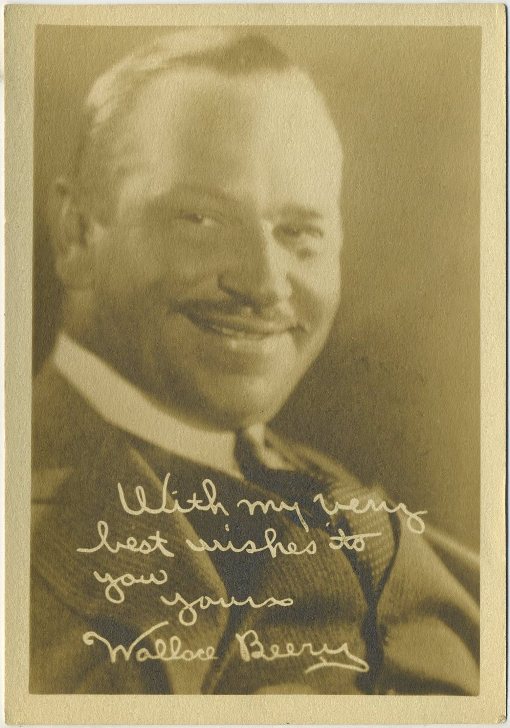 Wallace Beery had a long career. He first came to notice on the stage in 1907 and would appear in his first movie in 1913. He remained active on the screen until just prior to his death in 1949. As you might imagine this lengthy career had its ups and downs. The most notable ups came in the mid-1920s which were then eclipsed by Beery's 1930s at MGM when he was one of the most popular and highest paid stars in the world. He never played in a talkie that flopped!

Beery's talkies make up the bulk of TCM's Summer Under the Stars tribute to the actor on Saturday, August 17. You already know about the all-star classics Grand Hotel (1932 - 8 pm EST) and Dinner at Eight (1933 - 10 pm), but be sure to tune in to other major Beery talkies such as:

In addition to Ah, Wilderness! other Wallace Beery titles I have previously written about, but which do not air on TCM Saturday, include Flesh (1932) and Stablemates (1938).

I've been bogged down by over forty years of press clippings the past few days (and by the way, the Media History Digital Library's new Lantern search is an amazing help!). I've been absent on social media and if you've written I probably owe you an email. My apologies for that. I feel confident that I'm going to be able to tie together the most complete Beery biography on the web, but I don't think I'm going to be able to definitively answer any of the biggest questions about Beery, the man.

Beery's reputation off the screen has suffered greatly the past few decades. Ex-wife Gloria Swanson accused him of rape and more in her 1980 autobiography

and Beery's most familiar co-star, Jackie Cooper, had nothing nice to say about his on-screen pal in his own book

, published a year after Swanson's. Mickey Rooney liked him all right and Louise Brooks had kind words, but they seem to be in the minority. And I'm very glad somebody else did the work on this. Beery's reputation currently falls somewhere between unpleasant and monstrous.

While the guy certainly appears far from a sweetheart, I'm currently leaning towards the lighter side of that scale. After all, anyone whose funeral is attended by thousands couldn't have been all bad.

But more about all of that in the coming days. I'm shooting to have this finished up by Monday morning. Possibly Tuesday. I'm pretty far along, but timing is really going to come down to how far these last few loose ends can take me.

Beery's story has all but preempted my Summer Under the Stars celebration, though I'd still really like to have something for you by Hattie McDaniel day on the 20th and am making plans to get my hands dirty for Charles Coburn day on the 24th. We'll see, playing it by ear for now.

Enjoy Wallace Beery on TCM today and be sure to check out what other film bloggers are talking about at the Summer Under the Stars Blogathon at Sittin' On a Backyard Fence and ScribeHard on Film.

I received an email from my friend Alan Mowbray, Jr. the other day informing me that this Sunday, August 18th marks 107 years since the birth of his father, the popular character actor Alan Mowbray.

To celebrate I wanted to point back to my review of Alan's book Up from Central Park: Scenes From an Actor’s Life and the biographical post submitted to the site by Alan, Jr. about his dad shortly thereafter.

Finally, be sure to visit Alan Mowbray, Jr.'s own website to learn what he's up to himself these days.

Alan Mowbray with Mickey Rooney in A Yank at Eton (1942)

Back to Beery for me. I'll be ready to share very soon!

Have a great weekend and thanks for reading,
Cliff