It’s Independence Day here in the U.S. and I started celebrating a little early. Sober, I swear! I just decided to get a little jump on Turner Classic Movies’ celebration and watch one of the movies that they’re airing on Thursday a few hours early.

I’d recommended MGM’s adaptation of Eugene O’Neill’s Ah, Wilderness! in my July TCM Preview (July 4, 10:45 pm EST) and soon after posting I realized it’d been a few years since I watched it myself. I couldn’t remember how much of the Clarence Brown film actually took place on July 4th, nor could I recall what bearing the holiday had on the movie. About one third of Ah, Wilderness! is set on the date itself, but a good portion of O’Neill’s “comedy of recollection” also deals with Independence of a more general and personal kind.

The story centers on Eric Linden’s Richard, a bit of a smarty-pants (”I was born a hundred years before my time”), said to be based a little upon O’Neill himself. Richard graduates his small town class of 1906 and is set to move on to Yale, where hopefully all of that hoity-toity knowledge he’s been accumulating can find some order. In the meantime—and youth assumes forevermore—he moons over neighbor-girl Muriel, who as played by Cecilia Parker responds to him with the perfect amount of wonder and understated wit (”I was born ten days ahead of mine.”). 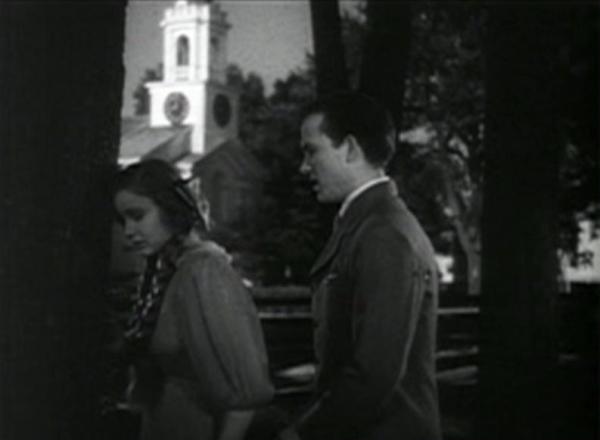 Cecilia Parker and Eric Linden as Muriel and Richard

Richard has a burning literary passion for Muriel that stretches too far for its day in their small town. He’s come of age and is dying for a kiss, expressing his frustration through racy quotations from Wilde and Swinburne, which eventually cause Muriel’s father (Charley Grapewin) to force a halt to any relations between the two. Richard responds just as his Uncle Sid (Wallace Beery) would: By going out on a jag and getting too friendly with a woman of unquestionably bad reputation.

Beery’s Sid had made his mistake eighteen years ago when he took up with what Lily (Aline MacMahon) refers to as a “bad woman.”

Ever since Lily has turned down Sid’s proposals and Sid has worsened matters by trying to drink away his disappointment. Sid is, at least, a happy drunk. After he stumbles home on the night of the Fourth, he entertains the entire family at dinner. Even Lily is laughing at his antics. But once Sid has dished out all he has to give and excuses himself to bed, Lily scolds herself and the family: “That’s been his downfall, everyone always laughing at him … we’re all responsible, we’re all to blame. All we do is laugh.” 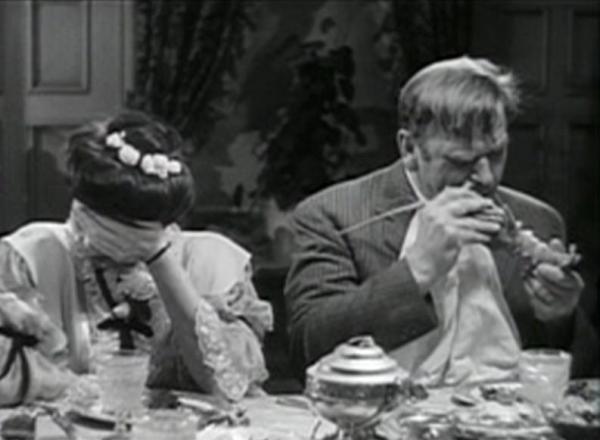 When word later reaches Richard's father, Nat (Lionel Barrymore), at his newspaper about his son’s bender at the town dive, it’s Sid, back to work for his brother-in-law because he couldn’t stay sober elsewhere, who says, “It only takes one thing like that to ruin your whole life.” Unless Richard can make sense of his passions, physically and intellectually, the tragedy of Sid and Lily may be doomed to repeat itself between youngsters Richard and Muriel.

While Wallace Beery earns his top billing by excelling in his every scene, drunk or sober, Eric Linden’s Richard is the focus of Ah, Wilderness! But Richard’s quest, for love, manhood and independence, is colored by his town and time and, mostly, his family, loving and dysfunctional. The scene at the dinner table on the night of July 4th, featuring Beery drunk and Barrymore kvetching about bluefish, brought to mind an entirely different dysfunctional family Lionel Barrymore headed just a few years later in You Can’t Take It With You (1938).

Despite offering a fine overall bit of Americana, TCM certainly had one scene in mind when it chose to air Ah, Wilderness! on the Fourth of July.

We know this morning is the Fourth as soon as the quiet is shattered by the excited children on the block. Mickey Rooney as Richard’s younger brother, Tommy, is at the forefront of the outrageous celebration.

As soon as the first firecracker is set off, the quiet New England block turns into a complete war zone with small children lighting off whole packets of fireworks at once, single firecrackers that are so tall they resemble dynamite, and--well, you won’t be seeing this in any American neighborhood come Thursday morning:

Then bursting through the smoke comes a ragged mutt, who’ll surely make you wonder over any ASPCA involvement once you spot the sparklers and light explosives tied to his tail.

The wild scene wakes up Nat, who complains to wife Essie (Spring Byington), “Ought to have more sense then to let kids shoot off things like that in the middle of the night.” Essie, more energetic this time of the morning than her husband, makes her way to the window as Nat adds, “It’s the parent’s fault, let ‘em do things like that.” Essie turns and says, “It’s Tommy!” That gets Nat out of bed. He opens the window to scold his son and a rocket shoots inside the house past him.

Wishing you a safe and Happy Independence Day! Hopefully far safer and quite a bit lighter than those celebrated in Ah, Wilderness!

If you miss Ah, Wilderness! on TCM you can always pick up the Warner Archive Made to Order DVD-R release. Many thanks if you purchase through my Amazon affiliate link