Lana Turner famously burst on the scene in twelve brief minutes at the beginning Mervyn LeRoy’s They Won’t Forget for Warner Brothers in the Fall of 1937.

Her character Mary Clay is quickly disposed of, yet she is never far from our thoughts as the rest of the movie concerns the aftermath of her murder. While we are never really positive who killed Lana’s Mary Clay it doesn’t matter, because They Won’t Forget isn’t a murder mystery.

Many motivations are at work among the characters of They Won’t Forget in the wake of this murder in a small Southern town. At the end of the movie Sybil Hale (Gloria Dickson) names the desire for vengeance on the part of Mary's brothers as the purest of the forces against her husband. That desire also leads to the local groundswell of contempt for Robert Hale (Edward Norris) on the part of the Clays' friends and neighbors.

The ugliest motivation for condemning Robert Hale comes courtesy of Andy Griffin (Claude Rains), a local prosecutor on a personal quest for power in politics. Griffin needs a big case to aid him towards his ambition and is relieved to find evidence pointing to Hale rather than the unfortunate janitor who found Mary’s body: “Any fool can ride to glory on a helpless Negro janitor. I’m out for bigger game,” Griffin tells the almost equally ambitious reporter (Allyn Joslyn) who helps blow up the Clay murder to a national news story pitting North vs. South.

One of the best aspects of They Won’t Forget is that despite all of the evidence against Hale being circumstantial, there's every likelihood that he did commit this murder. We root against the bloodthirsty Griffin whose only interest in convicting Hale is his own personal advancement and we watch with horror as the Clay brothers rouse the town to mob justice because their actions turn barbaric. There are no witnesses, but all of the evidence points to Robert Hale.

We first meet Lana's Mary gushing over Hale, her shorthand instructor at the business college. Her faulty work attracts Hale’s attention as Mary very likely planned. Class is soon disrupted by Mr. Buxton himself (E. Alyn Warren), founder of the school, who stops by to ridicule transplanted northerner Hale over his ignorance of Memorial Day, a half-day local holiday honoring the Confederate dead. All of the girls except Mary laugh at Hale, who cannot hide his embarrassment over being the object of their ridicule.

We follow Mary and her friend to the soda shop where Mary discusses meeting her date and fends off the flirtatious soda jerk.

“Make mine a chocolate malted and drop an egg in as fresh as you are,” she replies to his come-on, giving Lana Turner her best line of the movie.

It’s hard to watch the scene today and not think of Lana Turner’s origin story. It was January 1936 when Hollywood Reporter journalist Billy Wilkerson spotted her at the Top Hat Malt Shop (or Currie’s Candy and Cigar Store according to Jeanine Basinger in The Star Machine

) and soon had her signed with agent Zeppo Marx. Was director Mervyn LeRoy winking to us when he set Lana out to be discovered by the whole world in the same setting?

In any case, the entire world was allowed to discover Lana Turner on the screen in the same way that legend says Hollywood itself discovered her for it.

But what of that sweater? In late 1940 Life remembered the first time they saw Lana Turner:

”That scene consisted mostly of a 75-ft. dolly shot of her as she hurried along a crowded street in a small Southern town. Lana didn’t have to act, she just walked along wearing a tight-fitting sweater. There was nothing prurient about the shot but the male U.S. found it more stimulating than a year’s quote of chorus girls dancing in wampum loin cloths.”

You can’t blame them, it was exactly what Mervyn LeRoy was going for. Lana Turner was just 16, but Mary Clay, who was in business college, not high school, would have been a little older. Before she left that soda shop to retrieve her forgotten vanity Mary was just a flirty young Southern belle. Once she stands and walks away from the counter Lana Turner comes of age before her time.

She bumps into Buxton on her way up the school steps. He comes across as a bit creepy, but walks the other way when Mary goes into the school.

The janitor, Tump Redwine (Clinton Rosemond), hears her enter, but Mary is on her up the stairs before he can offer her a ride in his elevator.

In the classroom Mary finds her compact and is tidying her make-up when the door to the classroom creaks. She’s expressionless. As a shadow comes in to partial view Mary begins to look concerned. There's menace in that shadow and so we're concerned with her. The door creaks again and then taps are soon blown as the scene switches back to the Memorial Day celebration.

While Lana Turner's appearance has become the most celebrated element of They Won't Forget it is a very worthwhile film in its own right. The best performance is actually given by Gloria Dickson, in her screen debut, as Sybil Hale, wife of the accused.

Despite the now famed sweater scene Lana Turner didn't get much of an opportunity to catch on with Warner Brothers. When Mervyn LeRoy left for MGM Jack Warner let him take Lana with him. Soon she was vamping Andy Hardy and after that being turned into the latest, and one of the all-time greatest, Hollywood sex symbols.

Enjoy Lana Turner on TCM today and be sure to check out what other film bloggers are talking about at the Summer Under the Stars Blogathon at Sittin' On a Backyard Fence and ScribeHard on Film.

Early article found in the February 22, 1937 edition of the Ogden Standard Examiner, page 7. 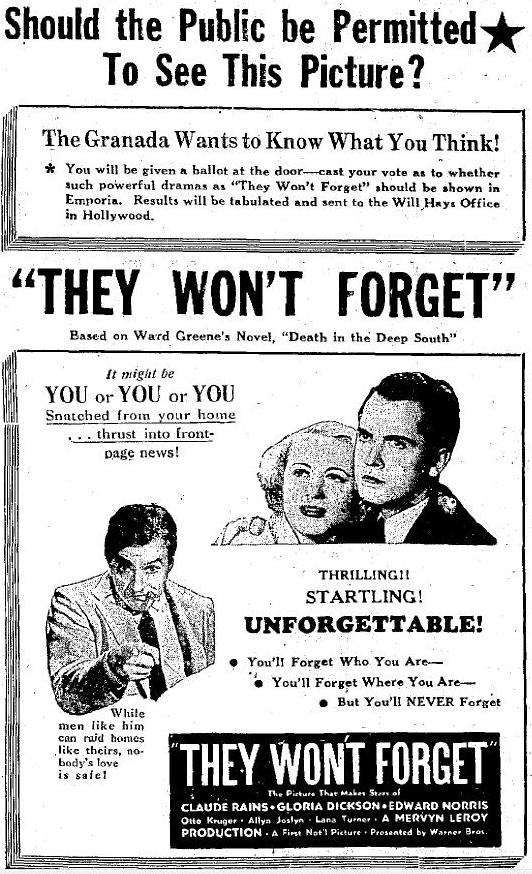