You are here: Home / News - Notes / The Buster Keaton Show Comes to KTTV in 1949, the October 4 Immortal Archives

Everything Immortal for October 4 ...

... in 1895 was the great Buster Keaton! As Keaton has been covered from every imaginable angle I tried to find something at least a little different.

I usually like to start at the beginning, looking at how things started out like in the Groucho Marx post from a couple of days ago. And while "The Three Keatons" would have made an intriguing article, it would have been weeks before I could produce a finished post!

Instead, Keaton's career had so many ups and downs, I went looking around the old papers for one of the bumps in between. We'll look at this slice in time under the following image, a 1930's era card issued with chocolates in Spain:

It was covered with excitement by the papers late in 1949. "Buster Keaton Quits Movies for Television" stated the headline on on United Press report.

One thing I noticed in narrowing down my search for Keaton topics was that no matter the decade: 1930s straight through to the 60's, every Keaton comeback was well publicized, highly anticipated with reporters and columnists thrilled to reintroduce the fellow your parents, and later grandparents, found so funny.

One article claims that a recent dose of Keaton exposure actually moved up the debut of The Buster Keaton Show on KTTV in Los Angeles. Keaton had just gotten over twice, first as guest on Ed Wynn's television show and next as the "Mystery Voice" on the radio show of the same name.

The Buster Keaton Show was said to be expensive but was KTTV's attempt to create programming featuring Hollywood based talent that they could then syndicate nationwide ("Premiere Thursday").

Keaton was excited by a return to his roots: "One reason I stopped making movies then was because there were too many cooks in the kitchen." He continued, "In the old days only three of us made my movies. Any more people and it's poison" ("Buster Keaton Quits").

Keaton says that by 1935 MGM was pretty big and while the cooks on hand were geniuses such as Thalberg and Mayer, "each had a different idea about what was funny."

"On television I can go back to creating my own show. Only three of us are working on it."

Keaton said that his type of humor was through on the big screen--everybody talks for laughs. "And on future shows I kill dialogue whenever I can," said Keaton. "I don't go out of my way to talk."

The live show aired on KTTV on Thursday nights, 9:00-9:30 pm. For how long I do not know. By 1950 a second Buster Keaton Show appeared that was filmed and nationally syndicated. Sounds like what KTTV originally had wanted to do.

While the two Buster Keaton Shows were the only series Keaton had of his own, he was a regular on television sketch shows and anthologies throughout the remainder of the 1950s right through the mid-60s. In 1961 he was featured in a very enjoyable episode of The Twilight Zone, "Once Upon a Time."

... born on October 4 ... another slapstick star, Jimmie Adams, in 1888. Adams appeared on screen from 1918 until his death in 1933; actor Robert Shayne in 1900, who had parts in Warner Brothers films of the '40s such as Mr. Skeffington (1944) and Christmas in Connecticut (1945), but is best recalled as Inspector Henderson on TV's Adventures of Superman; screen legend Charlton Heston was born this date in 1923.

Actress Felicia Farr celebrates her 80th birthday today. Farr gave Glenn Ford pause as barmaid Emmy in 3:10 to Yuma (1957) and was the real life wife of the late Jack Lemmon, whom she married in 1962 and widowed in 2001.

I'm split between Tyrone Power in Son of Fury (1942) at 8 pm EST or Honky Tonk (1941) starring Clark Gable and Lana Turner later at 11:30 pm. Both are pure entertainment, though the Power movie is a little better on the whole. Tough to beat Gable's charisma in Honky Tonk though, the film really shows off his screen persona well!

Power and Tierney far outpace Gable and Turner when it comes to sex appeal among tonight's TCM choices ... no mean feat, but the proof is in the photo!

Another title previously covered on the site that airs on TCM today is Cass Timberlane (1947) at 12:15 this afternoon. It stars Spencer Tracy (and airs again on the 29th) but it's another featuring Lana Turner who I thought was especially impressive.

I've got some cheapies ending on eBay tonight.

Most of these have some condition issues, but are typically sharp cards on the whole with just a crease or a spot of soiling here or there. All flaws described and pictured in the listings. The bigger stars in better shape start at just $1.99-$2.99 with the exception of the Laurel and Hardy card, opening at $9.99.

Shipping combined as per usual--so if you were to steal all of my 99¢ cards they'd ship in the same envelope for the same $1.79 (domestic) shipping fee that you'd pay for one. It's a good day to start your collection! 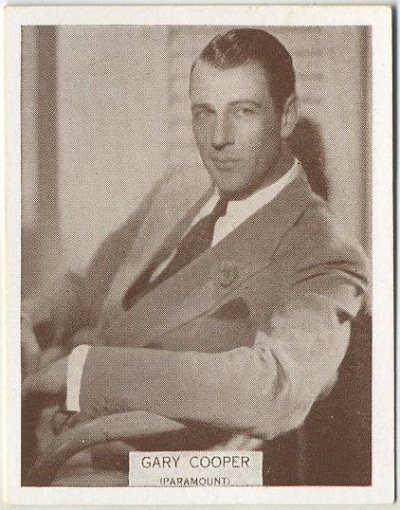 Sources for the Buster Keaton piece at the top of the page follow below.

There will be no edition of the Immortal Archives tomorrow as I try to finish up an article about an old movie that I've been working on. If I can finish it by daybreak you'll see it tomorrow morning, otherwise it will have to wait til the weekend!