You are here: Home / Archives for Notes & Quotes / Research 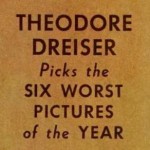 Dreiser finds Hollywood home of “the cheap sex story,” and berates it for having a “head as empty as its purse is full” in a January 1932 article from New Movie Magazine.

Notes from the article “RCA and Farnsworth in a Patent Exchange; NBC Plans ‘Big Push,'” Motion Picture Herald, October 7, 1939, 41. According to Alfred H. Morton, Vice-President of NBC in charge of television, there were 1,200 television sets in the New York area as of publication in October 1939. When NBC began its television […]

Local girl Myrna Loy featured in a Helena, Montana, newspaper article from 1926, plus some other old Loy clippings and pre-Thin Man biography and information.