Born Margherita Evans in New York, July 1, 1909, she’d have fame and fortune as soon as the next decade as Baby Madge, film star and namesake to a children’s hat company, before growing up to become that rare child star who found success in adulthood.  Despite that success Madge Evans would leave the movies for good before her 30th birthday, settling into a long and happy marriage to Pulitzer Prize Winning playwright Sidney Kingsley.  After her marriage she’d return to the stage once, in a play written by her husband, and make several early television appearances before leaving the public eye once and for all in 1956, after which she lived another 25, apparently quiet, years.

Said Madge in a 1936 article credited to her in Screen & Radio Weekly, “I am supposed to be completely normal.  I am the Typical American Girl.  I became a Typical American Girl by accident—the accident of a few early picture parts depicting her … That’s my role and I’m stuck with it.  Maybe I’d like to be known as a mysterious silent woman, a provocative creature of languor and possible secret sorrows.  Nobody cares.  Maybe I’ve all the instincts of a madcap.  Who would believe it?”

Hopefully Madge Evans was able to be whomever she wanted to be, Typical American Girl or not, in her time away from the limelight.

Baby Madge was modeling for painters before she was even a year old.  She’s often referenced as the model for Fairy Soap in the early 1910’s and her Wikipedia page mentions a circa 1911 ad for Anheuser-Busch.  She was on stage making $150 per week by 1914 appearing in Louis N. Parker’s The Highway of Life, based on Dickens’ David Copperfield—ironic in that Evans would play lovelorn Agnes in MGM’s 1935 production of David Copperfield.  That same year Baby Madge made her film debut in The Sign of the Cross starring William Farnum.

The IMDb credits Madge Evans as appearing in over 35 films (though no mention of The Sign of the Cross) between 1914 and 1921, by which time she was entering the awkward adolescent years.  A piece appearing in the November 22, 1919 edition of Motion Picture News gives a good idea of the magnitude of young Evans’ stardom when Prizma Natural Color Pictures took over her contract from World Pictures:

It is with a great deal of pride that Prizma makes this announcement that they have secured Madge Evans as their star.  They did not make this selection until after they had scoured the field for possible talent who combined reputation as an actress and an established following together with youth, beauty, grace and charm.  Another factor that entered into the selection was the future possibility of the star they decided to take to make Prizma natural color pictures in combination with photo play dramas.

The Motion Picture News article also mentions another fact which will become more interesting in later years, that Madge found success in the 1917 stage adaptation of Peter Ibbetson starring the Barrymore brothers.  Of course in Grand Hotel (1933) Madge’s Paula Jordan was the daughter of Oliver, played by Lionel Barrymore, and lover of Larry Renault, played by John.

Time Magazine refers to Madge’s appearance opposite Richard Barthelmess in 1924’s Classmates as a comeback, but it didn’t put her over so she returned to Broadway where she appeared in a handful of plays between 1926-1930, none of which ran for under 80 performances.  She started out playing the daughter in 1926’s Daisy Mayme; then under her Grand Hotel mother, Billie Burke, in The Marquise, a 1927 Noel Coward costume drama set in the 18th Century; a 1928 revival of W. Somerset Maugham’s Our Betters; and finally the 1931 comedy Philip Goes Forth, referred to by Playbill as a near-hit, and the performance which landed Evans a contract with MGM.

Prior to heading West with MGM Evans did make her return to film on the East Coast in a number of 1930 Warner Brothers Vitaphone shorts which more generally were an interesting project undertaken towards the development of talkies in these early days of sound.

She plays opposite Ramon Novarro in her MGM debut, Son of India (1931) and shows up next opposite another MGM newbie, Clark Gable in Sporting Blood of that same year.  She’s teamed with Ina Claire and Joan Blondell in Goldwyn’s The Greeks Had a Word for Them in 1932 before having what at least is in retrospect her big year in 1933 when she appeared in nine films altogether including the strange Al Jolson Depression comedy Hallelujah, I’m a Bum with its rhyming dialogue; she seems flat as the reform school nurse Miss Griffith in Warner Brothers The Mayor of Hell, though that may only be because the star James Cagney, as usual, is so full of life; as the Jordan’s daughter in Dinner at Eight, which is the best I’ve seen her perform; and as the lead in Beauty for Sale which Mick LaSalle calls her “best starring vehicle” in the first of his pre-code surveys, Complicated Women

Her role in David Copperfield (1935) is small, but then so is everybody else’s, still, not a personal favorite.  You’ll see her from time to time as one of the women at one end of The Tunnel in wonderfully original but depressingly flat 1935 science-fiction film starring Richard Dix; she’s in Columbia’s 1936 Pennies from Heaven, best-remembered for co-star Bing Crosby’s singing the title tune today.

Madge Evans’ MGM contract expired in 1937 after which she made two last pictures the following year, returned to New York to appear in Eddie Dowling’s Here Come the Clowns at the Booth Theater, before marrying  the playwright Sidney Kingsley in 1939 and settling down to help him with his research.  Kingsley had won the Pulitzer Prize for his first work, 1933’s Men in White, and also wrote the original stage versions of Dead End (1935) and Detective Story (1949), both of which would be adapted into popular films.  In between he penned the drama The Patriots, a hit largely featuring Thomas Jefferson and Alexander Hamilton locked in debate, and also saw Madge Evans return to Broadway for the final time in 1943. 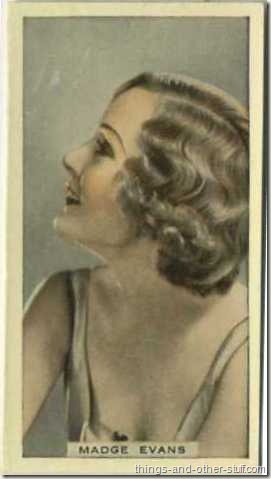 While Evans is quoted as wishing to concentrate on being Kingsley’s wife over further pursuing her career I’m sure it was the nearness and the lure of an easy pay check offered by the television studios in her native New York which led to her appearing as a guest in several shows through 1956.  Evans pre-deceased Kingsley by nearly 14 years dying of cancer at age 71, April 26, 1981, in the Oakland, New Jersey home she’d shared with him since their marriage in 1939.

Once again, from the July 7, 1936 Screen & Radio Weekly article by Madge Evans:

Well, I’ve just about decided to try once more turning a cold shoulder to tears, before I give myself up and become typically American for all time.  I don’t want to be a pal.  I don’t want to be a sort of female George M. Cohan.  I want to get me a long jade green cigarette holder, drooping eyelids, and drooling earrings and a personality to match.

Gee, it’s tough to be normal in Hollywood!

Check for availability: Madge Evans in my eBay Store

The best of several sources I found for biographical information cited above was Past and Promise: Lives of New Jersey Women 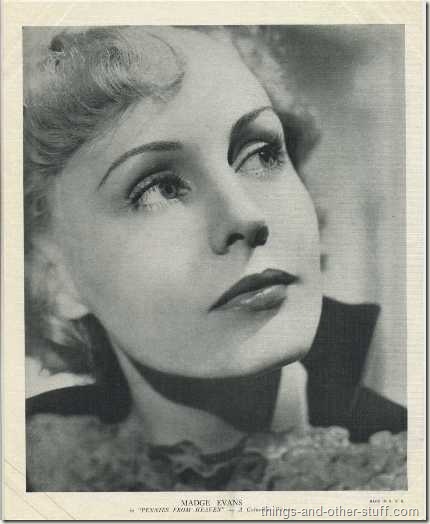