Peter Biskind transcribed and edited a series of recorded conversations between Orson Welles and Henry Jaglom into book form for My Lunches with Orson, out this month from Metropolitan Books, a Henry Holt and Company imprint. These conversations took place during the last few of years of Welles’ life, 1983-1985, at Ma Maison restaurant in West Hollywood, where Welles dined regularly with Jaglom, a filmmaker twenty-three years his junior. Biskind opens with a a well-written 25-page introduction providing the biographical highlights of our dining partners and information about how these recordings came to be.

Welles was not only fully aware of his being recorded, but it was at his request that Jaglom, who had previously recorded his own father’s memories for perpetuity, began taping their talks. The conversations that make up the bulk of My Lunches with Orson are certainly frank. While they occasionally border on trashy, a description especially fitting of the chapter headings, which make use of the juiciest of Welles’ quotes (”Everybody should be bigoted.” and ”Thalberg was Satan!” being just the first two), they are, in context, more opinionated than anything else.

Welles rips Joan Fontaine, whose Jane Eyre performance didn’t please him (”She’s no good in it”), then takes a bite out of sister Olivia too (”Neither … could act. I never understood their careers.”). He finds the work of studio directors “unwatchable” and calls special attention to his distaste for Josef von Sternberg and Howard Hawks. John Ford is his favorite, but The Searchers “is terrible” and while he likes the early work could “never understand the cult of Hitchcock.” On Powell and Pressburger: “Hated those guys.” The films, not the men, just to be clear.

Welles even manages to rip Gavin McLeod when The Love Boat becomes a topic, though he makes a point of praising one of McLeod’s Mary Tyler Moore co-stars, even if he can’t pull out Ed Asner’s name for himself.

But it’s not all negative and very little of what is comes across as truly meanspirited. It’s just one man’s opinion the way you might rail against your own least favorite actor or trash a classic movie that just didn’t connect with you. Of course, this one man happens to be Orson Welles, so the opinion carries a bit more weight when combined with his memories, talent and resulting perspective.

But that opinion is just lunchtime seasoning for the larger topic at hand, Welles’ inability to gain the necessary combination of financial backing and creative independence to make what he hopes will be his next few films.

With Welles completely aware of his being recorded it is easy to believe that this great storyteller, this concocter of hoaxes from “The War of the Worlds” on radio to F for Fake (1973) in theaters, is heaping it on some to make his conversation even more colorful than it usually was. And maybe he does sometimes. By the same token I could imagine Welles shrivel if he were around today to read of his mounting financial desperation, especially towards the end of our lunches when he practically raves over his old partner and worst enemy, John Houseman, getting paid big dollars for television commercials when Welles himself can’t even seem to sniff an offer for one anymore.

And while, just to balance the scales some, Welles does praise It’s a Wonderful Life (”hokey … but you cannot resist it!”); some Hitchcock (”Oh, my God, what a masterpiece” regarding The 39 Steps); Gary Cooper (”Gary Cooper turns me right into a girl,” also one of those chapter headings); and his hero of youth, Lon Chaney, (”I still see Lon Chaney as I saw him when I was eight years old.”), the best nuggets of My Lunches with Orson are the more general pearls of wisdom that Welles seems to inject into every conversation. 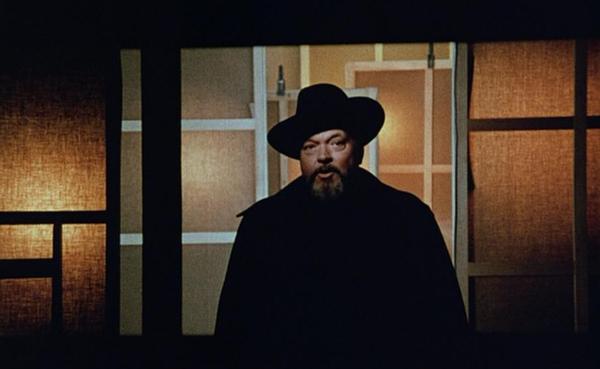 In continuing his praise of Cooper, Welles admits that along with Jaglom’s favorite, Bogart, “Neither one of them were much good,” but then elaborates upon the idea of stars as opposed to actors:

“That’s the thing about a movie star. We really don’t judge them as actors. They’re the creatures that we fell in love with at a certain time. And that has to do with who we want to have as our heroes. It’s absolutely impossible to have a serious critical discussion about enthusiasms for movie stars. Because a movie star is an animal separate from acting. Sometimes, he or she is a great actor. Sometimes a third-rate one. But the star is something that you fall in love with …” (201).

Discussing (again) F for Fake flopping in America and, on a larger scale, what he perceives as the minimally acceptable amount of success for a film:

“We don’t agree, you see. Essentially, I don’t believe in a film that isn’t a commercial success. Film is a popular art form. It has to have at least the kind of success that European and early Woody Allen movies had. People should be in those tiny theaters, lining up to see it. And they didn’t do it with F for Fake” (276).

On biographies, after he had read a pair about two writers he’s long admired, Isak Dinesen and Robert Graves:

“But I learned a lot of things about him (Graves) I didn’t want to know. If you do the warts, the warts are gonna look bigger than they were in life. If these people were my friends, the warts wouldn’t be as important to me as they seem in the book. We all have people that we know are drunks, or dopeheads or have bad tempers or whatever, and they’re still our friends, you know? But in a book you focus on it” (101).

The genius, the warmth, the outrageousness, the likes and dislikes of Orson Welles are presented to us in a casual setting. Peter Biskind does admit to having “taken occasional liberties with the text—adding or subtracting phrases, smoothing out syntax—for the purpose of making the conversations more concise and intelligible.” I’m okay with that, as it's still the Welles voice that penetrates.

Sometimes Welles’ words will make you uncomfortable and those are the warts that will be recalled, rehashed and remembered from My Lunches with Orson. Biskind provides future writers with opportunity and value in publishing Welles’ words, many of which are destined for further quotation. Hopefully that will happen more often in the proper spirit than out of context.

on The Dick Cavett Show. Looking completely at home, so much so that he tried turning the interview on Cavett, Welles charmed with his stories, even if the best ones were likely a little exaggerated. Charm, wit and intelligence overflowed during that program with Cavett even remarking towards the end, “I can’t get a pretentious answer out of you.” I had loved his movies for a long time; ever since my bastardized Madacy Entertainment two-packs on ‘80s VHS. But Welles’ conversation with Cavett allowed the great man to evolve into a human being in my eyes. This was I guy I would have loved to have had a few drinks with!

Well, how about lunch? Now that I’ve been allowed to be a fly on the wall during Welles’ conversations with Henry Jaglom, I only wish there was more. My Lunches with Orson is a nonstop page-turner that far surpassed expectations.

But if Welles winds up rubbing you the wrong way, I’ll point you to page 107, as talk returns from a tangental point or two towards the idea of biography and confessionals, specifically regarding Jaglom's perception of F for Fake. Welles winds up telling Jaglom, “I’m not interested in the artist; I’m interested in his work. And the more he reveals, the less I like it.”

Did he wink at Jaglom’s tape recorder or had he forgotten it was there? Surely, Orson Welles would have enjoyed that bit of irony, either way.

My thanks to Henry Holt and Company / Metropolitan Books for providing a copy of Peter Biskind’s 'My Lunches with Orson' for review.

For other recent reviews of 'My Lunches with Orson' see KC’s piece at Classic Movies and Rick’s at the Classic Film and TV Cafe.

Many thanks in advance to those of you picking up My Lunches with Orson: Conversations between Henry Jaglom and Orson Welles

or the Dick Cavett set mentioned above through my Amazon.com affiliate links.