Well, it took me long enough. It was the author's fault as much as my own. I had read a little about John Wayne before, but otherwise my own experiences with the Three Bad Men that Scott Allen Nollen has written about had been confined to to the movies I'd seen. Nollen’s book overwhelmed me with new information to digest and even enhanced a few of the movies I'd already seen.

At times there seems to be an over-reliance on a few previously published books, most notably: Joseph McBride’s Searching for John Ford: A Life; John Wayne: American by Randy Roberts and James S. Olson; and Pappy: The Life of John Ford by Ford’s grandson, Dan Ford; along with the autobiographies of Maureen O’Hara, Harry Carey, Jr. and, later in the book, Woody Strode. In the case of the first biographies mentioned Nollen acknowledges jobs well done and cites them for further emphasis of his own points or to occasionally counterpoint. Quotes by Ford’s three former actors and his grandson are expertly woven into the narrative so that someone not familiar with the books would almost believe Nollen had interviewed them himself (all such material is credited throughout).

Those Nollen did interview at one time or another over the course of his writing career include Frankie Avalon, Anna Lee and Henry Brandon, the latter best recalled as “Scar” in The Searchers if the name doesn’t ring a bell. A lifelong interest in his subject gave Nollen the opportunity to ask the right questions when he got a hold of these personalities, over twenty years ago in the case of the deceased Lee and Brandon. Nollen also had access to original correspondence either to or from each of his three bad men, including some fascinating letters that young Ward Bond wrote to his parents. Those really helped to color Bond’s early Hollywood biography.

One of the most impressive elements of Three Bad Men is Nollen’s familiarity with every film he discusses. For any title mentioned we get at least an honest critical evaluation and often a little opinion too, all expressed eloquently yet in language that any film fan can understand.

I do want to give a quick mention to the physical product itself, especially for those of you unfamiliar McFarland’s with output and wondering what $49.95 is going to get you. It’s a 408 page paperback, yes, but this is a trade paperback with McFarland’s typically wide margins and typography slightly smaller than the norm (keep reading glasses handy!). That’s part of what took me so long—in another publisher’s hands this book could have easily been double the length! The photographs throughout, many of which are rare and from the author’s personal collection, reproduce in a very lush black & white. On top of that the construction is good: my review copy is dog-eared and banged up, but the binding still holds strong. Would I prefer an 800-page hardcover book if I was going to spend fifty bucks? Sure, but the meat inside this package is just as choice.

The highlight is the biography of Ward Bond that is interwoven throughout the book. The picture we get of Bond is of a loudmouth and braggart who often drank too much and would have been more popular had he kept his politics to himself. While it’d be overstating the case to say everyone loved him despite his flaws, it is certain that Wayne and Ford did, along with several others. Those who didn’t care for the man personally were still able to work with him and often commented on Bond’s work ethic.

While Bond is the star of Three Bad Men, John Ford is its central force. Had to be. And so the story of all three men is strung through “Pappy” and Nollen goes into his greatest detail about the films that they were all a part of together. But their other work is covered as well with, for example, the later portion of the book giving way to coverage of a good number of Wagon Train episodes, teasing this reader with an impressive array of guest appearances and solid overall episodes. I haven’t seen the show, but now I’d like to give it a try, at least the Bond episodes.

All of your John Wayne favorites are discussed inside of Three Bad Men as well, though I did get the feeling that he lagged a little behind as the third of these bad men. It felt a bit odd when the chronology ended with Ford’s death, leaving Duke alive at his bedside, though a couple of days removed from the reading experience it feels more like it was the right choice to shut this story down once Ford shut down.

Scott Allen Nollen has attempted something very difficult with Three Bad Men and it largely works. He’s taken three lives and three careers and made them into a single story. This could become confusing and every so often did throw me for a little loop, though that was usually because of a fourth or fifth person’s story poking its way into the lives of our Three Bad Men. Nollen has an encyclopedic knowledge of film history that might overwhelm less through an occasional chapter heading or perhaps even sidebar.

While fans of Ford and Wayne are going to tread familiar ground I think they’ll appreciate how that information blends into Nollen’s overall theme linking the two with Bond. There’s no denying that each of the three could be rotten human beings at times and that they brought out the worst in one another as much as they brought out the best. Really three hard men is how I left the book thinking of them, because each seemed as determined as they were difficult. Individually my general perception was of Bond as blowhard, a lovable one unless you were on the receiving end of his bluster; Wayne, self-interested, perhaps self-aware, yet best able to get along with others; Ford as Pappy, no doubt, to be revered, but Katie bar the door if you don’t! He also seemed least sure of himself away from the creative process, thus the legendary drinking binges.

As an introductory text, there’s an awful lot here. It can be a bit of an effort, but worth the payoff. I mentioned how well the sections about Wagon Train teased me towards the series, well; when I began that section I dreaded my arrival. I have never seen the show and was ready to glaze over from information I expected to be irrelevant to my own reading experience. Instead it whet my appetite. It should do the same for readers new to any of the movies. While I didn’t always agree with Nollen’s appraisals (Personally, I can’t stand The Quiet Man) they did make me want to reevaluate some that didn’t originally score well with me and I did actually watch a few again while I was reading this book (Young Mr. Lincoln and Wagon Master, for example).

So, for me, it was practically an interactive text.

At the back of Three Bad Men are three appendices, the subjects of which best illustrate the main content of the book: The Films of John Ford featuring John Wayne and/or Ward Bond, a Bond filmography plus an entire separate section containing Ward Bond’s TV appearances. It’s a Bond book more than any of the others, but Ford and Wayne figure so largely in his career that they were bound to take major supporting roles in Bond’s story.

I also applaud the author for offering copious chapter notes and a full index. The index guarantees Three Bad Men is a volume I will return to myself whenever I need a refresher in either Ford, Wayne or especially Ward Bond. 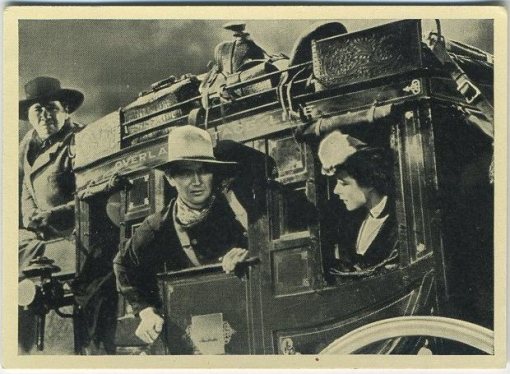 John Wayne in John Ford's Stagecoach (1939) as pictured on a vintage tobacco card.

I’d like to thank the author for securing me a review copy of Three Bad Men: John Ford, John Wayne, Ward Bond from publisher, McFarland.

You can browse McFarland’s assortment of titles at their website www.mcfarlandpub.com or call their order line at (800) 253-2187.

I interviewed author Scott Allen Nollen earlier this year in anticipation of Three Bad Men. You can find that interview HERE.

For other entries about this same title please see the reviews posted at Laura’s Miscellaneous Musings as well as the Western centric sites, Riding the High Country and 50 Westerns from the 50s.

Hover over images for titles — Click any image to browse or buy at Amazon.com. 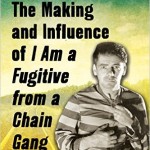 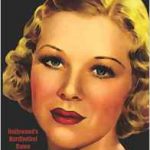 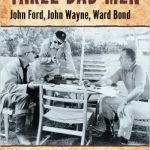 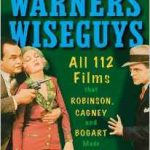 Warners Wiseguys: All 112 Films That Robinson, Cagney and Bogart Made for the Studio

Sir Arthur Conan Doyle at the Cinema: A Critical Study of the Film Adaptations

Abbott and Costello on the Home Front: A Critical Study of the Wartime Films