No actor was more immediately recognizable by his voice than Eugene Pallette. It is variously described as gravelly, sounding like a bullfrog or a foghorn, and several octaves below this, that or the other. Physically, he was often called roly-poly, though we’ll go with the more respectful heavyset. Even on his 1917 draft card, for the war said to have cost him his leading man status, Eugene Pallette is already listed as “stout.” 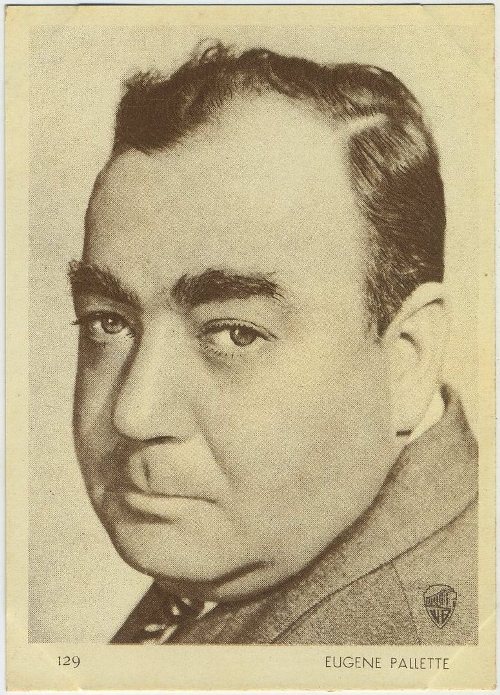 Eugene William Pallette was born July 8, 1889 in Winfield, Kansas. He was second of two children born to William Baird Pallette and his wife, the former Elnora Jackson. Eugene had an older sister, Beulah, who was living with him by the time of the 1930 census after she had divorced.

The heavy-set, gravelly-voiced Pallette made his mark on several major classic films, often managing to become our favorite despite his typically cranky range of characters. Their quick tempers seem to fit perfectly with the overall picture Pallette presents on the screen.

He was Friar Tuck in The Adventures of Robin Hood (1938); Carole Lombard’s dad in the screwball classic My Man Godfrey (1936) and a few years later Henry Fonda’s father in another classic from that genre, The Lady Eve (1941). He shared his best scenes with Warner Oland in Shanghai Express (1932). He appeared as the detective, Heath, in five different Philo Vance movies, more than any actor who played Vance himself! Pallette brought his talents to additional classics: Topper (1937), Mr. Smith Goes to Washington (1939), The Mark of Zorro (1940) and Heaven Can Wait (1943).

Pallette at left in this still from Mr. Smith Goes to Washington. Claude Rains at center with Edward Arnold to his right as the group harangues seated Guy Kibbee.

And those are just some of his talkies! Eugene Pallette was a popular actor in silent films beginning in the early 1910s. You didn’t hear the voice and you didn’t see the bulk. “Believe it or not I was Norma Talmadge’s leading man,” Pallette said in 1940 (Graham). “Of course, in those days I only weighed 135 pounds. Now it’s 250 pounds.” Probably more, according to most reports of the period, some of which could get a little nasty about his size.

All told, the IMDb credits him in 255 roles and dates his movie debut to 1913. Syndicated articles from Pallette’s own lifetime routinely put him in Hollywood as early as 1910 or 1911 and claim a much larger number of overall credits for him: 640 was passed around the wires in 1932 and by 1940 that number had risen to 1,000! At the time Pallette claimed, “I made a hundred pictures a year in my first four years here” (Graham). Seems steep, but remember, these weren’t feature length films but typically one-reelers during this earliest period. He was in some longer films as well: The Birth of a Nation (1915) for one.

Was Eugene Pallette even in the movies in 1910? It was a census year and the Kansas born Pallette checked in from Multnomah County, Oregon, a state which will become very important to him later in life. In 1977 friend and business partner Claude Hall wrote that Pallette went to Hollywood in 1911 after having spent a brief time as a streetcar conductor in Portland.

Eugene Pallette trains Shirley Chambers in The Half Naked Truth (1932).

After his rise through silent films was interrupted by war service it was a much heavier Pallette who returned to the screen as a character actor. The advent of talking pictures brought his most distinguishable characteristic to audiences and began the next phase of a very successful career that was soon highlighted by many of those best remembered performances mentioned above.

Pallette’s career may have been cut a little short by either illness or his own eccentricities, and his reputation was later tarnished by an accusation of racism. The latter charge emerged from Otto Preminger, director of In the Meantime, Darling (1944), who not only claimed that the actor was a Nazi sympathizer, but that Pallette referred to Clarence Muse by a racist name on the set while absolutely refusing to eat with him. Preminger reported this to Darryl F. Zanuck, head of 20th Century Fox, and Pallette was supposedly fired and subsequently blackballed from movie work.

Indeed the then 55-year-old Pallette’s career did wind down after In the Meantime, Darling with just a handful of Poverty Row credits. The final film he appeared in was released in 1946.

But how then to explain this 1953 clipping from Jet Magazine?

Pallette had appeared with Madame Sul-Te-Wan in D.W. Griffith’s The Birth of a Nation (1915) during his early time in Hollywood. If he was branded a racist and kicked out of Hollywood for it, what was he doing at this event? Why would he have been welcome? Or, if Preminger’s charges were true, was this just a wink from Jet Magazine to those in the know?

Unless someone can point me to further evidence of the notoriously hot-headed Preminger’s charges, I’m happy to cancel them out with the clipping from Jet. If at all possible I prefer to think well of my old-time favorites.

In 1949 Pallette said his, “retirement from Hollywood pictures … was forced on him by a throat ailment five years ago” (Johnson). Knowing his voice, that sounds reasonable.

Warren William at left with Eugene Pallette and Robert McWade in The Dragon Murder Case (1934). Link leads to WarrenWilliam.com article.

At that time Pallette raised eyebrows with his unusual decision to retire from films and withdraw to his ranch along the Imnaha River in Wallowa County, Oregon near the end of World War II.

Pallette had been talking about retiring from the movies as early as 1940, when he told journalist Sheilah Graham that, “I’m tired. I want to have some fun before it’s too late.” As early as 1937 he had already begun purchasing land in Wallowa County and according to his former partner in the ranch Pallette had even built many of the amenities with his own hands. The ranch became a place where he entertained acting friends who shared his interest in the outdoors, but soon sparked other rumors.

“I’d like to lay my hands on that guy,” Pallette said in that same 1940 interview. “I mean the guy who started the story that I have a country hideaway for actors in case the war or something forces them out of work, or ‘comes the revolution.’”

From Claude Hall's 1977 article in the Lewiston Morning Tribune. Original caption: "The Pallette Ranch, with the old Fruita Post Office in the left foreground, and the private lodge of Gene Pallette on the right." July 11, 1977, page 12A.

In 1977 Pallette’s ex-partner, Claude Hall, wrote that “such remarks would anger Gene,” yet a few paragraphs later said that Pallette, “stored all the staples that his community might need to survive an invasion.”

Pallette remained at his retreat until 1949, at which time “he began disposing of his holdings because of failing health” (Hall).

Eugene Pallette returned to Los Angeles, where he died of cancer, September 3, 1954, at age 65.

More intriguing Eugene Pallette trivia which did not fit into the main body of this article:

He was a close friend of Wallace Reid from the time Reid first arrived in Hollywood. He acted in support of the matinee idol and was one of Reid’s pallbearers in 1923. Reid’s wife, Dorothy Davenport, wrote that Pallette and Reid shared an apartment around 1913.

Hollywood columnist Jimmy Starr refers to an Anne Pallette as Eugene's former wife by July 1922. Anne was secretary to Norma Talmadge, one of Eugene’s regular co-stars. Starr goes on to say Anne Pallette then had an interest in Edward Brophy, an assistant director at that time and later a character actor almost as well known as Pallette himself became. Starr reports that Brophy later married the former Anne Pallette. There are no marriages reported for Brophy on either the IMDb or Wikipedia; however, the 1930 U.S. Census reveals he was married to one Ann S. Brophy, four years his elder.

Pallette had been married at least twice and according to some articles and interviews as many as five times, though somehow, come every census, he listed himself as divorced.

Pallette was friends with Lee Duncan and after the First World War they’d go to the Sierras together to relax: Pallette would hunt and Duncan would train his dog, Rin Tin Tin, for dog shows.

Another Pallette pal was Fred Noonan, the aviation navigator who disappeared with Amelia Earhart in 1937. Noonan wrote Pallette a letter dated June 9 of that year which detailed his and Earhart’s progress. Their flight would disappear less than a month later.