Mr. Dick asks David, “Do you remember the date that King Charles the first had his head cut off?”

“I believe it was in the year sixteen hundred and forty-nine,” David replies, no doubt curious as to why Mr. Dick should ask.

“Well, so the books say,” replies Dick. “But I don’t see how that can be. Because if it was so long ago, how could the trouble have got out of his head, when it was cut off, and into mine?”

“It’s very strange. King Charles’ head is always popping into whatever I write. But, no matter. No matter.”

Mr. Dick rises from his seat and skips over to the giant kite that he’s made to fly with David.

I haven’t seen Lennox Pawle, the actor who plays Mr. Dick in MGM’s 1935 adaptation of David Copperfield, in any of his other movies. It’s only a small handful of titles, but does include a role in The Sin of Madelon Claudet (1931) and bit roles in both Mata Hari (1931) and his final movie, Sylvia Scarlett (1935), which I have seen, but can't recall Pawle. I'm sure I'll bump into Mr. Pawle again--I'll be looking next time--but until that day Mr. Dick will more than suffice.

I’ve been curious about him ever since I wrote about David Copperfield and judging by the Pawle searches on this site every time Turner Classic Movies airs that movie, some others are wondering about him as well.

I included a brief biography of Pawle in my Copperfield post, and unfortunately I don’t have much to add to the story beyond a better grasp of those original details.

John Lennox Pawle was born at Marylebone, Middlesex, England on April 27, 1871, the son of John Christopher Pawle, a London solicitor, and his wife, Maria. You can find a brief (three pages) summary of Pawle milestones as gathered from various historical documents at Archive.org.

Before becoming an actor Lennox Pawle worked as a newspaper reporter and is said to have owned a racing newspaper at some later date.

He began his acting career at Sarah Thorne’s Dramatic School some time around 1890. His stage debut came later that decade in Ticklish Times. Pawle gained experience in London, where before the turn of the century he was already known as a comic actor, and eventually became a member of Maude Adams’ Playhouse company.

Lennox Pawle arrived in America in 1910 to play in the Liebler Company’s production of Pomander Walk. Pawle played a retired butler, Brooks-Hoskyns, in the hit play by Lionel N. Parker, who soon provided George Arliss with his signature role in 1911's Disreali. Pomander Walk must have been very popular as well because the Brooklyn Eagle was still referencing it to spark memories of Pawle some seventeen years later!

Pawle also scored on Broadway as a lovable old bookseller in Charles Frohman’s revival of Liberty Hall in 1913.

Perhaps Pawle’s greatest round of press coverage came in another play by Parker, The Highway of Life, an adaptation of David Copperfield performed in modern dress and centering upon Pawle's part of Mr. Micawber. One newspaper claimed this was the first time Micawber had been played in America since 1851! Parker’s daughter Dorothy also appeared in the play as Little Em'ly. 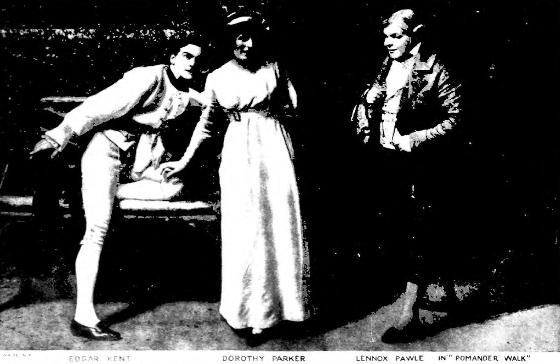 Pawle married Dorothy Parker when they returned to England in 1914. It was Pawle’s second (possibly third) marriage, after having been granted a divorce from Janet Mary Pawle in 1909. Parker, who as I mentioned in my Copperfield article was not that Dorothy Parker, eventually left Pawle behind in America to return to England in 1924. She remarried after Pawle’s death in 1936.

Lennox Pawle remained in England during the years of the First World War, but returned to Broadway in 1919 to play in the opera Monsieur Beaucaire. I assume it must have had a comic role for him to play. Towards the end of the war he had appeared in a few British films and made his American movie debut as Samuel Pepys in J. Stuart Blackton’s The Glorious Adventure (1922).

Lennox Pawle, at far right, as Samuel Pepys in The Glorious Adventure (1922). From Motion Picture, July 1922.

Pawle remained busy on Broadway throughout the 1920s. He made his return to the movies in 1929, appearing in three titles for Fox Films in that single year: Married in Hollywood, The Sky Hawk, a aviation film which gained him some press notice, and for Raoul Walsh in Hot for Paris. Then it was back to Broadway for a part in Florenz Ziegfeld’s production of Simple Simon, a Rodgers and Hart musical comedy, in 1930.

Pawle next appeared in the two 1931 films for MGM, The Sin of Madelon Claudet and Mata Hari, before finishing off his Broadway career in Collision, a flop lasting just seven performances.

Pawle received plenty of positive notices for his small part as Mr. Dick in David Copperfield, but unfortunately he would only appear in Fox’s The Gay Deception and in a small role as a drunk in Sylvia Scarlett before a cerebral hemorrhage took his life, February 22, 1936.

Lennox Pawle's part in David Copperfield is small. Most people remember the movie for W.C. Fields though Freddie Bartholomew, Edna May Oliver and a host of others will gain mention before Pawle as well. And deservedly so. The movie is filled with a cast that seem to have jumped from Dickens' pages to come to life for MGM. But no character makes me smile more than Pawle's simple Mr. Dick, described by Oliver's Aunt Betsey as, "the most friendly creature in existence.” It's impossible to watch David Copperfield without coming away wondering, who was that guy?

"An old and intimate friend."

He was, like many of his contemporaries, somebody whose career has largely slipped from memory. A stage actor of some prominence in the 1910s and '20s, who died before he could really make his mark in Hollywood. He only made it into the movies a dozen times, and a few of those are lost or forgotten. But we have Mr. Dick, and that's enough.

“Don’t pretend to be wool gathering when you’re as sharp as a surgeon’s lancet.” - Aunt Betsey to Mr. Dick

Pawle had the following correspondence between himself and a theatrical manager, Robert Arthur, published in the “Era Annual for 1908.” Those letters in their entirety:

Regent St., October 6, 1902
Dear Mr. Lennox Pawle,
Before I paid you £30 a week for pantomime, I should like to see you in pantomime.
Yours faithfully,
Robert Arthur

Green Club Room, October 8, 1902
Dear Mr. Robert Arthur,
If you saw me in pantomime you wouldn’t pay me £30 a week.
Yours faithfully,
Lennox Pawle

"Your common sense is invaluable," says Edna May Oliver to Lennox Pawle in David Copperfield