This was originally planned as little bulletin intended to point you over to two brand new movie card galleries on the site and alert you to a brand new article at WarrenWilliam.com, and those items do come below, but the passing of Esther Williams on Thursday sadly becomes the top news.

Within hours of the announcement of the passing of the 91-year-old screen legend Turner Classic Movies announced a special 24 hour marathon of Esther Williams movies to air beginning at 8 pm on Thursday, June 13 (presumably Eastern Time). That schedule is as follows:

A longtime friend of TCM, Williams served as one of the network's first celebrity spokespeople and on-air hosts. In 1996, she sat down with Robert Osborne for the second of his extended interview specials, Private Screenings. And in 2010, Williams took part in the inaugural TCM Classic Film Festival in Hollywood.

I last wrote about Esther Williams during TCM's focus upon her as Star of the Month back in May 2011. She was not a star I had previously followed and so in preparation for that post I read Williams' 1999 autobiography, The Million Dollar Mermaid, and used it for background in my preview. You'll find that coverage HERE.

New at my Warren William Site

Late last year I decided to cut back on posting to my Warren William fan site in favor of writing as much as I possibly could for this site. Still, I did not plan to let my Warren site entirely die! Time slipped by pretty quickly though and my coverage of Satan Met a Lady (1936) becomes the first new post on the site in this calendar year!

It's an overdue look at the much maligned middle adaptation of Dashiell Hammett's The Maltese Falcon that just happens to star our pal, Warren William. I chose this week to cover it because, as any of you who looked at tonight's TCM programming already know, the Friday night spotlight is upon film noir writers all this month with first focus on Dashiell Hammett this evening.

The first adaptation, also titled The Maltese Falcon (1931) occupies the prime 8 pm EST time slot. The famed third adaptation starring Humphrey Bogart airs late in the night, at 2:30 am. Our movie, Satan Met a Lady is buried even deeper in the dark, coming on right after the classic 1941 adaptation at 4:30 am.

In fact, I'm mostly pleased that TCM chose to begin the evening with the 1931 adaptation of the film because it's a movie that we'd be calling a pre-Code classic right now if it had turned out to be the only version of Hammett's story. We wouldn't be saying a whole lot about Satan if it held that honor, except maybe at Warren William.com.

Somehow I had a gallery of the Second Series of Player Film Stars up on the site, but missed the First and Third Series until now. I already had scans of the complete Third Series prepared and I just got in a set of the First Series (plus another of the Second) that I scanned this week, so it seemed like a good time to add a couple new galleries to the site.

Here's the menu for all three: 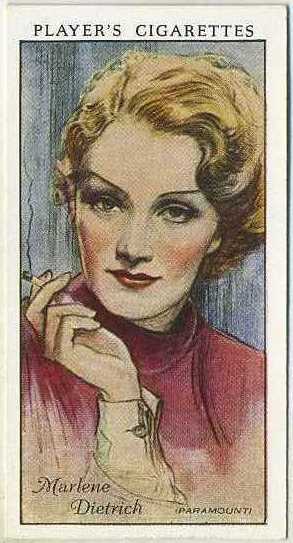 Enjoy! Back soon with more.

Have a wonderful weekend,
Cliff