More gangsters and G-men, but this time the focus is on the teenage son of our ruthless killer.

Roosty (Gene Reynolds) is the doting son of Public Enemy #1, Martin “Stuff” Nelson (Edward Arnold), a vicious gangster whose fatherly advice includes shooting lessons (”Never let a guy get closer than four paces”) and an entrepreneurial outlook (“My racket is a business. And I got a big stake in it. Including a nine year jolt I spent in stir. But that’s part of the overhead.”).

I should point out that this now obscure 1941 production from MGM has nothing to do with the much better recalled Lon Chaney film of the same title from 1920.

This movie was based on a 1938 play by Martin Berkeley. Berkeley is notorious for later emerging as top name dropper to the House Un-American Activities Committee, but no doubt fondly recalled by ‘50s science fiction fans for his work on the scripts of genre classics such as Revenge of the Creature, Tarantula (both 1955) and The Deadly Mantis (1957). His play Roosty, from which The Penalty was based, lasted a little over a week at the Lyceum Theatre. The Broadway buzz at that time was all for Thornton Wilder’s Our Town, which opened at the Morosco the very same night, having moved in after a brief run earlier that month at another theatre. The papers gave Our Town the headlines; Roosty managed a mention.

While Berkeley actually was an MGM employee by the time of The Penalty, Harry Ruskin and John C. Higgins worked on this screenplay. The basic idea of Berkeley’s play, which saw the son of a gangster paroled to a farm, remained intact, but the film seems to split the story more definitively in two than the play had originally presented it. In fact, the first 35 minutes of The Penalty is entirely a gangster movie. After that all of the action shifts to the farm, which appears to have been the main setting of the theatrical production.

Harold S. Bucquet, primarily associated with the Dr. Kildare series, directed The Penalty. The movie features Kildare’s own Dr. Gillespie, Lionel Barrymore, co-billed with his old sparring partner from Oscar winner You Can’t Take It With You (1936), Edward Arnold. The two great character actors share but a single scene in The Penalty and Barrymore doesn’t even show up until nearly the 50-minute mark! When he does he’s crusty to an extreme, filled with curses of dag rattit and folksy observations such as this one:

Lionel Barrymore with Gene Reynolds. Gloria DeHaven in the back seat.

Barrymore’s most extended scene is his first. It comes with the actor, who had broken his hip a few years before, comfortably set in a chair spouting off in typical fashion. After that the poor guy is propped up and leaned in a host of not quite convenient settings that make you wish the studio would have just issued him a paid leave. In addition to Barrymore's lack of mobility I don't think I've ever noticed his arthritis as much as I had in The Penalty, especially in that first scene where he grasps his pipe inside his crooked fingers, waving it for emphasis. He's all knuckles. Old Lionel is broken here, but he still commands his every scene and puts on a bit extra just to make sure. It’s amazing that he will appear in more than two dozen movies over the next eleven years!

The pose captured on this original publicity still is not actually in the film. Left to right: Gene Reynolds, Edward Arnold, Lionel Barrymore. I've wanted to see The Penalty ever since I first came across this image.

Edward Arnold gets the most interesting role in The Penalty as gangster Martin Nelson, who gains his colorful nickname through his trademark phrase, “That’s the stuff.” Arnold rules this movie in the early going, splitting time between robbing banks and offering advice to his son, whom, give Arnold's Stuff this much credit, he imagines setting up in legitimate business after one last big score. Arnold is such a force that it isn’t even a stretch to believe he has the loyalties of beautiful Veda Ann Borg as his moll. At least for as long as he keeps her in chocolates and furs.

After the gangster portion of the film plays out Stuff’s son, Roosty, faces the judge, played by busy character actor Grant Mitchell. He paroles the boy to a farm at the request of G-man Craig (Richard Lane), who wants to use Roosty as bait to capture Stuff. For $22.50 a month—and a chance at a grand prize of $7,500 if Stuff gets captured on his farm—Ted McCormick (Robert Sterling) is happy to have Roosty lend a hand. The payout alone may just save the farm.

Roosty meets Ted’s girl, Katherine Logan (Marsha Hunt), when he tries to run away that first night. By the next morning, after establishing his feud with a particularly nasty gander called Charlie, Roosty begins the slow adjustment to farm life. The movie fails in the pacing of that adjustment.

The most jarring moment of The Penalty comes after Roosty tries to rob the Logans in one scene, only to be found bragging to Ted about winning the debating contest at school in the next. What just happened? Schoolboy Roosty is too big of a surprise, even when it is mentioned that a few weeks have passed. Those few weeks should have been our movie. But Roosty is properly conflicted when the time comes to make the ultimate decision about his future.

Part of me wishes Frankie Darro had been a few years younger and available for Roosty. The other part says Gene Reynolds is okay, if a bit obnoxious in the part.

But then Roosty is obnoxious, at least when dealing with G-Men and hick farmers, and Reynolds is pretty funny when spouting outlandish lies with absolute conviction. Reynolds, who had played Ty Power as a boy in In Old Chicago (1937), was stuck behind Mickey Rooney in MGM’s stable. He shows up in support in Boys Town (1938) and a couple of the Andy Hardy movies, but saw his acting career fizzle when war service interrupted soon after The Penalty. He appeared in a few movies after the war, then in the ‘50s and ‘60s made several TV appearances. In that medium he made the switch from actor to writer-director-producer and achieved his greatest fame—along with six Emmys plus other awards—for his work on programs such as M*A*S*H and Lou Grant.

While I really wish The Penalty had remained a gangster movie and broken off to follow Edward Arnold’s Stuff instead of Gene Reynolds’ Roosty, it still managed to entertain when it turned lighter and stuck to the farm.

According to the Office of War Information records via the AFI notes found on TCM’s page for the film, The Penalty was "disapproved for all export" by the Los Angeles censor board in 1943 because "it is lawless throughout, with killings, juvenile delinquency, and other undesirable features." Well, The Penalty didn’t offer up quite that much sin, but it certainly didn’t adhere to the post Production Code formula of glamorizing the G-men at the expense of the gangsters. While movies were getting darker, and Arnold himself had already appeared in Johnny Apollo (1940), The Penalty has an earlier feel to it. The Penalty is a gangster movie softened by its move to the country and offering up our morality lesson by keeping the focus on Roosty rather than Stuff Nelson.

Forget the billing, Gene Reynolds is the star of The Penalty. Edward Arnold co-stars for the first half of the film with a fun supporting performance by Veda Ann Borg as his moll. Richard Lane’s FBI agent is most prevalent in this portion of the movie. When we move to the farm Robert Sterling shares the most time with Reynolds’ Roosty. Emma Dunn has a few scenes as Sterling’s mother and Marsha Hunt plays his girlfriend. Hunt’s sister is played by 15-year-old Gloria DeHaven and Barrymore plays grandfather to the girls. Grant Mitchell has his single scene dividing the two parts of the movie. Also worth noting the passing through of a very youthful Phil Silvers as a messenger on Arnold’s grapevine.

That cast alone makes The Penalty worthwhile. If you’re tuning in for hardboiled gangster action you’re going to hate the second half of the movie. But if you’re ready to have a few laughs after all of the killing is over, then The Penalty provides some fun scenes and dialogue inside the overall botched job of portraying Roosty’s growth.

The Penalty aired on Turner Classic Movies a few days prior to this writing. The screen captures illustrating this post were grabbed off of my home recording. The Penalty has never had a video release. Yet another title I can easily imagine coming from Warner Archive at a future date. I’ll update this space if it ever does. 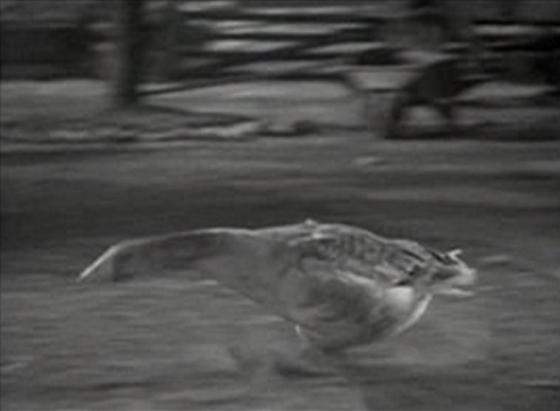 Charlie goes for it.