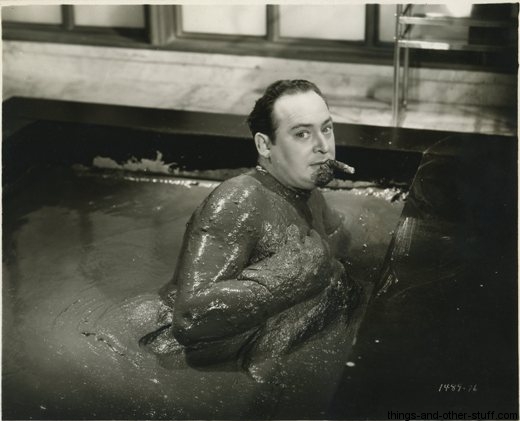 I recently picked up a few dozen vintage 1930s photos of character actor favorite Edward Arnold and mixed in with the pics were some neatly trimmed and very yellow biographical newspaper clippings from the period. I knew I'd written a little about Arnold's early days in another post, apparently very little in fact in my Diamond Jim (1935) review, so I thought I'd add a few lines from the clips I found.

I'd feel remiss if somebody came to this post via Google looking for the most basic Edward Arnold information and I didn't tell them that he was born Gunther Schneider in New York City, February 18, 1890. According to his United Press Association biography from 1939 (one of the clippings) he stood 5 foot 11 inches and "depending upon the demands of his pictures" (yeah right!) weighed between 200-225 pounds.

Arnold, so clear in his speech and, while often gruff, intellectual in his demeanor, actually dropped out of grammar school sometime during the fourth grade. He was orphaned by the age of 12.

Arnold is quoted extensively in the February 1936 issue of Motion Picture Magazine and says of this time "My father was a helpless invalid when my mother died and left us--six children. I was seven and there were three younger. At eight, I was selling papers to help support them. At ten, I was working twelve hours a day in a cellar, soldering jimcrack jewelry for three dollars a week. At twelve, I was a bell-hop in an elegant club, running errands all day and half the night till the bones of my feet ... collapsed and had to be imprisoned in casts for six months."

Returning to the United Press biography, it's written that Arnold had his first attraction to show business at age 11 when he heard his Uncle Hilmer (Schneider?) play bass fiddle at Tony Pastor's--the same club he'd court Alice Faye's Lillian Russell on screen when he reprised the role of Diamond Jim Brady in Lillian Russell (1940). According the bio Arnold got his start on stage three years later, which would make him age 14 in 1904, by joining a settlement house theatrical group. The timing comes pretty close to coinciding with when he would have healed up from the bell-hop position Arnold himself mentioned earlier.

*In John Roberts' much more complete look at Arnold, Diamond Eddie: The Edward Arnold Story, appearing in the October 2000 issue of Classic Images the author writes that Arnold joined the dramatic club at age 12. He also writes that Arnold had four siblings, not the five Arnold himself refers to in Motion Picture Magazine. I'm positive Roberts went well beyond the two period sources I'm using here so I'll stick by his facts and figures. That said everything else I mention here about Arnold's pre-Hollywood life and career either checks out in Roberts' piece or, in the case of his youthful odd jobs, isn't mentioned.

From there he toured with the Ben Greet Players at $25 per week before going to work for Maxine Elliott at $50 per week. At the same rate he appeared in a Broadway production starring Ethel Barrymore which one would think would be the break he needed, but from there he hit a dry streak and "lean years followed." The first dry spell would come to an end in 1915 when he signed a two year deal to make motion pictures with Essanay Studios in Chicago at $125 per week. The studio was shuttered in 1918 so Arnold went back East and worked as a $5-$10 per day film extra in New Jersey. In the Fall of 1919 Arnold was cast in The Storm on Broadway and enjoyed a run of 280 performances.

He'd spend the remainder of the decade performing in Broadway shows and on vaudeville culminating with another hit show, Whistling in the Dark, in 1932, which would directly lead to his return to films on a permanent basis and the career that we're able to enjoy on video today.

. To be honest this entire post grew out of the laugh I got from seeing Arnold as Louis XIII in Cardinal Richelieu (1935) in the final image below.

Up above Edward Arnold is shown first in the mud bath in Thirty Day Princess (1934) followed by a shot as Big Jim Taylor in Mr. Smith Goes to Washington (1939) and then in the title role of Diamond Jim. The Cardinal Richelieu follows that just above and then below I tacked on one more shot of Arnold with Frances Farmer in Come And Get It (1936). 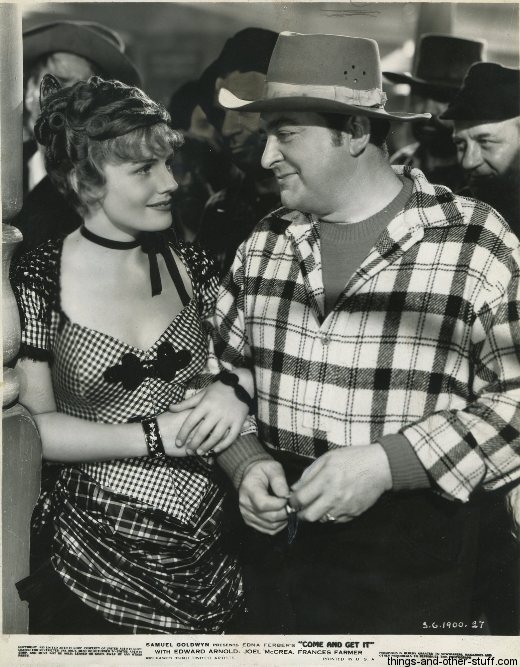