It's becoming quite the coordinated effort, but I updated the Cracker Jack Mystery Club page tonight with information pulled together from Jim Davis and other sources.

Cracker Jack promoted this as a 32 card set back in 1934, but we've now identified 33 different Cracker Jack cards.

You can see 27 different in the gallery on the updated Cracker Jack page ... and we're going to try to get that number up a little more sometime soon.

If you haven't bumped into an Immortal Ephemera gallery over the past couple of weeks you'll notice a slightly different display on that Cracker Jack page. I put a little money into the site recently and one of the enhancements was social sharing and commenting for Gallery images.

I could actually activate this feature site wide, but that seemed potentially distracting. I thought it would be best to restrict these social features to the gallery pages.

That goes not only for the Cracker Jack pages, but for all of my movie card and collectibles galleries and on the individual Site Index pages where all of the articles and images are collected per page for individual film stars.

Speaking of those Site Index pages, they are the one area that I'm still working on after changing the appearance of the website. I've stripped a lot of junk off of those index pages (no more eBay/Amazon ads or filler text) and am currently working my way through the reformatting.

They run alphabetically, by first name (yes, imperfect). So far I've updated through Gregory Peck, so I have a ways to go.

The galleries are my favorite element of these pages as they collect all of the images I've tagged to that star throughout the web site and together create a sort of star-by-star checklist that may be handy to collectors. Check out Claudette Colbert's page for a pretty full example.

Also doing a lot of work in the Immortal Ephemera Store section of the site. Besides the general overhaul that came when I upgraded the site, I recently re-indexed all of the cards and collectibles in the shop. I also reactivated breadcrumbs on the store pages.

Hopefully this makes it easier for you to find certain products while shopping.

I've also begun a mass re-pricing of all goods in the store. I've already significantly lowered prices on all tobacco cards issued by Gallaher and Carreras with plans to attack the Godfrey Phillips section as soon as I publish this post tonight.

I've taken part in Blogathons before, but I'm not sure I've ever so fully embraced a topic such as I have James Cagney. It's made for an enjoyable week of reading and I'm not quite done yet!

I hadn't planned on it when I began reading on Monday, but I'm determined to read, comment upon and Tweet every post in the Blogathon. I've got seven more to go and I'm not quite sure what to do when I get done!

Though my income taxes would probably be the correct answer. Gulp! Got to get going on that, huh?

... And then there's the Mary Astor Blogathon, coming soon! 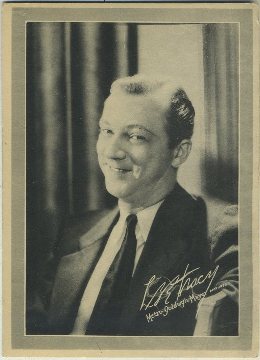 After a busy week of blogging, blog reading and working on all of those behind the scenes Immortal Ephemera tinkerings described above, I wound up with a couple of gaps in my weekly birthday calendar.

I took a breather earlier today to get a few days ahead and almost immediately spotted April 14 as the anniversary of Lee Tracy's birth. It's a shame it's a Sunday, but I'm already hoping Turner Classic Movie runs a birthday marathon for motor mouth Tracy next April 14, when the date falls upon a Monday.

While I still haven't gotten to my planned post about The Nuisance (1933), which became my favorite Lee Tracy as soon as I saw it, I did mention a fair bit about him in my articles about two of his other strong pre-Code titles, The Half Naked Truth and Washington Merry-Go-Round (both 1932).

The Lee Tracy biography, in short:

Tracy was born April 14, 1898 in Atlanta, GA. He made it to Broadway via the Vaudeville circuit in 1924 for The Best Man and had his biggest early theatrical hit in the part of Hildy Johnson in The Front Page in 1928. It was a perfect fit for Tracy who made his first foray into the movies in 1929 and would come to specialize in fast talking journalists and hucksters.

His best remembered movie part is probably as John Barrymore's agent in Dinner at Eight (1933), though horror fans will surely cite his reporter in 1932's Doctor X. He also starred opposite Jean Harlow in Bombshell (1933), perfectly cast yet again as a publicist. But Lee Tracy is the sole star of his most enjoyable movies, including the three I already named above plus others such as Clear All Wires! (1933) and, the first movie I ever really noticed him in, Blessed Event (1932).

Lee Tracy appeared in a number of movies in each 1932 and 1933, but an incident that took place while on location for Viva Villa! not only got him kicked off that film, but stalled his career. 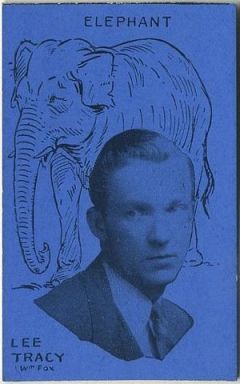 Always one of these in the room with Tracy

Reports vary, but Tracy's undoing took place on a hotel balcony in Mexico. As a military parade passed below, a blind drunk Tracy was said to have relieved himself from the balcony onto, or in the area of, those who passed below. An international incident developed and Louis B. Mayer immediately fired Tracy from both the film and MGM. Tracy denied the incident, admitting only to shouting some insults at the passing parade. But the more obscene story has become the legend and has stuck with Tracy down through the years. Howard Hawks, the original director for the film, backed Tracy up, but also confirms the worst of the details. (Shoot, I was reading Fay Wray's autobiography earlier today and she just referenced it!).

But Lee Tracy continued to work, first in Hollywood "B's," then back to Broadway and eventually in numerous television appearances throughout the 1950s and early '60s.

On Broadway he eventually scored another hit in 1960's The Best Man and was called upon to play the same part, that of a dying ex-President, in the 1964 film adaptation starring Henry Fonda and Cliff Robertson. Tracy received Best Supporting Actor nominations from both the Golden Globes and the Academy Awards for his film portrayal.

I'll be back in a couple of days after I finish up my taxes. Oh, what a way to finish: Death (Tracy's) and taxes (mine). Talk to you soon--
Cliff