Everything aligned in my little corner of the world Saturday night allowing me to steal away from my desk and relax with a marathon of movies that had recently aired on Turner Classic Movies.

If A Wicked Woman (1934) wasn't the first time I'd seen Miss Christians, it was at least the first I'd noticed her. She was fantastic playing mother to William Henry, Jean Parker and Betty Furness (as adults) in this MGM drama released shortly after enforcement of the Production Code.

Ever notice these titles released immediately after Code enforcement, those from the last half of 1934 and even into '35, are still a bit rougher than what follows? Take away the Production Code Administration banner at the front of A Wicked Woman and I'd have thought it was a pre-Code release.

When Mady's abusive husband gets too rough at the open she puts him down and splits town with the kids (Young Henry played by Jackie Searl; Young Parker by Marilyn Harris, who was tossed into the lake by Frankenstein's monster a few years before) to begin a new life. Years pass, Mady moves up in the world, the kids grow into adults. Charles Bickford is Henry's employer and an even bigger fan of Mady Christians than I am.

Bickford wants to marry our Mady, but she had made a vow that she would pay the price for her past crime after her children were grown and could fend for themselves. That time is now. Not good for Mr. Bickford. Mady's choice leads to the exciting, if predictable, climax.

A Wicked Woman was one TCM had aired on Charles Bickford day. I had previously written in much greater detail about another gem aired that day, Panama Flo (1932).

Next I moved on to a couple of the earlier features from George Brent's birthday.

Bette had a crush on Brent back in high school and had left town after she lost out to Dvorak. She remembered football hero Brent as larger than life. Face to face they both realize Brent has fallen way short of what everyone had imagined for him.

Brent storms home after Barrat pushes one wrong button too many and Dvorak inspires him to independence, finally succeeding when she surprises him with a larger than expected savings account.

In a total stretch that I was happy to buy, Brent opens up his own ad agency.

There's a wonderful scene shared by Brent and Dvorak when they have too much to drink and Dvorak's delightful drunkenness is topped moments later by Brent's solo act when he heads out alone to stalk and poach one of Barrat's biggest clients, played by John Halliday.

Brent lands Halliday, but only on condition that he hire on Bette to write his copy.

As Brent soars to success he leaves Dvorak behind and becomes involved with Bette. Halliday sets his sights on Ann.

Wraps up predictably, but fun getting there. Good stuff too from Hobart Cavanaugh as Dvorak's brother, Ruth Donnelly as Cavanaugh's wife and Joseph Cawthorne doing his usual fast talking word shuffle as Brent's first client.

Also enjoyed the earliest scenes, which really put focus on Dvorak as middle-class Depression-era housewife. Got a kick out of some of the prices and salaries reeled off in conversation as a hectic day begins in the Brent-Dvorak household.

(Though if things were that tough you would have thought they could have spared the expense of having a maid!)

I didn't think too much of my next Bette and Brent feature, Front Page Woman (1935), which basically revolves around Brent's egotistic insistence that no woman reporter can work as well as any man at the job. Especially him. Even if that woman is the woman he loves.

Brent gets a little too cute with his one-upmanship of Bette leading to a scene revolving around a big court case which sees him push too far for me to forgive him. Bette does though.

By this time it was about 5 in the morning and I was debating whether I should start another movie or not. I grabbed a semi-recent disc I'd burned with four unfamiliar 1930 titles on it that sent me to the IMDb. I wasn't too thrilled by the first three, can't even recall what they were at the moment, but the fourth title was a winner.

Young Bride (1932) turned out to be Helen Twelvetrees next movie after Panama Flo--yes!

Of course, I watched it on Sunday, but I think I'm going to hold off discussing it for now. It might have earned more detailed treatment in a future installment.

I can't leave you hanging on that thread though, so I'll advance the calendar to Monday night when I watched one of those Edward Everett Horton birthday titles I had alerted you to that morning.

The synopsis in TCM's Now Playing Guide sold me on Success at Any Price (1934) from the moment I first spotted it. "A young man ruthlessly climbs the corporate ladder ..." gets me every time.

The ruthless young man is played by Douglas Fairbanks, Jr., who adds a layer to a character who could have easily been wholly unlikable in other hands.

He's an extremely bitter young man who claws his way from the wrong side of the tracks to millionaire status. In the process he throws over his girlfriend (Colleen Moore) in favor of a high maintenance older woman (Genevieve Tobin) that he steals from his generous boss (Frank Morgan).

Rags to riches, like A Wicked Woman, and set in an advertising agency, like Housewife, Success at Any Price seemed to tie together my recent viewing experiences.

Fairbanks, Jr. is wonderful playing the young man who gets everything he set out for yet still finds life empty. Moore is underused and Edward Everett Horton is just window dressing. Nydia Westman reminded me of Una Merkel as the ditzy secretary. 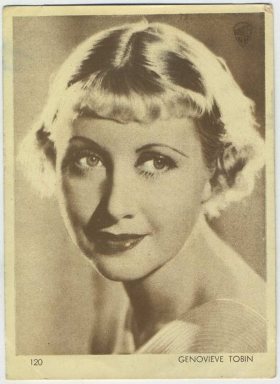 I don't always care for Genevieve Tobin, but I absolutely loved her in Success at Any Price. She plays an upfront gold digger who finds herself tied up with Fairbanks against her better interest. Tobin plays a very raw and honest character for 1934. As does Fairbanks.

Like The Power and the Glory this one may get better with repeated viewings. Both films are such downers that it's hard to walk away feeling positive about them, but each provide their share of calling cards that stick with you, teasing you back for more.

After watching it for the first time all that I am sure of is that I disliked the happy ending which felt tacked on and was a bit hard to take. Otherwise there were enough compelling elements to send me back a second time, probably later this week.

These were all first-timers for me. Did you catch any of them or spot any other goodies that you'd recommend I include in my next marathon?