I cobbled together a pretty strong Edward Edward Horton biography about a year and a half ago, which still read pretty good when I checked it out again Sunday evening. You'll find that post by clicking HERE.

Seemed like a good day to recycle it, especially for newer subscribers!

But the fun for me is to keep digging, so I couldn't resist scanning the online archives to add something fresh about Mr. Horton. You'll find a handful of old newspaper quotes from Edward Edward Horton below the complete TCM schedule, which follows for your convenience: 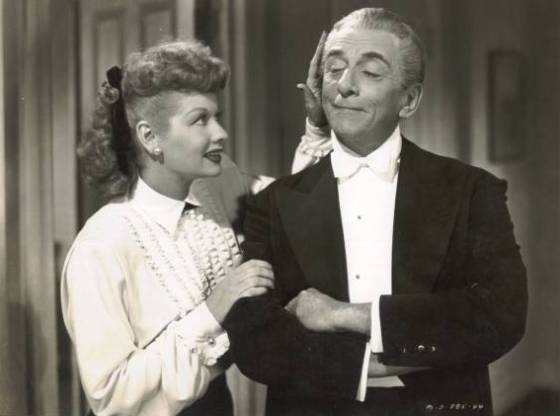 After that marathon comes TCM's third Monday night in March to feature the movies of Star of the Month Greer Garson.

While I like Julia Misbehaves (1948) the best of the bunch (weak ending though) I do want to point to the rarely aired sequel to Mrs. Miniver (1942), The Miniver Story (1950), airing at 1:30 am EST. It's bit of a bummer and doesn't hold a candle to the original, but fans of the first movie probably should check it out.

On young actors in 1960 -- "Gee, they start out with so much. I had nothing--no looks, no voice, no clothes. All I had was this burning desire to be an actor" (Thomas).

"I never started out as a comedian. In fact, when I did stock in the early days I avoided comedy at every turn. It can be so deadly if it doesn't go over" (Heffernan).

"I was lighting up a cigarette in one of my early pictures. Meantime, someone just off the set was telling a story. I became so engrossed in it that the match burned my finger. I jumped and did what was to become my famous double-take. Everyone howled. The director asked me to repeat it for the scene. After that everything they wanted me for was basically comedy" (Heffernan).

"The first butler I ever played was in "Ruggles of Red Gap" in 1923. And everybody remembers me for that part. I guess you might say I was typed" (Finnigin).

"I don't know of people come to see theater, or me as a museum. 'Look, it walks,' they must say" (Finnigin).

On adding rooms to his Encino mansion over the years in 1962 -- "We called them the Lubitsch room, the RKO room, according to where the money came from" (Thomas).