First, early Carey, working for D.W. Griffith in The Musketeers of Pig Alley (1912):

That's Elmer Booth as the Snapper Kid leering at us in this famous close-up. Despite Booth's menace I find my own eye quickly drawn to Carey behind him. That's obviously not the intention, but hey, it's Harry Carey!

We get a better look at Carey as Booth begins to move forward out cameraman Billy Bitzer's view:

Twenty-seven years later, after a career filled with ups and downs which saw Carey achieve his greatest fame in Westerns, Frank Capra brings us an entirely different Carey as President of the Senate in Mr. Smith Goes to Washington (1939).

While this specific image isn't as iconic as the first it's the best I managed to capture of Carey in a part marked by smiles, smirks and gavel hammering: 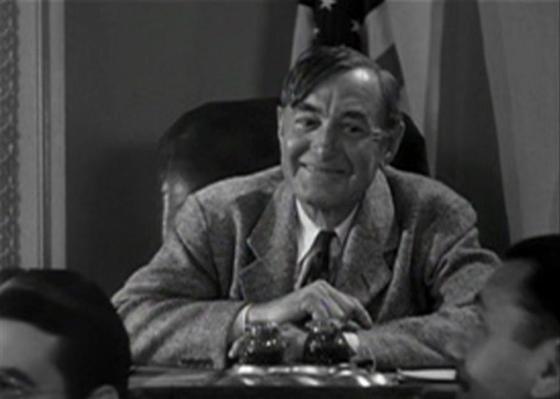 Vicious criminal in the first set of images. Underling. No good gangster. This early view of Carey sees him as a character who sets a low price on life, be it his or his rivals. And he looks the part.

Caring statesman. Leader. Empathetic and warm. Capra's Carey is marked by a genuinely kind disposition towards Jimmy Stewart's Jefferson Smith, not because of politics, just because he likes the kid's spunk. And he looks the part.

No long post today. Just several other views of Carey as captured on trading cards and collectibles throughout his career.

Following the images are a couple of interesting newspaper clippings related to Carey and today's post.

Only a few weeks ago Harry's son, the popular character actor Harry Carey, Jr., passed away at the age of 91.

Just in case you wound up here in search of info about Harry, Jr. I'll pass along a few links to obituaries posted by other bloggers: A Shroud of Thoughts, Noir and Chick Flicks, and 50 Westerns from the '50s. That last one also includes a lively dsicussion below the main post.

Back to Harry, Sr.

The New York Times reports upon Harry Carey's theatrical debut on page 3 of their April 27, 1906 edition:

Whatever happened to the Snapper Kid? Actor Elmer Booth? He's been gone a long time, unfortunately under tragic circumstances. Here's the report from The Evening News out of San Jose, California, June 17, 1915 edition. Page 3: Following is D.W. Griffith's The Musketeers of Pig Alley (1912) featuring not only Carey and Booth but Lillian Gish and Walter Miller in key roles as well as a host of other familiar names noted on the IMDb page for the 17 minute film.

Old Griffith co-stars Lionel Barrymore and Harry Carey in DUEL IN THE SUN (1946). Carey died in September 1947, just a few months after the film's New York premiere. He was 69 years old.

You'll find Barrymore and Carey together all those years earlier in THE MUSKETEERS OF PIG ALLEY. Lionel only pops by for a moment with this shot cropped from the action at the 3:30 mark in the video above.