Thought I might do a “birthday post” today. So I pulled out my calendar on Sunday to take a look at which classic movie stars had been born on January 14 and found the stars converging in a strange way. If I were an astrologer I imagine I would have pulled out a bunch of charts to try and figure out just what gives with January 14. Since I’m not I just went chasing trivia instead.

Hal Roach was born January 14, 1892 providing the key link to this little chain.

Roach is most famous for the Laurel & Hardy shorts and features that followed his teaming the pair in 1927 along with his series of Our Gang shorts throughout the 1920s and ‘30s.

Several well known features came from Hal Roach Studios including Topper (1937), Of Mice and Men (1939) and One Million B.C. (1940), before Roach moved into television producing shows such as My Little Margie, The Amos and Andy Show and one we’ll save for mention a little deeper down this page.

Given the scope of Roach’s career the fact that he shared his birthday with a few of his employees is more inevitability than coincidence.

Nevertheless the names caught my eye and add up to a neat piece of trivia to pocket, perhaps for future January fourteenths.

Hal Roach was closely tied to Harold Lloyd, who worked for Roach through the time of features such as Grandma’s Boy (1922), Why Worry and Safety Last (1923). Before those classics, between 1915 and ‘17, they would help one another on the road to prominence in a series of over 50 "Lonesome Luke" comedy shorts which starred Lloyd and were directed and produced by Roach.

Lloyd’s co-star in many of these Lonesome Luke shorts was a teenager named Bebe Daniels, born January 14, 1901.

Daniels was a two month old baby when her actress mother Phyllis Griffin first carried her on the stage during a live performance. By the age of four she was plying the Duke of York in Richard III. As a nine-year-old Daniels starred on screen as Dorothy in The Wizard of Oz (1910) and by fourteen began working regularly beside Lloyd for Roach.

Bebe Daniels remained under Roach’s Rolin Films banner throughout the decade, usually paired with on- and eventually off-screen partner Lloyd, in nearly 150 shorts before moving to Paramount to work for Cecil B. De Mille. She was a dramatic star for Paramount throughout the 1920s but was dropped by the studio when talkies came along.

Their mistake. She had her greatest fame to date in 1929’s Rio Rita for RKO and for Warner Brothers she played what was later the Mary Astor role in 1931’s original adaptation of The Maltese Falcon. Also at Warners she most famously breaks her ankle as Dorothy Brock paving the way for Ruby Keeler’s Peggy Sawyer to become a star in 42nd Street (1933).

While 42nd Street was far more important to Ruby Keeler’s movie career than that of Bebe Daniels, it was surprising to see that the movie did not even gain mention in Miss Daniels’ 1971 obituary from the Associated Press.

As I was recently reminded in response to my Midnight Mary article, so many of these pre-code gems disappeared from view for a few decades making many more familiar to us today than they were to the general public of 50 or 60 years ago.

Above: Bebe Daniels promotional photo, circa 1920

Following that thought I bumped into an interesting view of 42nd Street from Hollywood columnist Bob Thomas when the movie first came to television in 1957. Thomas, who covered so many old movies first hand, begins noting that “ordinarily I shun the old movies on TV. Most of them are like long-ago sweethearts who didn’t age well.” Thomas goes on shuddering enough that I’ll consider him a hostile witness as I continue to quote him.

While he was “prepared for the worst” and sure that “today’s viewer would find 42nd Street ridden with cliches” that “might draw snickers from the younger crowd,” he wound up enjoying it more than he had ever anticipated: “By George, the picture wasn’t bad.”

Thomas calls 42nd Street trite but excuses it as such for being a pioneer. He goes to to praise cast members noting “something beguiling about the youthful innocence of Ruby Keeler,” and calling special attention to “fresh-faced Dick Powell” and Warner Baxter, whom Thomas calls “most impressive in the cast.”

No mention for Bebe Daniels.

Of course, 42nd Street exploded back on the scene in 1980 as the long-running Tony Award winning musical brought to the stage by producer David Merrick.

As for Bebe Daniels her fame in her own lifetime far eclipsed any she had won for her earlier talkie performances.

It was in 1930 that she married actor Ben Lyon, star of Howard Hughes’ Hell’s Angels (1930), with whom she would move to Britain in 1935. There they began starring on the popular radio program Hi Gang! and remained in Britain broadcasting throughout World War II.

After the war Bebe Daniels returned to America to work as a producer for Hal Roach at Eagle-Lion Films before heading back to her adopted home in Britain where she would live out her days with husband Lyon. She and Lyon returned to radio with their children for Life with the Lyons which broadcast from 1951-61.

Daniels disappeared from the public eye after suffering a stroke in 1963. Another stroke late in 1970 was followed by a bout of pneumonia leading to the cerebral hemorrhage which claimed her life in 1971.

Mary Ann Jackson is the youngest of our January 14 quartet, born that date in 1923, and by far had the briefest bout of fame of the bunch.

She’s notable for having been a regular in two separate series: Mack Sennett’s Smith Family series released between 1926-1929 saw her as the mischievous little Bubbles, daughter to series stars Raymond McKee and Ruth Hiatt. You may have caught a handful of Smith Family episodes during Turner Classic Movies’ recent centenary tribute to Mack Sennett—the selected episodes were notable for featuring a young Carole Lombard.

Mary Ann Jackson moved from Sennett’s Smiths to her more famous base at Hal Roach Studios in the Our Gang series of shorts which she appeared in from 1928 until 1931. She played alongside series regulars such as Joe Cobb, Jackie Condon, Jean Darling, Allen “Farina” Hoskins, Bobby “Wheezer” Hutchins, Jackie Cooper, and others.

William Bendix was born January 14, 1906. Remember I held back the title of another famous television show that Hal Roach’s company had produced? In the late 1940s Roach Studios became the first film production company to completely switch their facilities over for television production.

Once more it’s journalist Bob Thomas with the details, reporting that as of July 1953 “the Roach lot has ground out 546 TV commercial and 855 TV films, including … Life of Riley.”

The former singing waiter rose to fame on Broadway in William Saroyan’s The Time of Your Life and made his movie debut in a memorable supporting role in Woman of the Year (1942) starring Katharine Hepburn and Spencer Tracy. The lesser remembered Brooklyn Orchid from the Hal Roach Studios premiered nationwide just a few days after Woman of the Year’s New York premiere and featured Bendix in the starring role as cabbie Tim McGuerin.

When Roach sold the contracts of Victor Mature and Carole Landis during the war years William Bendix remained the only performer he still held under contract (Ward 129). Bendix was loaned out by Roach throughout the decade and appeared in several popular films during this period. 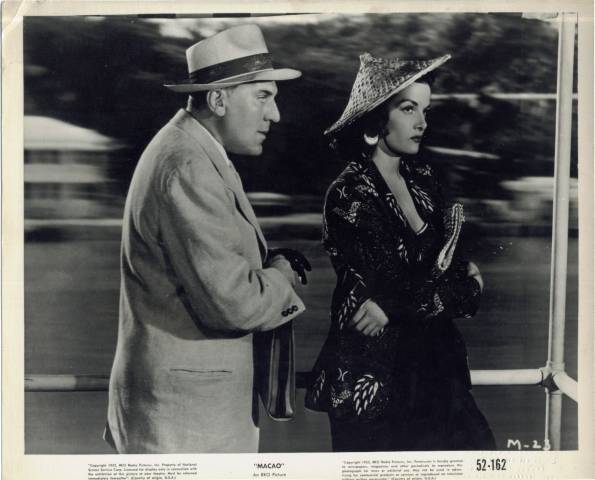 Bendix with Jane Russell in MACAO (1952)

Bendix’s early roles with Roach would lead to his most famous character. Complications arose on what producer Irving Brecher originally conceived as a Groucho Marx radio series. Bendix meanwhile caught Brecher’s eye as he repeated his Brooklyn Orchid role for Roach in two additional 1942 releases, The McGuerins from Brooklyn and Two Mugs from Brooklyn. 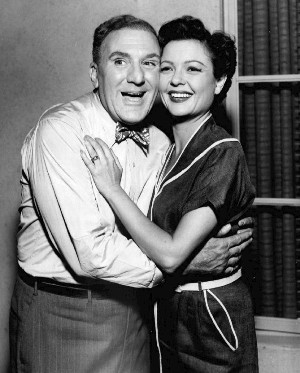 William Bendix and Marjorie Reynolds for THE LIFE OF RILEY

This led to Bendix landing the part of Chester A. Riley for what would be 8 years in the original radio version of “The Life of Riley” beginning in 1944. There was also a 1949 feature film under the same title starring Bendix as Riley as well as the television series starring Bendix and lasting for over 200 episodes beginning in 1953. (Previous conflict for Bendix had put Jackie Gleason in the role for one earlier season, 1949-50.) The series was produced by Roach for NBC.

Bendix continued on as Riley after a 1955 operation for stomach ulcers, but he was ill for the remainder of his life after that health setback. He later sued CBS for $2.6 million claiming they canceled a proposed program co-starring him with Martha Raye because of his illness. The suit was settled out of court, but Bendix wouldn’t have the opportunity to star in another series, dying in December 1964.

Hal Roach sold his studios to his son, Hal Roach, Jr., who had been active in the company for some time preceding the sale. Roach, Jr. got himself tied up with Alexander Guterma, a very colorful figure, and Hal Roach Studios was soon no more.

In 1984 Hal Roach was presented with an Honorary Oscar by former Our Gang members Jackie Cooper and George “Spanky” McFarland. Roach had previously won two Oscars for Best Comedy Short, in 1932 for The Music Box (1932) starring Laurel and Hardy, and in 1937 for the Our Gang short Bored of Education (1936). 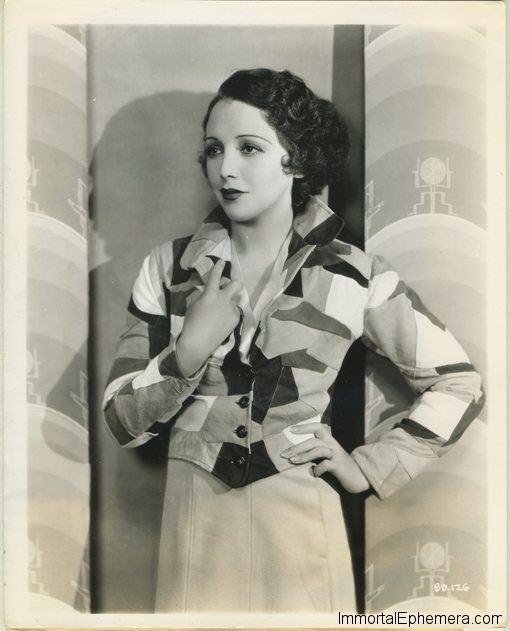