Una Merkel was born December 10, 1903 in Covington, KY. Turner Classic Movies celebrates the 109th anniversary of Miss Merkel’s birth with a somewhat curious ten movie marathon that manages to miss all of her best known films. 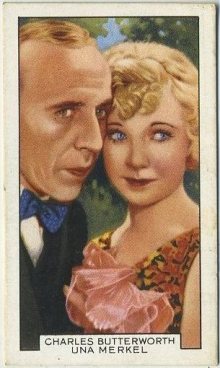 Personally, I’m excited about this pre-code heavy line-up of obscurities which also shows off a whole lot of Madge Evans and introduces me to titles I haven’t seen starring two very different leading men that I like, Lee Tracy and Richard Dix. And once we get to the mid-30s I still managed to smile as I typed out Charles Butterworth’s name twice in a row. TCM did good by me, that’s for sure.

But I’m not so sure it’s the best introduction to Una Merkel for fans that are new to her. She did appear in one or two bigger titles. A few that don’t show up today:

D.W. Griffith’s Abraham Lincoln (1930) would have been a surprise but no 42nd Street (1933) may be just as surprising. Also missing are all four of the Jean Harlow films that Merkel appeared in: Red-Headed Woman (1932), Bombshell (1933), Riffraff (1936) and Saratoga 1937). They just showed Broadway Melody of 1936 for Eleanor Powell’s November 21 birthday, so no gripe there, and I’ll give TCM benefit of the doubt on titles such as Universal’s The Bank Dick (1940), Paramount’s Road to Zanzibar (1941) or even Disney’s The Parent Trap (1961) and assume they couldn’t get the rights to any of them. But what about Warner Brothers’ original version of The Maltese Falcon (1931) or Una’s first comeback in MGM’s On Borrowed Time (1939)?

And then there’s this, probably Una Merkel’s most famous moment on screen:

In case that clip is ever yanked from YouTube it’s Una Merkel’s famed brawl with Marlene Dietrich in Destry Rides Again (1939).

“I’d never met Miss Dietrich before we did the fight. We didn’t use doubles, and we really went at it,” Una said in 1978. “All through the fight she’d whisper to me, ‘Are you all right?’ We went at it tooth and nail” (Second Banana).

Una Merkel was born in Covington and buried nearby, but she moved around a lot as a youngster. Her father, Arno Merkel (1882-1969), was said to make a hobby out of travel: “Just picks a spot on a map at random and goes there” (Harrison). He moved the Merkels north to New York, circa 1918, then to Philadelphia, where Una would complete High School before returning to New York where she enrolled in dramatic school.

Early in her career Una Merkel is noted for having doubled for Lillian Gish in titles ranging from Way Down East (1920) to The Wind (1928). A couple of references from the mid to late 1920s mention Merkel as Gish’s double for long shots in the doomed 1921 Frohman Amusements production World’s Shadows, but I wasn’t able to gather confirmation that satisfied me for any of the other titles.

Her first Broadway credit is probably 1925’s Two by Two, a comedy starring Charlotte Walker in which Una had two lines. It came and went quickly, as did The Poor Nut just a few months later. It was from there that John Golden gave her a job in the Pigs road show after she’d walked into his office asking for work the previous season. She’d also appear in Two Girls Wanted and The Gossipy Sex for Golden before Jed Harris hired Una for what would be her breakout role in support of Helen Hayes in Coquette. 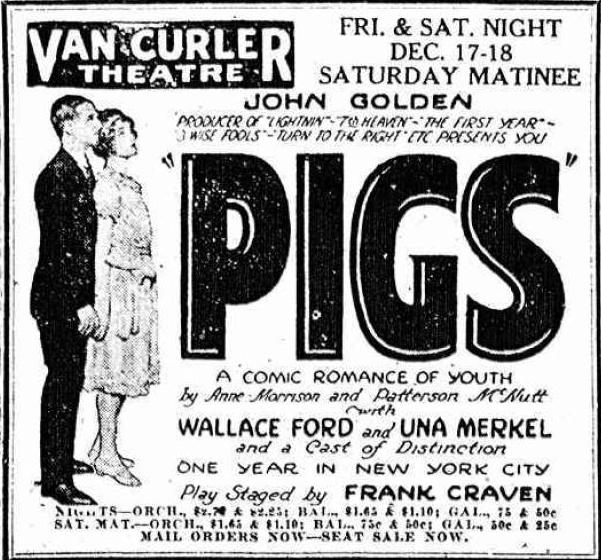 Coquette was followed by Salt Water with Frank Craven and those titles led to Joseph M. Schenck of Universal and legendary director D.W. Griffith reaching out in order to cast Una as Ann Rutledge in Abraham Lincoln.

Walter Huston (looking like Patrick Troughton as Doctor Who) and Una Merkel in Abraham Lincoln. Yes, Huston is Abe.

Una Merkel’s very busy film career followed and she would not return to Broadway for over twenty years.

She was married once, to Ronald L. Burla, in 1932, but they would divorce in the midst of a very bleak period in Una Merkel’s personal life.

Her parents continued to live with her during her movie career and marriage, but it was while in New York in 1945 that Una’s mother, Bessie Merkel, took her own life. She left Una a note, according to one report she stuffed towels under her daughter’s bedroom door to protect her, and then turned on the gas on the stove. Despite her mother’s precautions Una was discovered unconscious in her bed and it took a half an hour to revive her. Una returned to Hollywood but almost immediately suffered a nervous breakdown. It was over a year before she’d return to the screen in It’s a Joke, Son, released early in 1947.

During this time her marriage to Burla disintegrated, though Una blamed their divorce on the war. Burla had been an assistant to the President of North American Aviation during the war years and according to Una he was out of the country for long periods leading to their estrangement and, by March 1947, eventual divorce.

Una’s movie career picked up steam again in supporting parts when just a few years later she overdosed on sleeping pills and wound up in a coma. The incident occurred in 1952, just days before the anniversary of her mother’s suicide and the press decided that Una Merkel had also tried to take her own life.

“Nothing was further from the truth … It was all a terrible mistake. I was ill, but not despondent,” Una said a few months later (Thomas).

“Here’s how it happened. I had been working hard in pictures. Then I accepted an offer to play in "Come Back, Little Sheba" in Phoenix. When I arrived, my leading man was in a play, so we had trouble arranging rehearsals. It was a great strain. To top things off, it was the coldest winter in 52 years.

“When I got back here, I was exhausted. I had gotten a cold, so I thought the best thing to do was to go to bed and get a rest. I was alone, because my father was on a business trip to Mexico City. I called some friends of mine, and they got alarmed and came by. The next thing I knew, I woke up in the hospital.”

Her career resumed and between movies, television appearances and her return to Broadway it was rather busy. She won a Tony Award for Best Supporting Actress for The Ponder Heart in 1956 and received her only Academy Award nomination a few years later for supporting work in Summer and Smoke (1961).

Her personal life passed without further incident lending further credence to her side of the story from the time of the 1952 accident.

At that time Una said she’d spent the past several years having one operation after another, but that she was finally healthy and ready for work if something good came along.

But Una Merkel’s career was already over by then. Her final film was Spinout (1966) starring Elvis Presley and her last professional appearance turned out to be a 1968 episode of the I, Spy television show.

Still, Una was secure thanks not so much to movie star wealth but a rich aunt:

“I never knew she had a cent,” Una said, “but I never cease to be grateful to her.

“And I’m grateful, too, to have been in a business in which you can work as long as you can walk.”

Una Merkel early 1930s 5x7 Fan Photo with MGM Mailer that it was sent out in.