I have no doubt you've seen Mr. Warwick, time and again, as he worked on screen in well over 200 films besides his many later appearances on television.

You probably know him best from something like this:

"But with a little sex in it," suggests Robert Warwick, middle, in Sullivan's Travels (1941) starring Joel McCrea. McCrea is left of Warwick, fellow producer Porter Hall at the right.

Robert Warwick appeared in over 160 feature films from 1931-1959 alone. Sometimes only a scene, sometimes a slightly larger supporting role, but the tall actor was best known for his rich voice and distinctive profile--he had a rather large nose.

Besides Sullivan's Travels (1941), as shown up above, Warwick was a regular for Preston Sturges for whom he appeared in The Palm Beach Story (1942) and also handled small bits in several of his other films as well. Warwick was also memorable as Susan Hayward's father in Rene Clair's I Married a Witch (1942). He appeared in many films for Warner Brothers including several Paul Muni features: I Am a Fugitive from a Chain Gang (1932), The Life of Emile Zola (1937), Juarez (1939); and many of Errol Flynn's best remembered titles: The Adventures of Robin Hood (1938), The Sea Hawk (1940), and Adventures of Don Juan (1948).

The list goes on and on. No fan of 1930s and 40s movies can help but bump into Robert Warwick. Often.

Warwick with Susan Hayward in I Married a Witch (1942)

Yet this all came after the better part of his career was behind him.

After all, when the headlines announced "Bob Warwick Back in Films" in 1930, Warwick was already 48 years old. He was past 50 for all of those classics named above and well into his 60s for some of them. He continued working into his 80s having told columnist Sheila Graham in 1960 that "I get at least one TV engagement a month."

Born Robert Taylor Bien in Sacramento, CA, October 9, 1878. It was while studying music in Paris that the young opera singer met and married first wife, Arline Peck, whose father was a Chicago millionaire then overseas as Commissioner to the Paris Exposition. Miss Peck's parents objected to the marriage and time would prove them right.

Bien changed his name to Robert Warwick when he became an opera singer and it's said that he was to sing at the Metropolitan Opera House, but his voice gave out. Instead he took to a variety of dramatic and musical comedy roles which led to his Broadway debut in late 1903. That show, Glad of It, also included the much more heralded debut of John Barrymore. Warwick was a regular on Broadway over the next 25 years, only slowing down for film stardom and the First World War.

The young star soon drifted from his wife as he toured the country on his own, eventually making the acquaintance of a Mrs. George Whittell, Jr. Mrs. Whittell had formerly been known on the stage as Josephine Cunningham, an Anna Held chorus girl (most references state an early Floradora Girl; see comments) who had found her own millionaire in Mr. Whittell.

Warwick did not contest his divorce from Arline, who charged desertion, and their marriage came to an end in October 1909. Arline was awarded alimony of $3,000 per year and custody of their daughter, Rosalind, then 6. Warwick and the former Mrs. Whittell were married by the spring of 1910.

About this time Robert Warwick was appearing in several of William A. Brady's shows on Broadway and so it was natural that Warwick would make his film debut late in 1914 for Brady's new production company releasing films through World Pictures. The film was The Dollar Mark, and as you can see it garnered some first class ballyhoo!

The electronic display was 60 feet wide and 35 feet high with the letters of Warwick's name standing 9 feet high. The electronic flashing sign was in front of the New York Theater at Forty-fifth Street and Broadway in September 1914.

After starring in a second Brady film, political drama The Man of the Hour (1914), Warwick signed a two-year contract with World Film, who agreed to "pay Mr. Warwick the largest salary ever paid to a stage star for his spare time" ("Robert Warwick Signs"). Warwick was allowed to continue performing for Brady on Broadway where he was then leading man for Frances Starr.

The first two Warwick films were great successes for World and he next starred in the screen's first adaptation of Alias Jimmy Valentine (1915), probably his best known silent film effort today. It was directed by Maurice Tourneur. Other Warwick early films included The Stolen Voice (1915), Friday the 13th (1916), The Heart of a Hero (1916) and A Girl's Folly (1917), also directed by Tourneur.

Considered a heartthrob and matinee idol, Warwick had made a hit in films and receded from the Broadway stage for a few years in which time he formed the Robert Warwick Film Corp. A little later during this period he would distinguish himself during World War I when he rose to the rank of Major and was reported to have been a member of General Pershing's staff. When Warwick returned to acting his films were often advertised like this: 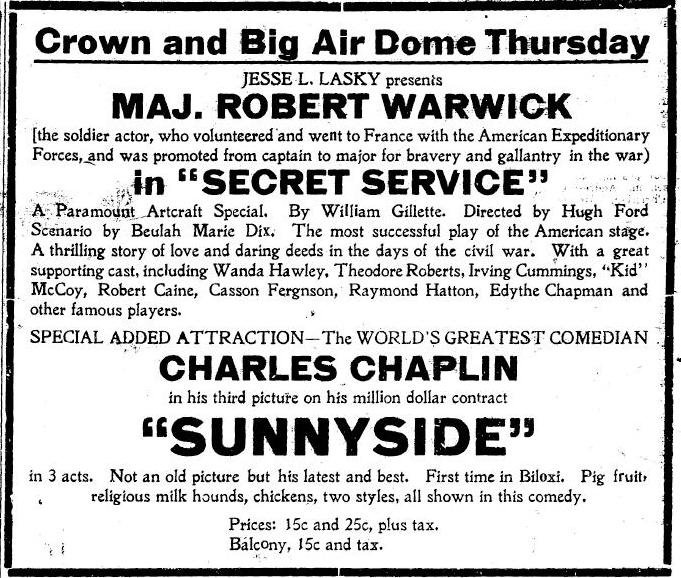 Pretty prominent billing over Chaplin there as well! 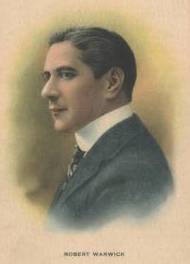 Warwick and second wife Josephine were estranged during the war but were reported to have reconciled upon his return. I can't place Warwick's divorce from the former chorus girl, Cunningham, but he would remarry, likely sometime in the early 1930's. The 1940 census places Warwick with third wife, Estella and then 6-year-old daughter, Betsey. The third Mrs. Warwick would predecease the actor in 1960. Warwick was in his 80s by that time and would not marry again.

Warwick only appeared in a handful of 1920s films as he made his return to Broadway, initially back with Brady and the Schuberts, and he continued to act on stage through the remainder of the decade. Then came that 1930 announcement heralding "Bob Warwick Back in Films" and the long run of one of our favorite character actors would soon lead to many of those classics named at the top of this page.