Carole Lombard was born Jane Alice Peters in Fort Wayne, Indiana, October 6, 1908. When her parents split in 1914, mother Elizabeth Knight Peters settled in California with the children. Jane Peters first came to the screen as a 12-year-old after director Allan Dawn spotted the young tomboy playing baseball. He cast her in A Perfect Crime (1921), where she played Monte Blue's little sister.

It was back to school after completion of her work on A Perfect Crime. But a few years later Peters was spotted again, ballroom dancing at the Cocoanut Grove according to biographer Frederick W. Ott

, this time by Fox executive Winfield Sheehan. Sheehan signed the still teenaged Peters to a $50-per-week contract and she was back on the screen in 1925 as Carol Lombard, taking her new last name from some friends of the family.

Carole Lombard seems best recalled today for getting her start under Mack Sennett, but as columnist Robbin Coons wrote in 1930, Carole had "began very near the top, fell and rose to fall and rise again" ("Actress Wins").

Before Sennett, and immediately preceding the auto accident which slightly scarred her face in 1926, Lombard was leading actress opposite Edmund Lowe in Fox's Marriage in Transit (1925) and also featured in three Buck Jones westerns at the company. Most notably Hearts and Spurs (1925) which afforded Lombard top billing after cowboy star Jones himself.

Hearts and Spurs ad from the Appleton Post Crescent, March 25, 1926

Lombard with Buck Jones from the Sandusky Star Journal, June 16, 1925

About her time at Fox Lombard later told journal Robbin Coons that, "I was terrible, and they let me go after one year ... but the experience helped, and I made up my mind to stick. I went out to Mack Sennett's and got a job and more experience" ("Actress Wins").

In between she dropped completely from the public eye after the auto accident had damaged her cheek. She returned to the screen for Sennett in early 1927 in several comedy shorts, a handful of which were recently shown on Turner Classic Movies during their September 2012 Sennett celebration. In the two I saw Carole played an athletic role in Run, Girl, Run (1928) and a socialite beauty in Smith's Pony (1927), one of the Smith family comedies starring Raymond McKee.

In August 1928 Film Daily reported that the "former Mack Sennett bathing beauty" had been put under long term contract by Pathé and would be appearing in Ned McCobb's Daughter (1928), which she did. Gilbert Swan wrote of Lombard in September that year that "A perfect figure gave her a start," with Sennett, but since leaving eight months ago, "Carol has been kept busy continually filling dramatic roles."

Just a few days later Lombard, along with Marion Nixon and Stanley Smith, signed a new long-term deal with Pathé (Bahn). Carole Lombard's star was rising quickly as the same journalist reported in late November that, "Carol Lombard shortly is to be made a star by Pathé, thanks to a voice test. She has been a contract player for six months and received no particular consideration in the way of assignments."

That seemed as though it was about to change when Lombard was cast in Cecil B. De Mille's Dynamite (1929). Unfortunately, Lombard was instead recalled by Pathé to play William "Hopalong Cassidy" Boyd's leading lady in the routine adventure film High Voltage (1928). But actually De Mille had fired Lombard "because he didn't think she was taking her work seriously" (Eyman 265).

After High Voltage came Big News and gangster film The Racketeer, both in 1929, both starring Robert Armstrong, for Pathé. The studio then dropped Lombard's contract, supposedly when they were "dropping its stars wholesale" ("Actress Wins"), though Leonard Maltin puts the blame on a bit of Constance Bennett paranoia in his 1976 Lombard biography

Lombard next freelanced for Fox in The Arizona Kid (1930), Warner Baxter's follow-up to his Oscar-winning role from In Old Arizona (1928), and she soon earned a contract with Paramount.

It was around this time that Carol became Carole in a move first reported as being the result of advice from a numerologist, but soon revealed as having simply been a studio mistake. In late 1930 Robbin Coons dismissed Carole's name change along with a handful of others:

Kent Douglass probably will have as much difficulty preserving the spelling of his new surname as Carole Lombard will in keeping that final "e" or Evalyn Knapp that "a."

I guess Coons couldn't have known that one of the three film stars he was picking on would become a legend! We have all remembered that final "e" for some time now!

By the Fall of 1930 Carole was advancing with one report noting that "As a reward for her work in the role of the vivacious chorus girl in The Best People, now being completed at the New York studios, Paramount has presented the blonde Carole Lombard with a featured player's contract."

The Best People is actually Fast and Loose, confirmed by a February 1931 Dan Thomas article specifically naming Fast and Loose as responsible for Lombard's long term contract and her next part in Ladies' Man (1931), starring one William Powell.

Lombard told Dan Thomas that, "The only reason I can give for my success, if I am successful, is that I have studied like the devil for the last three years ... If I had studied half as hard when I was in school, I would have been an honor student" ("Study Is"). 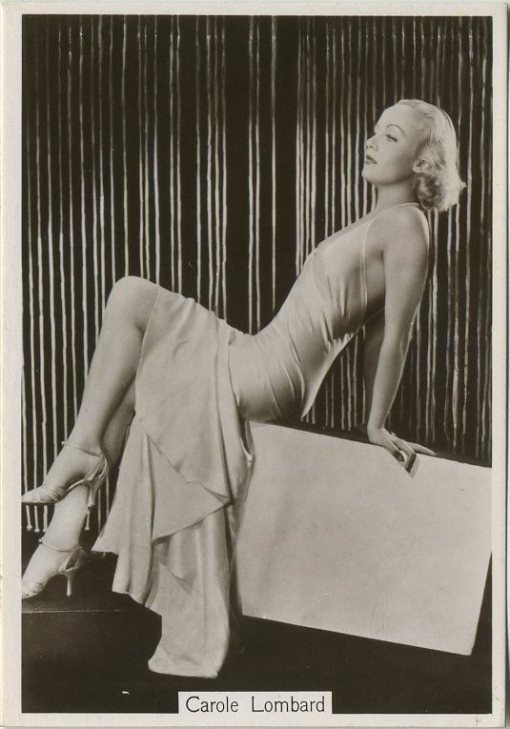 We'll pick up from there some time in the future.

Today's the day to send you to Carole & Co., a site that's been reflecting upon Carole Lombard and classic Hollywood for a long time now!

As someone who runs a separate website dedicated to one classic star (Warren William in my case), I'm always amazed to see how often Carole & Co. is updated with new and interesting articles.

I understand that there is a lot more to talk about when it comes to a screen legend like Lombard than there is for some lesser known stars (ahem, Warren William), but nonetheless Carole & Co. is amazingly prolific for having such a tight focus.

I'd imagine something special hits the site every October 6, no better day to check it out.