What does George Raft have to do with The Story of Temple Drake? Paramount originally cast Raft in the Trigger role eventually played with terrifying effectiveness by Jack La Rue.

The Story of Temple Drake may be a pre-Code release, but don’t forget that the film studios still faced some restrictions. While the films released between 1930 and mid-1934 certainly pushed boundaries much further than subsequent films released under full enforcement of the Code, it’s not as though pre-Code filmmakers could do anything they pleased. Tom Powers and Enrico Bandello still died at the end of The Public Enemy and Little Caesar (both 1931) and so too did other film characters whom it was felt had to pay a price for their misdeeds.

While the Code itself was not yet enforced, local state censor boards kept the studios in check, and so the envelope was never pushed too very far.

The Hays Office was not happy when Paramount wanted to adapt William Faulkner’s Santuary in a film. Paramount pushed forward. Hays’s representatives notified the studio that no film could appear under the Santuary title. Paramount responded with The Story of a Temple Drake, a title which could hook those already familiar with Faulkner’s book by way of the title character. The Hays Office rejected the initial script submitted by Paramount, which sent up red flags for Raft, but production began on January 30, 1933 after a subsequent revision was given the okay by the Hays people.

Within two weeks the following headline appeared on page one of The Hollywood Reporter: “Raft Will Quit Rather Than Play in Temple Drake.” Uh oh.

Raft called the part “screen suicide.” At the time of the controversy Raft’s contract at Paramount was coming up for renewal and he had been asking $2500 per week. His biographer Lewis Yablonsky quotes Raft as asking for a lot more:

“I’ll do the movie on one condition. You put two million dollars in my account. Because when this movie comes out—I’ll be through as an actor. Everyone will hate me. The two million would be my insurance policy” (92).

Paramount put Raft under suspension on February 17, dropping him from payroll and then--I would guess to make him really feel the suspension--picked up his option anyway, renewing his contract on the 21st. It was during this time that Jack La Rue was cast as Trigger. It was another month before Raft and Paramount settled their rift with it agreed that Raft would return to work at the end of March to begin work on his next film.

The Story of Temple Drake starred Miriam Hopkins in the title role with William Gargan as the young lawyer in love with her, Sir Guy Standing as Temple’s grandfather, and William Collier, Jr. as good time Toddy, whom Temple uses for kicks.

Some kicks. After flipping the car Temple and Toddy find themselves under the gaze of Trigger’s (La Rue) flashlight. He more of less takes them captive and heads back to a house filled with bootleggers. Mrs. Fredric March, Florence Eldridge, plays the unsympathetic mother of a baby that Temple fawns over.

“Why do you keep it in the wood box?” Temple asks of Ruby.

“So the rats don’t get it,” comes the reply. 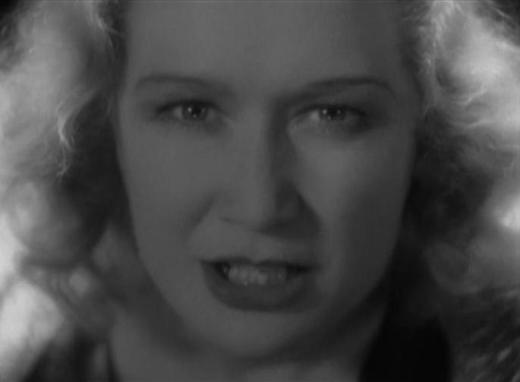 The real notoriety of The Story of Temple Drake comes from the rape scene, severely toned down from Faulkner’s original. Wild girl Temple is ruined by the rape. Rather than returning to society she stays with Trigger. Trigger even tells her, “I’m not keeping you. If you want to go back to that town and to your grandfather, go ahead.” But in an era when rape was often accompanied by blame Trigger’s words are exactly why Temple cannot return to society. She soon explains to him that, “I’m not going back. I’ll never go back. I’ll just disappear.”

Reviews were wildly mixed. The Hollywood Reporter published a sampling of the New York reviews in their edition of May 10.

The News said that “It should never have been bought and never produced,” and that, “the scrap heap is where the picture belongs.”

The Herald-Tribune, on the other hand, loved it: “It is so daring a film, so frank and unabashed in its narrative and so maturely sinister in its implications that it possesses an undeniable fascination … The work is perverse melodrama rather than a cruel social study of a decadent people, but it is pretty powerful stuff.”

The Mirror described it well without actually offering an opinion: “It is an indescribably sordid drama, unrelieved by a moment of comedy or a single sympathetic character … It’s extraordinary squalor is what distinguishes it from other ravishment melodramas.”

But even those reviewers who were morally outraged conceded that The Story of Temple Drake was a well made film. The Hollywood Reporter’s own review of May 11 even said so in the headline: “Best Example of Bad Taste Yet Seen.”

They missed out on Temple’s motivations claiming that she gloried in the rape and remained with Trigger because she had fallen for him. They had more of a problem with their perceived motivations of the Hopkins character than they did with the rape scene itself. “Better the whole thing be left unsaid,” preferring such themes stick to the page where at least they “can be made less repellent by beautiful writing.”

Newspaper advertising tended to concentrate on the more sordid aspects of The Story of Temple Drake and often advised that the film was not for children. One thing the Hollywood Reporter got right in their review was that the main motivation behind the movie was to cash in. And they conceded to theater operators that it would cash in. But they warned, “watch what it may do to your theater in subsequent weeks.”

There was some speculation that George Raft had made the correct decision and that The Story of Temple Drake is what caused Jack La Rue’s then promising career to head in reverse, I can’t help but to notice that the movie didn’t do much to harm Miriam Hopkins. She would soon appear in the classic Design for Living (1933) at Paramount with the enjoyable The Richest Girl in the World (1934) soon on the horizon at RKO.

Jack La Rue, despite an exciting performance in a film which is never as interesting once he departs, soon drifted into bits.

La Rue, in fact, seemed destined to the future Raft had predicted for himself had he lowered his standards to take the part:

“I’ll never be one that takes a bum part, loses the respect of the public, and by-and-by has to panhandle bits while he hears people say, ‘That’s Raft—remember him?’” (Yablonsky 93).

Personally, I can’t even imagine George Raft as Trigger. I don’t think he could have made this character as hard and dark as he needed to be.

Jack La Rue carries it off naturally and in retrospect is probably helped in the part by his anonymity in comparison to a bigger star such as Raft. And perhaps that’s what hurt him afterwards too. Despite universal plaudits for his role of the Priest in A Farewell to Arms (1932), I remember Jack La Rue for the tough guys and gangsters he played.

What do you think? Was this one of Raft’s mistakes? Can you picture him playing Trigger, or do you think we wound up better off with the much less known Jack La Rue?

William Gargan, with his back to us, confronts Miriam Hopkins and Jack La Rue in The Story of Temple Drake