You are here: Home / News - Notes / Was Miriam Hopkins the Sexiest Pre-Code Star of Them All?

Unfairly best recalled battling for your attention versus Bette Davis on screen, or perhaps for not landing the role of Scarlett O'Hara in Gone With the Wind (1939), Miriam Hopkins should be remembered for the sexy and daring run of pre-Code starring roles she played in the early 1930s--they actually make up fully one-third of her list of film credits.

This surprised me, but Miriam Hopkins only ever appeared in a total of 36 features! She only appeared in 10 films after 1940, but many were classics and she spread them out, dotted across the decades, in a way that made her seem more active on screen than she ever actually was.

She was much busier at the beginning.

Miriam Hopkins appeared in 11 films between 1930-33. Four of them are major classics: Three directed by Ernst Lubitsch and one from Rouben Mamoulien. A fifth, The Story of Temple Drake (1933) is among the era's most notorious titles. That doesn't make it the most daring.

That honor goes to her final release of 1933, one of those Lubitsch classics, Design for Living (1933), which may very well be the naughtiest sex romp of the entire pre-Code era. And that's saying something. 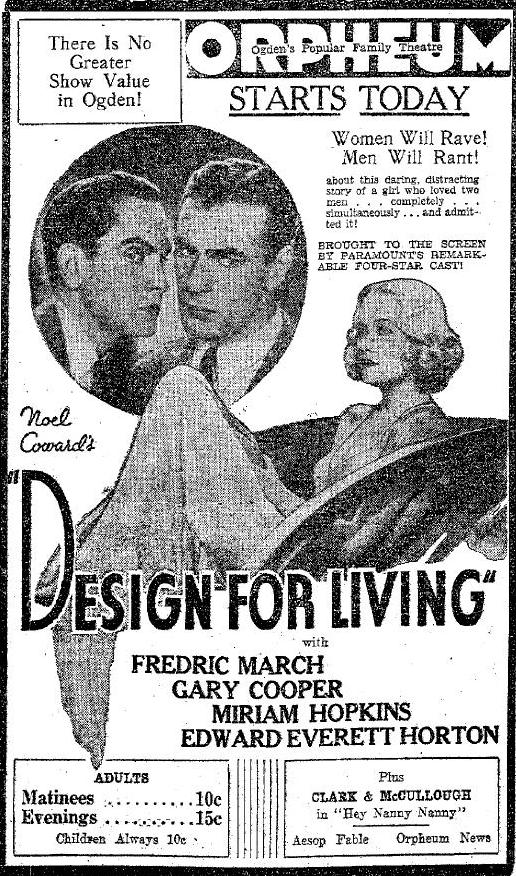 Hover over any of the vintage ads for information about the source.

The diminutive actress from Savannah, Georgia quickly made her way from Broadway to Paramount and spent the first few years of the 1930s in just about every sexual situation that could be brought to the screen. Just the title alone of her first feature, Fast and Loose (1930), gave an idea of what was coming.

Her second movie was her first for Lubitsch, The Smiling Lieutenant (1931), in which her inexperienced Princess Anna intercepts a Maurice Chevalier wink intended for far faster and far looser Claudette Colbert.

Miriam Hopkins and Claudette Colbert in The Smiling Lieutenant (1931)

Chevalier's character is manipulated into marrying Hopkins' Princess, despite the fact that he'd much rather remain shacked up with Colbert's Franzi. But Claudette's a good sport and in the end even teaches Hopkins how to "jazz up her lingerie" in order to completely win over her leery husband. 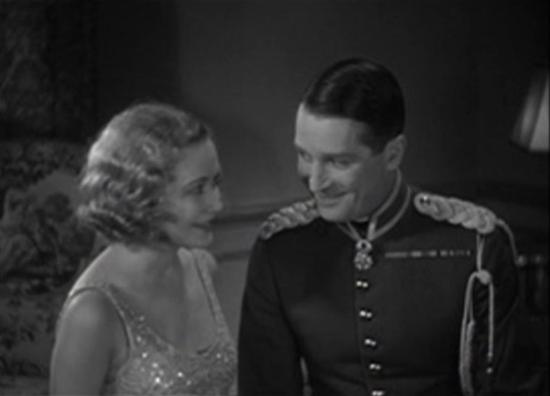 Miriam Hopkins and Maurice Chevalier in The Smiling Lieutenant (1931)

Later that year director Rouben Mamoulian thankfully talked Hopkins into playing the part of steamy caberet singer Ivy over Dr. Jekyll's good girl fiance Muriel in Dr. Jekyll and Mr. Hyde. "Fine," Mamoulien told her. "If you want to play Muriel, you have Muriel. But Ivy would have made you a star" (Eells 94). While Miriam may not as be as well remembered today as she ought to be, she sure is a lot better remembered than Rose Hobart, the actress who did play Muriel! 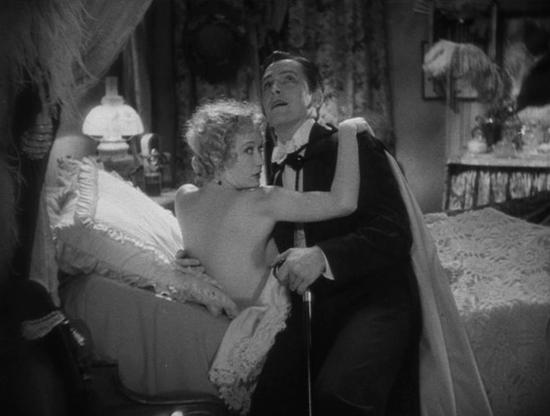 Hopkins caused a bit of a sensation with her initial meeting of Fredric March's Dr. Jekyll: She's completely nude and under the covers in a few minutes, famously swaying her bare leg as Jekyll leaves and imploring, "Come back," in what is practically a sex starved hiss.

Back to Lubitsch in 1932 for what may be the best movie Miriam Hopkins ever appeared in, Trouble in Paradise, in which she assists Herbert Marshall in his attempts at fleecing Kay Francis.

This is one I hope to cover in detail by the end of the year, so for now I'll just say that Hopkins' Lily and Marshall's Monescu fall in love as they prove their talents to one another in Paradise's opening scene, one of the sexiest and cleverest starts to any movie in history. They soon move in on Francis' Madame Colet, but as they work towards their master plan Lily is thrown a curve when Monescu falls for the wealthy Colet. Did I say the opening scene was sexy and clever? The entire film is, from start to finish.

Miriam Hopkins and Kay Francis in Trouble in Paradise (1932)

We recently discussed The Story of Temple Drake (1933) on the site, though more in praise of Jack La Rue than anything else. While William Gargan is as forgettable as La Rue is memorable in the film, it is Miriam's Temple that is the focus. Sex is at the center once again as she refuses to settle down with Gargan because she knows that her cravings would keep her from ever living up to the standards of a good wife. Temple heads out with a young man for kicks, but gets much more than she ever bargained for once she winds up stranded with La Rue's Trigger. Perhaps the pre-Code era's most brutal film. More on it here. 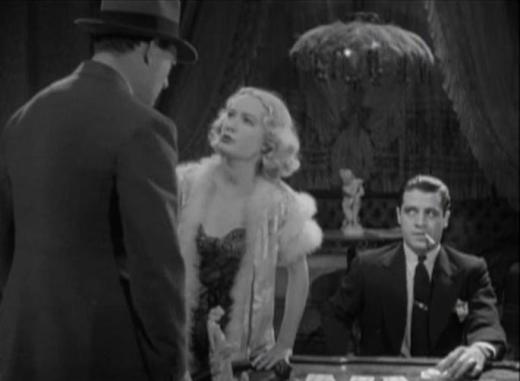 And then as 1933 came to a close Miriam was the star attraction for both Gary Cooper and Fredric March, even if she was third billed, in what I think is the pre-Code era's most daring film, Lubitsch's Design for Living (1933).

Design for Living is a sex film. Like the other Lubitsch titles Miriam Hopkins worked in it's witty and it's clever, and based on a Noel Coward play adapted by Ben Hecht, how could it not be?

Miriam's Gilda meets writer Tom (March) and artist George (Cooper) on a train back to Paris and is soon in love. With both of them. She gives up her position as commercial artist with protective Max Plunkett (Edward Everett Horton) to become a "Mother of the Arts," intending to drive both Tom and George to greatness. A gentleman's agreement is forged: No sex. Like they're ever going to be able to abide that rule!

Okay, for a time they do, and Gilda drives the boys hard, each seeking her approval as much as, if not more than, actual success. It's Tom who strikes first when Gilda finagles to get one of his plays accepted and produced in London. But with Tom gone, Gilda and George are left alone and the tension is immediately unbearable. It's then that Gilda collapses across the bed and famously remarks to George, "It's true we have a a gentleman's agreement. But unfortunately, I am no gentleman." 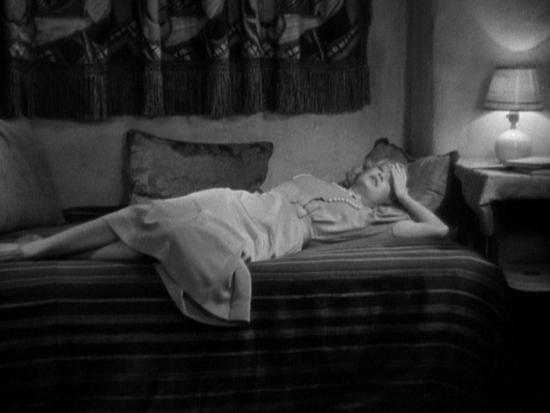 Miriam Hopkins in Design for Living (1933)

Tom soon receives word from Gilda that she's chosen George. But fortunes turn and when Tom comes back to Paris for a visit and finds George away, Gilda's indecision returns. In a scene as hilarious as it is daring Max Plunkett visits the next morning to tell Gilda that he's finally come to accept her relationship with George. On the other side of her bedroom door is Tom, not yet up and about after spending the night with Gilda.

Upon his return George is thrilled to see Tom but it slowly occurs to him what has happened and the boys have a big blow-up that sends Gilda back into the arms of--Max Plunkett. While Gilda marries Max it's likely that he is the only one of the three men she hasn't slept with! Gilda struggles to adapt to society life from the good old Bohemian days with Tom and George, but we haven't seen the last of the two artistic young men who return to rescue her. 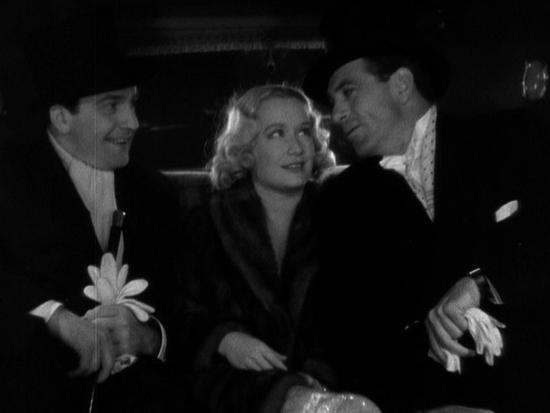 Once the Production Code began to be enforced in mid-1934 Miriam Hopkins had one last great sex comedy, The Richest Girl in the World, which was a bit more adult than what would be allowed to follow. Hopkins is the richest girl of the title and doing her best to land a husband who loves her for herself and not her money. Joel McCrea is her target. I wrote about this one in much greater detail HERE.

From there Miriam Hopkins appeared in many great movies, but with the movie world's own gentleman's agreement now fully enforced sex was almost totally off the table. 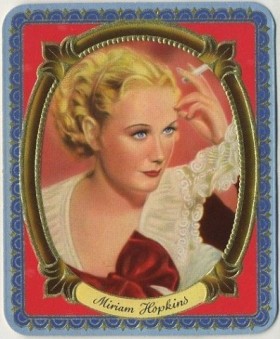 But for a few years at Paramount Miriam Hopkins found herself at the right place in the right time.

Her wound-up youthful sophisticates would have never fit in under the rough and tumble Warner Brothers banner of the period. I picture three years of Ivys in that case!

Hopkins' characters were even a bit too classy for MGM where their iconic leading ladies were often cast as coming from or out of the gutter on their way into those lavish art deco surroundings. Hopkins typically neither started so low nor rose so high.

The characters that Miriam Hopkins played were young and beautiful, thanks to her, as well as witty and sophisticated, largely thanks to Lubitsch. They were good girls who wanted to be bad and, thanks to the era, usually got to be.

Fast and Loose from the Cumberland Evening Times, December 1, 1930, page 4 - Click to enlarge. 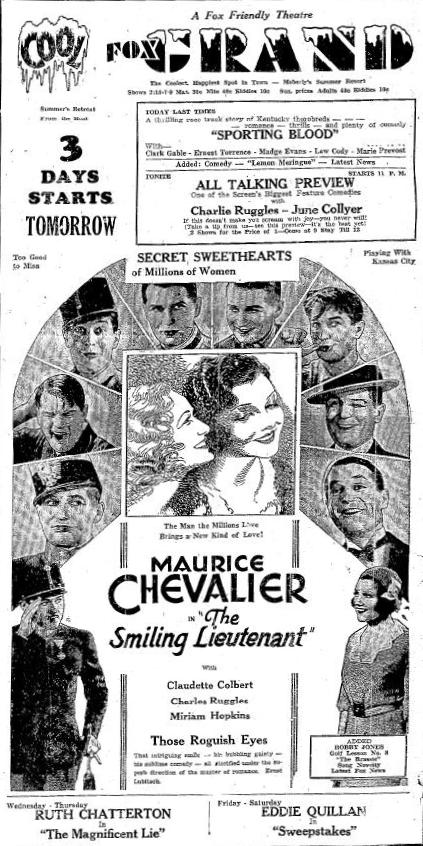 The Smiling Lieutenant from the Moberly Monitor Index, August 8, 1931, page 8

TROUBLE IN PARADISE from the Anniston Star, November 6, 1932, page 7

BONUS TO THE BONUS: Miriam Hopkins, When is a Flapper not a Flapper? From the Bismarck Tribune, November 3, 1923, page 8. 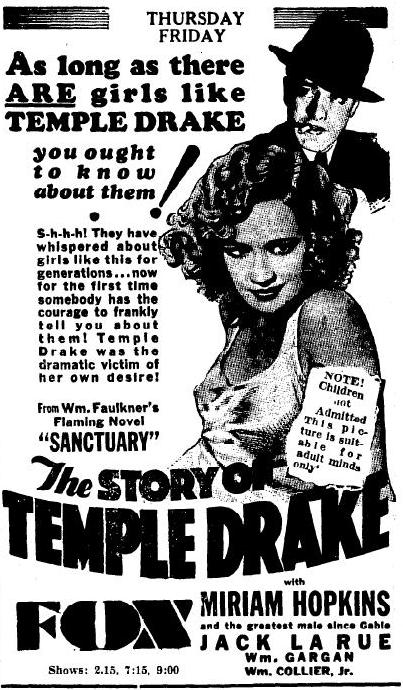 The Story of Temple Drake from the Beatrice Daily Sun, August 9, 1933, page 5

Design for Living from the Logansport Press, January 7, 1934, page 2 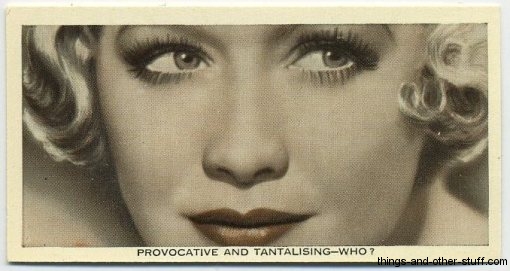 Popularly adapted writer Fannie Hurst in 1889. Hurst wrote novels and stories that were the basis for several popular classic movies including Symphony of Six Million (1932), Back Street (1932), Imitation of Life (1934 and 1959), Four Daughters (1938) and its sequels.

Director Roy Del Ruth in 1893. His long career stretched from 1920 until shortly before his death in 1961, but he's especially remembered in this space for the many Warner Brothers pre-code classics he directed including the first screen version of The Maltese Falcon (1931), several early James Cagney hits including Blonde Crazy (1931) and Lady Killer (1933), likewise many with Warren William including Employees' Entrance and The Mind Reader (both 1933), and many other titles.

Happy 86th birthday to rock and roll legend Chuck Berry today, born on this date in 1926.